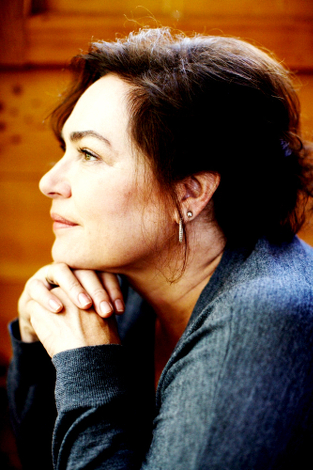 “Not all luck is good luck,” says Amy Bloom, author of the New York Times best-seller Away. Readers anticipating blue skies based on her latest title, Lucky Us, should consider it a caveat instead.

“My wish was not to write a novel in which the good are rewarded and the bad are punished. My goal was to tell a story about these lives, these characters as I come to see and know them,” she says. “Not everybody recovers, and not everybody gets a second or third chance—we love that idea, I love that idea, but it’s not the case.”

Doesn’t Eva Logan know it. By the time she’s 12, circa 1939, life is awfully complicated. “My father’s wife died. My mother said we should drive down to his place and see what might be in it for us,” Bloom writes, by way of introduction.

Mother unceremoniously leaves Eva in the care of Eva’s con-man father, Edgar Acton, who changes her surname so he can introduce her as his orphaned niece. As if that’s not enough to handle, Eva is parked across the hall from a heretofore unknown half sister, Iris. Personalitywise, they’re night and day: Iris is pretty, poised and ambitious, with laser sights set on Hollywood stardom. Eva is more of a polymath, the studious sort.

“Iris saw only what mattered to Iris, but she really paid attention, like a pilot watching for the flashing lights of the landing strip below, her attention the only thing that stood between her and a terrible crash,” Bloom writes. “She said that I was more like someone with a crazy radio inside of me, and half the time the radio said things worth knowing and half the time it said things like, ‘Crops fail in Mississippi.’ ”

Nevertheless, they flee Ohio together. In California, the sisters seem to be on the come up: Iris dazzles the MGM execs and keeps winning bigger parts—until she’s caught kissing America’s Sweetheart Rose Sawyer and blackballed for homosexuality. A sympathetic makeup artist named Francisco Diego offers a fresh start in New York City just as their bad penny of a father turns up at their door.

This unlikely quartet embarks on a cross-country drive. While there’s plenty of action along the way, Lucky Us is a decidedly character-driven affair. “It’s people that I’m most interested in,” says Bloom. “When they take their trip across America it’s not the wheat fields and the sparrows that I write about—it’s more like the hot doughnuts and the weak coffee. You want to serve the story and see the characters. You want these people to be as full and alive and filled with intent and confusion and pleasure and grief as human beings. The goal is to have them be human beings, not just pieces on a chess board of the writer’s design.”

Their personalities may be timeless, but the era deeply colors their triumphs and woes. Set across the Flying Forties, Lucky Us ranges from the United States to Germany to England as World War II brews and explodes. “It was a hell of a time. The fissures that led to cracking open our world socially, culturally—you can see the roots of it all during the war,” says Bloom, who consumed countless books and songs of the era as preparation for writing. “When you’ve set your book in another period, in order for it not to be just ornamental, you have to soak the fabric in it, so to speak. It’s not that you want to look up slang terms so people will sound as if they’re from the ’40sForties. You want to live in the ’40sForties.” A big music lover, she chose songs written prior to 1949 as chapter titles: from “Dream a Little Dream of Me” and “Every Day’s a Holiday” to “You’re Not the Only Oyster in the Stew” and British propaganda march “Hitler Has Only Got One Ball.” “It’s what people did: listened to the radio, went to clubs, sang and danced at home. [Music] was the major form of socializing and entertainment for the majority of people in the country,” says Bloom, who’s a jazz fan.

That love is embodied in character Clara Williams, a ringer for Lena Horne, both vocally and visually, whom Edgar meets and falls in love with in a New York nightclub. With a little resume fudging, he’s styled himself into a British butler for a wealthy Italian family, the Torellis; Iris is the governess.

Eva finds work at Francisco’s sisters’ salon and eventually becomes a storefront psychic, reading tarot for the curler crowd. It’s beginning to resemble a pleasant life when Iris, obsessed with the Torellis’ comely cook, Reenie Heitmann, drops a dime on her competition, Gus, the affable mechanic Reenie married. He’s subsequently sent to an internment camp for Americans of German descent.

Bloom discovered the dark fact of German-American internment in her preparatory reading. “I had no idea that we interned 11,000 Germans in this country—not soldiers, but prisoners of war, people who lived in this country, many of whom had arrived here as small children. Eleven thousand people is not a small number, and the fact that it was approved by Truman to detain Germans after the end of the war, just to keep an eye on them…is extraordinary. Those first-person accounts were very interesting to me, and then the stories of people who ‘self-deported’ to Germany and were then bombed by America—it was hard not to be drawn into that story,” says Bloom.

The farther away Gus is driven, the more active a narrator he becomes. Lucky Us is told through epistolary exchanges and close third-person accounts that present each character’s distinct voice in turn. For their differences, they are equally compelling—and they may be seen as sharing one important trait. As Clara acknowledges to Eva, “some people bounced back from a train wreck and some people couldn’t get over a bee sting,” Bloom writes. The Actons and company are nothing if not resilient.