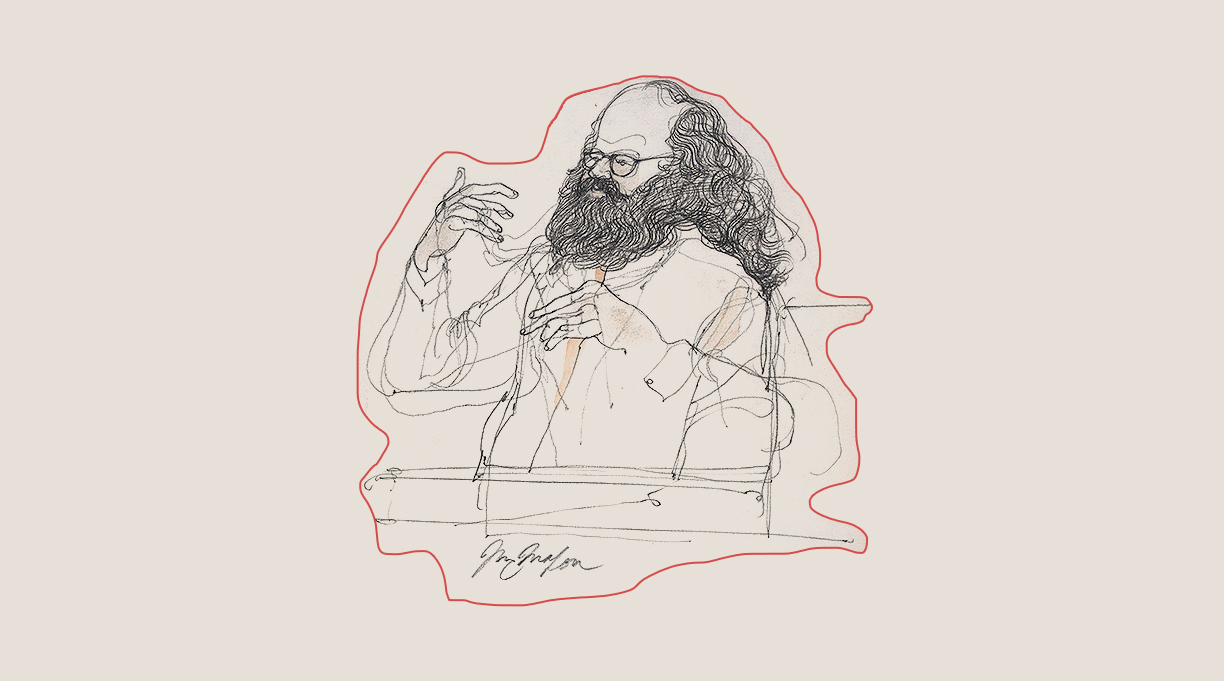 As I was recently rereading Tibetan Peach Pie, a memoir by one of my favorite novelists, Tom Robbins, I came across this description of Allen Ginsberg, an undisputed giant of 20th-century American literature:

“A hot-wired sutra slinger, a Vendantic versifier, a Wurlitzer of howling meat drunk on holy quarters, Ginsberg—invoking the eternal within the ephemeral; wholeheartedly celebrating paradox and confusion as the fundamental fluids in which the human condition hangs suspended (thereby refining our base dissatisfactions into the more luminous chemistry of acceptance, compassion, goofiness, and grief)—Ginsberg had the capacity to cast a net of enchantment around nearly everything in life.”

Prolix? Perhaps. But Robbins has been accused of worse, and I think it’s an apt linguistic encapsulation of Ginsberg and his life’s work—a near-mythic aura that is on abundant display in the latest collection of Ginsberg’s work, The Fall of America Journals, 1965-1971, (Univ. of Minnesota, Nov. 10), edited by Michael Schumacher, who also served as the editor for The Essential Ginsberg and other works. The book provides the backstory to the poet’s The Fall of America, which won the National Book Award for Poetry in 1974, but at nearly 700 pages, it’s far more than just a background study.

In 1965, after receiving a reel-to-reel tape recorder from none other than Bob Dylan, Ginsberg embarked on a journey into the heart of America, initiating what he called his “auto-poesy” recordings. As Schumacher notes in the introduction, Ginsberg “be­gan planning a volume of poems, a literary documentary examining con­temporary America, not unlike what Kerouac had done in On the Road, or what Robert Frank had accomplished in his photographs in The Amer­icans. He would add one important element: the violence, destruction, and inhumanity of the escalating war in Vietnam—an edgy contrast to what he was witnessing in his travels, particularly his country’s natural beauty. The public’s polarized dialogue over Vietnam and, earlier in the decade, the civil rights movement, convinced Ginsberg that America was teetering on the precipice of a fall.”

Based on that passage, it’s tempting—and probably accurate—to draw parallels to our current fraught era, but this book is very much a document of its time, a lengthy, complex dive into Ginsberg’s psyche that may deter readers without keen interest in the poet and his milieu. Schumacher comments on the many difficulties he faced in compiling this comprehensive volume, which “resisted simplicity.” With countless entries in various states of readability, not to mention Ginsberg’s penchant for multiple drafts, Schumacher made the wise choice to “err in favor of authenticity,” a decision that reverberates throughout the book.

Along with the text, which contains “some of the finest of Ginsberg’s spontaneous writing, accomplished as he pondered the best and worst that his country had to offer,” Schumacher gives readers plenty of useful ancillary material. This includes contextual historical information for each year, helpful footnotes, and intriguing photos for fans of the era: Ginsberg with Robbie Robertson and Dylan in front of City Lights Bookstore; attending Jack Kerouac’s funeral in 1969 in Massachusetts; posing in Central Park in 1972 with Phil Ochs, Peter Orlovsky, and Wavy Gravy, among others; in a 1971 photo in Chicago, bedraggled and sporting a T-shirt listing “Indochina War Statistics: 1965-1973”; “Allen Ginsberg’s Family, a mural by Richard Avedon photographed on May 3, 1970”; and one of the true gems, “William Burroughs, with Jean Genet and Ginsberg, meets Abbie Hoffman in Lincoln Park during the Democratic National Convention in Chicago.”

As a literary figure, Ginsberg has few equals, and while this book will likely overwhelm general readers, it’s yet more catnip for Ginsberg fans and students of 20th-century American literature.