An Interview with D. Laszlo Conhaim 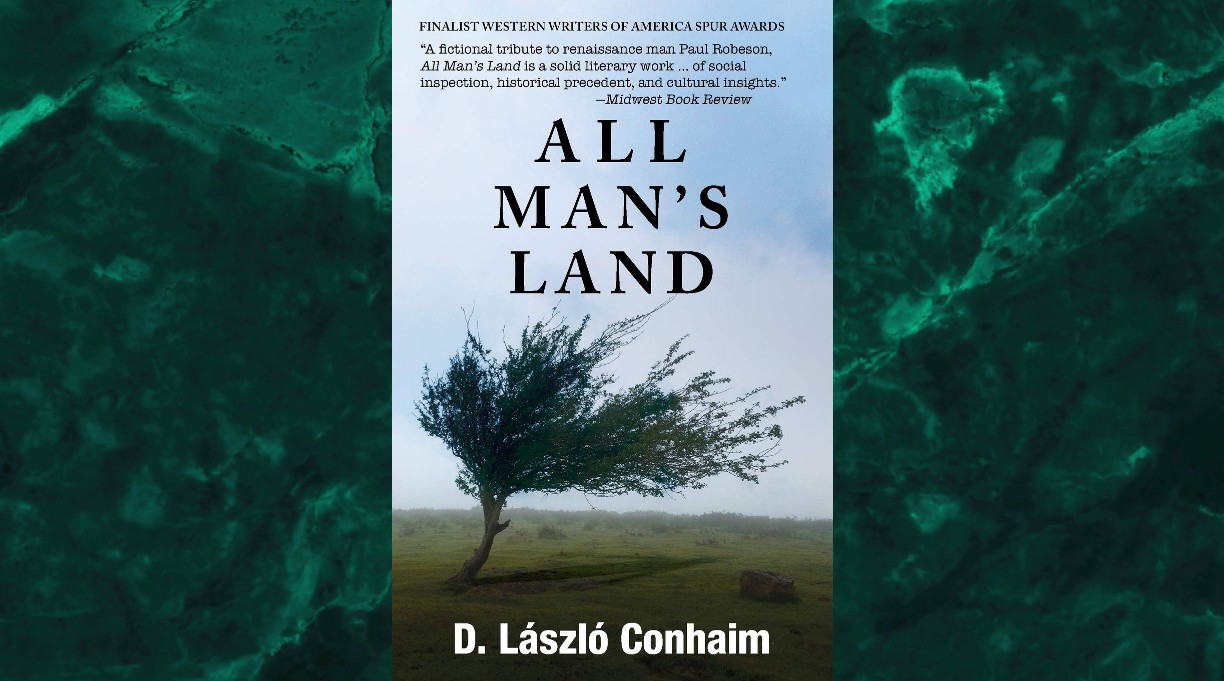 A Renaissance man and activist inspires a multicultural Western

In 1986, Minnesota native D. László Conhaim was exploring his grandparents’ record collection when he stumbled upon an album cover with just one word in all caps: ROBESON. Like many Americans today, Conhaim had never heard of Paul Robeson and found himself wondering, “Who was this mature, tuxedo-clad singer who needed no further introduction?” It only took listening to the first track for him to recognize the power of Robeson’s voice. Soon, he was off on a 33-year journey, which recently concluded with the publication of his latest novel, All Man’s Land. “There was more than music behind that cover,” he says. “There was a story.”

That story of Robeson’s life, as Conhaim would learn, was a fascinating one. An African American born to a former slave, Robeson became a Rutgers valedictorian, an All-American athlete, a Columbia Law School graduate, and, finally, an internationally renowned recording artist and performer in the 1930s. Vocal against oppression in all its forms, Robeson also became a hero to certain Americans, Soviets, British miners, and especially to Conhaim’s Eastern European grandparents. His incendiary statements also caught the attention of the U.S. State Department, however, and Robeson was deemed a communist sympathizer, a blacklisting that effectively ended his blossoming career.

After finding Robeson’s album and learning about his plight, Conhaim couldn’t get Robeson’s music or his struggles out of his head. In 1988, Conhaim was living in a Buddhist temple in Tokyo while working on a Western novel. “I remember envisioning Paul Newman as a stranger riding into a town,” he explains. However, the more he listened to Robeson on cassette, the more he started to see the rider as a Black man. “Next, he became a singing Black cowboy,” Conhaim says. “Finally, the ‘Paul’ I envisioned in the saddle was Paul Robeson.”

That idea would evolve into All Man’s Land over several years as Conhaim completed it for part of his humanities degree at the University of Southern California in Los Angeles. In the novel, the Paul Robeson–inspired figure, Benjamin Neill, comes to a small Wyoming town, and his fight against a malicious, bigoted landowner involves not only classic shootouts, but also songs and sermons to open people’s eyes. As Kirkus Reviews notes of the intriguing hero, “Benjamin is a compelling, multilayered protagonist who moves beyond his Robeson inspiration.”

Conhaim revisited the text periodically but never published the manuscript. He went on to live in Prague and founded The Prague Revue, an international literary journal celebrating Central Europe’s flourishing creative scene in the mid-’90s. In the mid-2000s marriage took Conhaim to Tel Aviv, Israel, where he still lives with his two children. It was also around this time that Conhaim made an important addition to All Man’s Land: a Jewish character named David Cohen (whose family tried to pass as Irish by rebaptizing themselves as the Cohans).

“This is a story that Benjamin, ever passionate about issues of race and especially identity, draws out of David, who is in the process of finding himself,” Conhaim explains. In a pivotal moment in the book, Benjamin tells the young David why the struggles of the Jewish people, of which David himself is only vaguely aware, are important:

To cite the chant of a Jewish sage, The Persians, what boast they?—Our ruler is above all rulers; the Romans, what boast they?—Our Kingdom is above all kingdoms. To realize your potential you must explore your identity, not hide it. Yet that is not enough. You must also open your eyes to other peoples, not look past them or turn away as most men do. And you should know something of the philosophies behind our fledgling and troubled democracy.

In crafting Benjamin Neill, Conhaim grafted on several biographical elements from Robeson and his character traits that Conhaim admired: his dignity, intellectual and physical prowess, courage, and stick-to-itiveness. Conhaim also drew directly from Robeson’s sung version of the kaddish by Rabbi Levi Yitzchak of Berditchev, which Benjamin Neill cites for David before making it into his own battle cry. “The Black-Jewish relationship at the novel’s core expresses what Paul Robeson—as a moral figure—means to me more than any essay I might write about him,” says Conahim.

Conhaim finally decided to publish All Man’s Land in 2017 after releasing his first Western novel, Comanche Captive, and wanting to continue with the genre. He was also spurred to revisit his version of Robeson after seeing that an ESPN list of “The Undefeated: 44 African Americans Who Shook Up the World” failed to include the man he so looked up to. “If Robeson were not a hugely influential figure, the sinkhole that swallowed up his international career—and worse, his public voice for nearly a decade—would not have opened,” asserts Conahim.

A historical fiction about a Black cowboy, which also includes historically accurate language and is written by a White man, seemed like a tough sell with today’s publishing emphasis on “own voices.” Nonetheless, Conhaim was undeterred in getting his story—and the story of Robeson—into the hands of readers. To that end, Conhaim published independently and bookended the final version of All Man’s Land with nonfiction chapters explaining Robeson’s life and his impact on the novel.

Despite the potential for controversy, Conhaim has been encouraged by All Man’s Land’s positive reception (including by several prominent African American reviewers like Professor Emeritus Michael Searles of Augusta University, writing in Western Writers of America’s Roundup Magazine). More than anything, though, Conhaim hopes to draw attention to Robeson himself and to lead others to see him as Conhaim does: a colossal figure of the 20th century. “Robeson was a true Renaissance man whose ‘oneness of people’ message resonates to this very day,” Conhaim says. “He still has much to teach us—by word, spoken and sung, and by deed.”

Rhett Morgan is a writer and translator based in Paris.
MORE FEATURES
POPULAR KIRKUS STARS