An Interview with J J Rusz 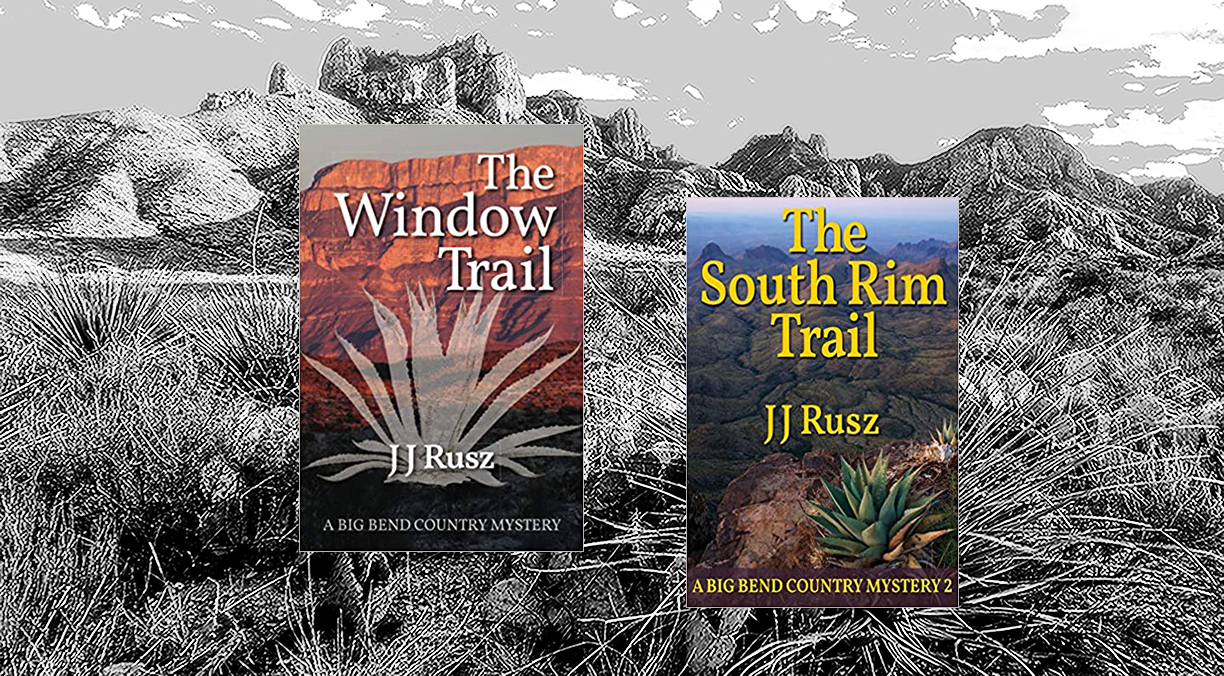 J J Rusz had a long, successful academic career before his retirement in 2017. For 40 years, he taught literature, rhetoric, and writing at the University of Texas at Austin. He wrote or co-wrote several college textbooks on academic writing. In the pressurized world of academia, Rusz once asked a colleague how she relaxed. Her answer was simple: mysteries. She recommended books by Ellis Peters, an English author who wrote a popular medieval detective series.

Rusz was hooked. He tore through one mystery series after another. “A mystery takes you into a different world,” he says. “It allows your mind to relax and float and engage in a world vastly different from your own.” Rusz knows that better than ever now—he’s written two mysteries, The Window Trail and The South Rim Trail, with a third, The Lost Mine Trail, on the way.

Set in his native West Texas, Rusz’s books belong to a rich tradition of “regional mysteries,” which build their fictive worlds in real locales. In its review of The Window Trail, Kirkus describes Rusz as a writer “who clearly knows the territory” and “brings alive the book’s setting, the Trans-Pecos region of Texas.” Of the sequel, Kirkus praises the “appealingly nimble, character-driven tale, deepened by the author’s informed, eloquent re-creation of the series’ far–West Texas setting.”

Though Rusz has lived in Texas for decades, most of those years were spent in Austin. “Austin is a vastly different world from West Texas,” he says. To accurately represent the region, he had to appreciate that difference. “I fell in love with Far West Texas the first time I saw it in 1992,” Rusz says. Over a decade later, he found a place in the mountains outside Alpine. He now spends most of his time there and has developed a local’s sense of the region’s true identity.

“I’ve been here long enough to have a feel for the place,” he says. “I wouldn’t even have tried to write about this place if I hadn’t lived here.” Rusz is proud to report his neighbors enjoy the series. “The ranch lady who lives right next to me just loves the books,” he says. “The native Texans who’ve read the books really like them.”

Rusz takes pleasure in research. “I do the research necessary to get the details right,” he says. “I visit the restaurants, I rewalk the trails.” But sometimes his thoroughness goes above and beyond. “Some of the details aren’t even for the reader,” he admits. “They’re more like a check on myself.” His regional mysteries have to pass his own strict standards of authenticity.

The series features two main characters, Claire Harp, a professor at Sul Ross State University, and Capt. Clayton Shoot of the local sheriff’s office. In The Window Trail, the series opener, Claire agrees to lead a trio of students to the Window, a popular lookout in Big Bend National Park. Other than its beautiful vista, the Window has a new claim to fame as a destination for admirers of Michael Kincaid’s much-praised novel, Madrone. Kincaid, a colleague of Claire’s, taught a student named Mote McRary, who climbed the trail and jumped to his death; Kincaid turned his conversations with the troubled teen into the bestselling book.

He even drove, she noted, like he was riding herd, broad shoulders tracking the angles of a highway that cut through pastures greened up by winter rains and bordered a few lonely cottonwoods—which she’d learned were markers for water. There might be a creek alongside Highway 118. After yesterday’s trip, she knew too this road was a direct route to Study Butte, Terlingua, and the national park itself, eighty miles or so of seductive, mostly empty, pavement.

Rusz sees romance as a key ingredient of the mystery genre. He describes the Claire-Clayton romance as “a structural element of the series.” “When are Clayton and Claire going to get together?” he imagines a reader wondering. “It’s a tension that allows the book to move forward and pull the reader through.”

As he’s continued to write mysteries, Rusz has gotten more and more efficient. Because of “the long evolution of the plot,” Rusz says, “the first book took me three years to write. Since then, the other books have taken a year each.” Rusz reports that he’s much better at plotting than he used to be, and introducing new characters has become a more organic process. For instance, Book 2, The South Rim Trail, introduces Claire’s brother, Alex, star of a TV sitcom; the mystery centers on the disappearance of his co-star.

Rusz fondly recalls the trial and error of his less experienced efforts. “I don’t even remember how I organized the first book. But for the second book I used an elaborate calendar. At one point the calendar program failed.” Fortunately, Rusz had printed out a copy. Unfortunately, his dog ate part of it. Rusz, well versed in four decades’ worth of student excuses, sees the irony. “A friend and I glued the pieces back together.” He laughs.

Rusz enjoys writing his mysteries. “There’s a certain pleasure in coming up with the characters,” he says. He wants that enjoyment to come across in the novels. A devotee of Tony Hillerman, whom Rusz calls “the great writer of regional mysteries,” Rusz hopes his books re-create some of the excitement and authenticity of Hillerman’s Leaphorn and Chee novels about the Navajo Nation Police. “[Regional mysteries] take you someplace you haven’t been,” Rusz says. “I wanted to do that for readers about [West Texas]. It’s not nearly as famous as the Grand Canyon or Santa Fe, but it really is a remarkable region.”

Rusz is eager to publicize the region’s beauties, but he doesn’t mind its lack of popularity. “We don’t want to get too many people down here,” he jokes.