An Interview With Vivian Conan 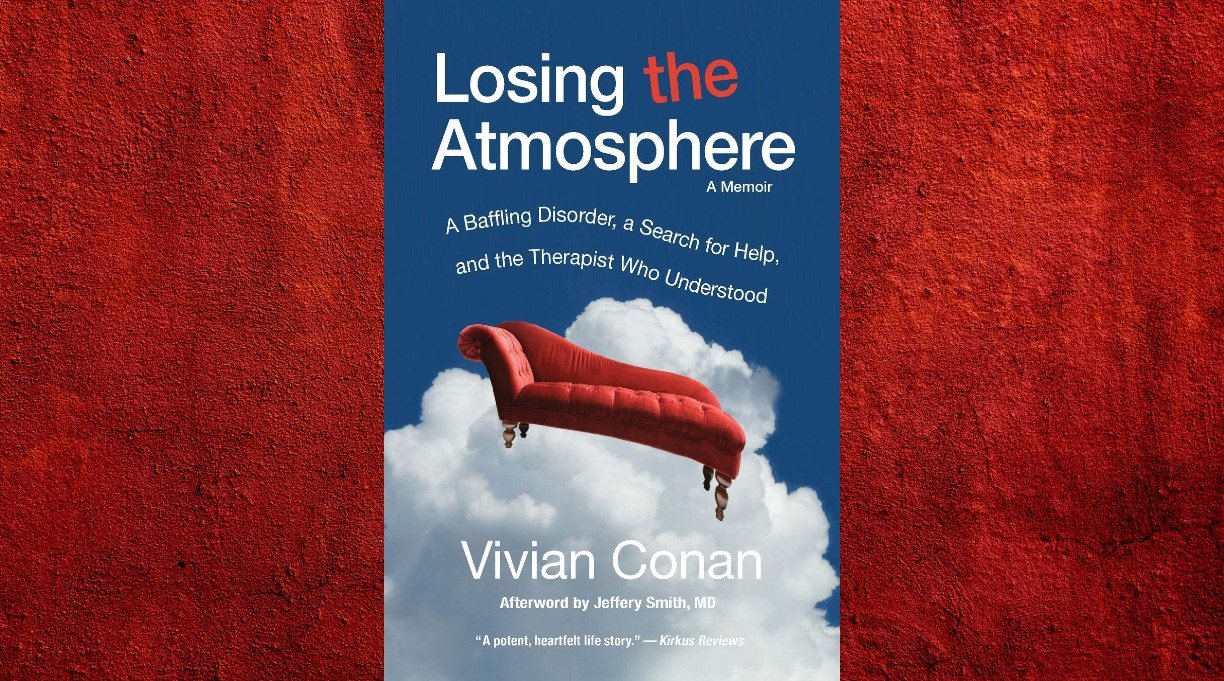 Lifelong New Yorker Vivian Conan holds two master’s degrees, one from the Pratt Institute and another from Baruch College. She has worked as an IT business analyst and a librarian and has had essays printed in the New York Times, New York Magazine, and Lilith, among others. The New York Foundation for the Arts awarded her a Nonfiction Literature fellowship in 2007, and in 2019, the American Jewish Press Association presented her with a Simon Rockower award. But during much of that time spent achieving an education, hitting career milestones in several arenas, and writing for prestigious publications, Conan was also writing about the secret reality of her lived experience. In the opening pages of her memoir, Losing the Atmosphere, Conan describes the battle with mental illness that was invisible to those around her:

I knew that, from the outside, my life seemed unremarkable. Anyone who stood behind me on a supermarket line or sat next to me on a bus would probably have forgotten me seconds after we went our separate ways. Yet for decades I had been dealing with a tangle of symptoms I didn’t understand. In high school and college, I scoured books about abnormal psychology, looking for any label, however scary, that would take away my feeling that I was an alien species of one. None fit. Even in the abnormal world I was a freak. It would take many years, several wrong turns by professionals, and several suicide attempts and hospitalizations before I learned what was really going on. Then came the hardest task of all: healing.

A book 25 years in the making, Losing the Atmosphere is Conan’s story of coming to understand herself and finding medical professionals who could help her do that hard work of healing. Readers start with Conan’s troubled childhood, when she began to detach from reality and build a world she called “the Atmosphere,” then journey with her through adulthood as she searches for answers, adding up to what Kirkus Reviews calls “a potent, heartfelt story.”

What ended up as a memoir began as an article about the day-to-day work of living with mental illness. She didn’t intend to write specifically about herself because she assumed no one would be interested in her personal story. But when she joined a writing workshop and showed them what she was working on, the group encouraged her to put more of herself into her writing. So she wrote a new draft with more personal details, and the group members suggested she abandon the short, impersonal article and write an entire memoir.

Conan did end up writing a more general article, like the one she originally envisioned, and publishing it under a pseudonym. But the idea of writing a book stuck with her. “I felt so invisible, being mentally ill and just having to pretend I wasn’t,” she says. “So the article was generic, but the book [is] about me. I learned from the workshop that people could be interested in me, and that was eye-opening.”

Still, even if she was going to write that book, Conan was ambivalent about using her real name. In fact, for the first 15 years of working on the memoir, Conan intended to keep her identity as the author private. But Conan’s writing workshop continued to be a source of strength and reassurance. “Little by little, I started to own my own story,” she says, and eventually she switched over all the instances of her chosen pseudonym to her real name. “I felt a whole different connection to my own story when I did that; that was major.”

Despite the book’s coming out during the COVID-19 shutdowns of 2020, Conan continued to find connections with readers who gravitated toward the more personal writing in the memoir. She often talks to book groups and does online discussion events with mental health organizations like the National Alliance on Mental Illness. She finds that after these video events close and she sends an email out to the group to thank them for their participation, she often receives a message or two back from attendees who want to share their own stories with her. “It’s very empowering to know that other people are going to relate to your story, [that] you don’t have to be ashamed,” she says.

Though Conan often receives positive feedback from people who have experiences very similar to hers, Losing the Atmosphere isn’t only for readers who are just like her. It appeals to general audiences who are interested in the memoir as the coming-of-age story of a young woman growing up in Brooklyn after World War II as well as to those who don’t have any personal experience with mental illness but would like to learn. After feeling so hesitant to put herself out there in a memoir, Conan continues to discover how many people, even outside her supportive writing group, are grateful for her candor and ability to contextualize her symptoms with what Kirkus describes as “an exhilarating prose style.” There is little diagnostic language in the body of the memoir; rather, readers join the author in her personal narrative, searching and learning and hoping alongside her.

After spending 25 years writing this book, Conan isn’t sure about jumping into another just yet. But she’s writing more essays on mental health, and she works with an organization called Girls Write Now that matches young girls with an adult female writer who can give them guidance and mentorship. Conan loves to work with young people, and she continues to have positive relationships with her mentees after they age out of the program. Readers who are interested in Losing the Atmosphere or any of Conan’s essays can find them, as well as contact information and additional resources, on Conan’s website.

Chelsea Ennen is a writer living in Brooklyn.