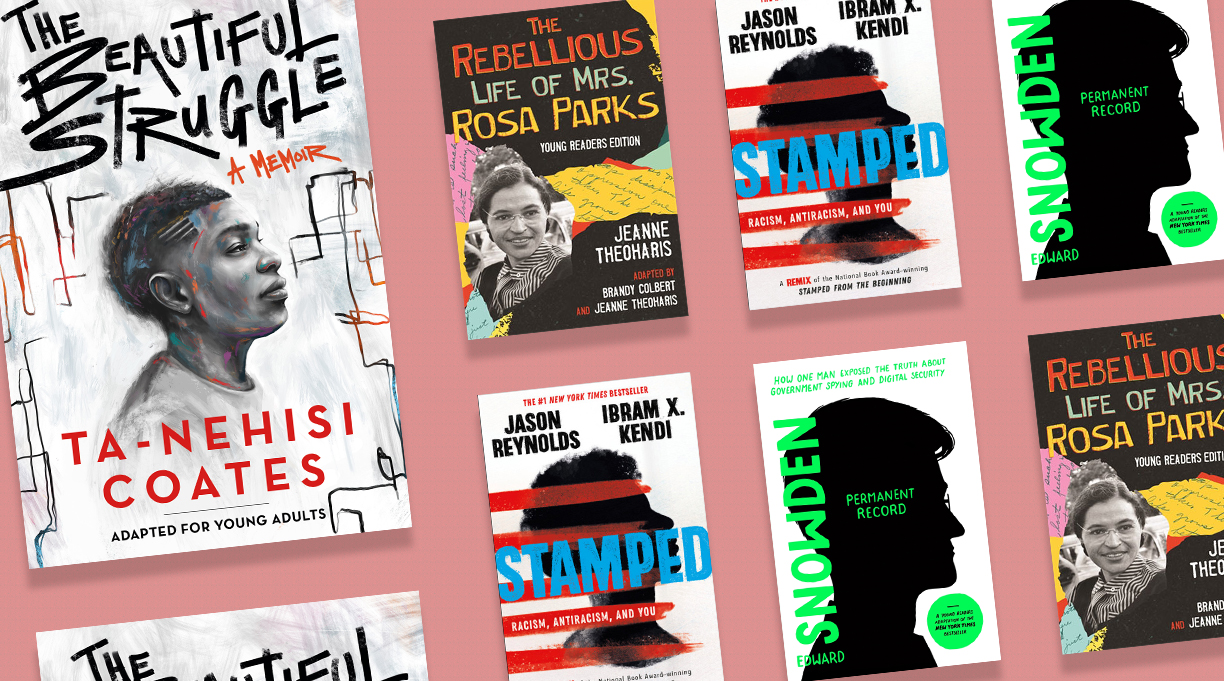 I’ve already read one of my favorite books of 2021. Even though it was first published, in a way, 12 years ago. Let me explain.

Last month, I picked up a copy of The Beautiful Struggle (Adapted for Young Adults) (Delacorte, Jan. 12), a new edition of the first book by Ta-Nehisi Coates. Like many adult readers, I had been knocked sideways by the blazing intelligence and lyricism of Coates’ 2015 book, Between the World and Me, which won both the Kirkus Prize and the National Book Award. But all of the author’s gifts were on display in that 2008 memoir, an account of his coming-of-age in 1980s Baltimore and a portrait of his enigmatic father, Paul Coates, a loving disciplinarian with several children by different women. I’d missed the book at the time it came out; why not get a watered-down taste from this new adaptation for young adults?

What I found, aside from a gorgeous new cover with artwork by Jackie Aher, was Coates at full strength. All the distinctiveness of his prose—the hip-hop rhythms and time-specific argot—was intact, to be read and interpreted by today’s teens. Intact, too, was the powerfully evoked feeling of growing up and struggling to find one’s place in the world as a Black boy. The narrative had been condensed to a bantamweight 176 pages but in no way condescended to its new readers; it trusted those readers to rise to the occasion.

But Coates says he had always envisioned a young audience for the story. “I imagined myself, when I was writing it, as being about 20 years old and writing a book to capture a particular point in adolescence. I always thought I was talking to a kid like me at that age.”

Coates’ publisher, Beverly Horowitz at Delacorte, elaborated on the matter of audience when it comes to adapting any adult title for younger readers. “The most important thing is my initial response to the book as having aspects that will enlighten, entertain, and inspire the young reader. For me, the book as it is—that’s important. I guess you’d say the rule that I apply is that we do not rewrite the book. It’s really respect both for the original material and for the reader.”

Not all YA adaptations operate in exactly the same way; one of my favorite books last year was Stamped: Racism, Antiracism, and You, Jason Reynolds and Ibram X. Kendi’s adaptation of Kendi’s award-winning adult work, Stamped From the Beginning. (I listened to the audiobook, dynamically read by Reynolds.) Here was a radical reenvisioning—the authors called it a “remix”—that spoke to a new group of readers with new language and rhythms.

I look forward to exploring more young adult adaptations in the year to come, especially the nonfiction that will allow me to catch up with works I didn’t read in their first incarnations. Here are two, out next month, to start my list: The Rebellious Life of Mrs. Rosa Parks by Jeanne Theoharis, adapted by Brandy Colbert and Jeanne Theoharis (Beacon Press, Feb. 2), and Permanent Record: How One Man Exposed the Truth About Government Spying and Digital Security by Edward Snowden (Henry Holt, Feb. 9). So what if they’re shorter and more streamlined than the adult versions? That’s not the end of the world for a reader who has far too many titles on his TBR pile.