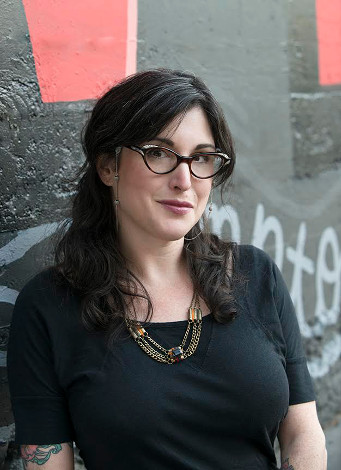 We Were Feminists Once: From Riot Grrrl to Covergirl®, the Buying and Selling of a Political Movement isn’t about Beyonce, but it does take only six paragraphs to get to the subject of the 2014 MTV Music Awards, when she performed with the word “feminist” in giant neon letters as her backdrop. It’s not surprising that it’s a jumping-off point for Andi Zeisler’s new book; she’s a co-founder and the creative director of Bitch magazine (now BitchMedia), which 20 years ago launched with the tagline “A Feminist Response to Pop Culture.”

Zeisler’s aim, though, is more interesting than merely adding to the ever-growing pile of Bey analysis. Rather, the author focuses on the performance as a “capital ‘M’ moment,” one that made it impossible to ignore what she calls “marketplace feminism”—about “choice” rather than equality, individual identity rather than a movement, and consumption rather than social justice. Zeisler elaborated on that phenomenon and her vastly entertaining and informative book via telephone from her home base of Portland, Oregon.

What do you make of the fact that the commodification of feminism seems to be popping up on more radars lately?

It's becoming a lot harder to ignore—the fact that “feminism” has become a marketing buzzword, and “empowerment” has come to seem almost meaningless in the way that it's applied.

The effect it has on some young people can be upsetting—I find myself thinking, “is that what feminism really means to you?”

You see that in things like Kim Kardashian's naked selfie on International Women's Day. There were so many people who were trying to turn it into this moment of feminist pride. I don't think we're at a point politically or socially where we can just start substituting "feminism" when that refers to being confident or being happy with yourself.

Why do you think the timing is significant?

When the biggest pop star in the world is putting her flag in the ground for feminism in front of 8 million people, that's huge. But it was also a zeitgeisty moment. Beyonce was able to claim feminism as her brand in part because of this slow-growing tide that was building up over time on the internet. It was bringing feminist writers, feminist thinkers, feminist concepts, feminist images into, or at least adjacent to, the mainstream. It struck me as interesting that at a time when feminism was becoming so multifaceted, intersectional, and people were having much, much more nuanced conversations about feminism than I'd ever seen in my life, the media was pushing this whole "rebranding" kind of simplification.

Since it seems like everyone and everything seems to be branded and rebranded now, what makes feminism different?

My quibble with people explicitly talking about rebranding feminism it’s about pointing out the ways that other people should find it attractive, taking something that is inherently meant to be uncomfortable, meant to challenge people’s expectations and privilege and saying “look at the fun stuff. “

How do you think your book might affect Bitch, since it has been so focused on pop culture?

Pop culture has been and will remain hugely important in shaping how we individually and as a people understand concepts and evolve our thinking on things. At the same time, we’re not defined by what we consume. It’s about not being so interested in how people label themselves or what products or aesthetics they use to define themselves with. It’s really about what they’re doing and what issues they’re fired up about and what they’re interested in working toward and fighting for.

Cindy Widner is the editor of Curbed Austin and a freelance writer and editor.