In Thin, and I, Andrijka Keller Recounts Her Battles with Eating Disorders, Overmedication, and Nasty Denizens of the Modeling World 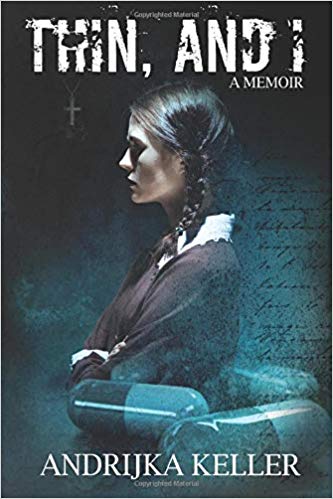 For teenage girls suffering from anorexia or bulimia, an eating disorder is a secret source of shame and a threat to their mental and physical health. In her caustic, funny, imaginative memoir, Thin, and I, Andrijka Keller’s adolescent bulimia was all those things—but she also saw it as her best friend.

“My eating disorder always felt like a seduction,” says Keller, a former model who’s currently working as a paralegal in Philadelphia and pursuing a master’s degree in clinical psychological counseling. “I thought it would be interesting to depict it as a handsome, sexy man giving you all the promises in the world.”

Thus was born Thin, and I’s “ED,” a businessman with “a strong jaw and expensive suit” who accompanies Keller everywhere, coaxing her to diet and purge her way to impossible skinniness. His suave promptings—“ED loosened his tie and sat back in his chair, making himself comfortable. ‘You’re not planning on getting rid of me, right? I’ve done too much for you’ ”—are an apt metaphor for the disorder’s grip on Keller’s young mind and a striking injection of humor and color into an often grim subgenre of memoir.

Keller discussed ED during a lunch break after polishing off a salad and a masala dish. Enjoying a healthy meal like that would have been unthinkable back in 2008 when, as a sophomore in high school, she landed in a Philadelphia rehab center for eating disorders. Orderlies watched her and the other girls like hawks to see that they finished their meals and guarded them during bathroom breaks to forestall vomiting. An illicit trade in laxatives also sprang up.

Keller’s vivid re-creation of that Alcatraz-ian drama is the centerpiece of Thin, and I’s yearslong narrative of food issues and the cultural forces that foster them. The odyssey began in elementary school. “I was bullied for being fat,” she recalls. “The TV shows I watched had thin, pretty preteens, with the ‘fat’ characters serving as a sloppy punchline. When I discovered fashion magazines, it was clear that thinness was the paramount feature in a ‘beautiful’ girl.”

Starvation dieting pared her 5-foot-9-inch frame to 135 pounds as she began high school. By that time, the eating-disorders subculture in online chat rooms had taught Keller the mechanics of bulimia. “I would eat and feel heavy and guilty and have an anxiety attack: I have to get rid of this food!” she says. “So I looked up how to purge—everything from shoving your finger down your throat to drinking salt water. One girl told me about Ipecac, which I shoplifted.”

Her first purge was scary, but it also felt “amazing,” as Keller remembers it. “Such a relief. You feel much lighter. I got to enjoy my food, and I didn’t have to keep it! And if you vomit constantly, your brain gets a rush from it, almost a high. It’s a control thing: Being able to control what I looked like was an early onset of independence and rebellion.”

Much of Thin, and I chronicles the growth of that rebellious streak after Keller left rehab and her psychiatrist put her on a heavy regimen of antidepressants, anti-anxiety medication, and sleeping pills to help suppress relapses into bulimia. She hated the drugs, which made her feel emotionless and numb, and began selling them to classmates, along with amateur counseling services. “The fact that I was in a rehabilitation center was enough to give me the credentials that I needed to become a doctor in their eyes. I was excited that I was needed, that I was helping others,” she writes. “I wasn’t a drug dealer, no. I was listening to their problems and suggested what I thought was best.”

She blames the medication for a suicide attempt in her senior year, when she says “[her] brain chemistry wasn’t able to function properly” because of erratic drug dosings. Thin, and I is thus, in part, a furious, sardonic critique of excessive psychiatric drug therapy.“Absofuckinglutely, psychiatry went overboard with the meds,” Keller says. “No teenager should be that heavily sedated….I had to discover my own way of rehabilitation. Once I made the decision that I wanted to stop, I began to take the necessary steps to self-heal.”

Thin, and I ends in the early 2010s with Keller finding work as a fashion model in New York City—society’s ultimate affirmation of a woman’s beauty. Still, she tells of brutal fat-shaming of her and other very skinny people in the industry. Keller had built up some immunity thanks to her previous struggles: “What could those casting directors say to me,” she sighs now, “that I hadn’t already heard?”

Keller has been writing since the age of 10, when her first short story won a competition for a local library. “My teachers always told me that my writing was too conversational and vulgar and blunt,” she recalls. Heightening the unorthodoxy of her prose, she wrote the first draft of Thin, and I on a train during an Adderall binge, she says.

The book has kept the wired energy and attitude of its inception while adding a deep and subtle literary sensibility. It was rejected more than 100 times by various editors, publishers, and agents, she says, but it promptly found an enthusiastic readership when it finally appeared. Kirkus Reviews hails it as “Funny, frank, and visceral,” while Readers’ Favorite, which gave it an Honorable Mention in its Readers’ Favorite Awards, called it “eloquent and moving.” It’s a story of a young woman who, through pain, pratfalls, and occasional grace, comes to understand herself in the midst of a mad compulsion:

I sat on my bathroom floor and stared bleakly at my hands, realizing what they had done over the past few years. They stopped putting food in my mouth. They shoved their fingers down my throat. They put pills into my body. They put pills into the bodies of my peers. They threw punches at other people. They pushed people away. They held on tight.

For her next book, Keller is mulling over a murder mystery. “I love reading a good Gillian Flynn [novel], so I want to try that,” she chuckles. But her main project will be starting a counseling practice, focusing not on medication but on exercise, healthy living, and talking things through. “I want to help people, but my way,” she says. “The big message in Thin, and I is that there is no magic medicine that’s going to make you a better person. You have to cure yourself.”