Author Arlene Mcfarlane Discusses the Growing Success of Her Zany Mystery Series, a Combination of Romance, Thriller, and Slapstick Comedy 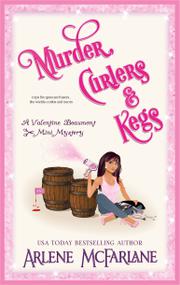 The nomination was unexpected. The voice actors behind the audiobook, Noah Michael Levine and Erin deWard, had such a good time recording it, they took it upon themselves to submit the project for special recognition. “It was a real break from the type of audiobooks they usually do,” says McFarlane of her actors.

At first, McFarlane, a former stylist who used to run a salon of her own, thought the Audie Awards were a small event for audio industry professionals only. Even when she found out the book was a finalist at the 2019 awards ceremony, she didn’t really consider making the trip from Canada, where she lives with her family. Eventually she figured out that SOVAS is a big deal, and attending the Audie Awards would put her in the company of people like Tom Hanks, Kristen Wiig, Gerard Butler, and Joan Cusack. McFarlane, a fan of the big screen, jumped at the chance to rub elbows with Hollywood stars.

“That’s every writer’s dream, to have their book turn into a movie,” says McFarlane. Since the beginning of her writing career, she’s envisioned her books adapted to film. “Because [the books] have that slapstick humor and a lot of action, they’re perfect for the big screen.”

McFarlane sees her series as a combination of Miss Congeniality and My Big Fat Greek Wedding. Although only Miss Congeniality has the trappings of a mystery, both are out-and-out comedies, which is exactly what McFarlane hopes her books are, too. “I love humor,” she says. “I want these books to be laugh-out-loud funny.”

Like its predecessors, Murder, Curlers Kegs features Valentine Beaumont, who describes herself as “an unknown beautician of a mediocre salon” and the town’s “amateur beauty sleuth.” But there’s hardly anything anonymous or amateur about Valentine, who’s a standout personality, an expert banterer, and an awfully engaging narrator. She may be a magnet for crime, but a little murder can’t quash her joie de vivre.

In the latest installment of the series, Valentine becomes embroiled in a murder mystery at a local bar: A bouncing keg bursts open, and, instead of spraying beer, it disgorges a curled-up corpse. Valentine takes it from there. With the help of her sidekick, Max, a good sport who keeps up with her verbal repartee—“If there were a Pulitzer Prize for excellence in being a smartass, Max would win the award hands down”—Valentine gets to the bottom of the keg crime, the mystery building to a satisfying showdown with an old nemesis.

Though she’s impulsive and often acts on instinct, Valentine is quite resourceful. Kirkus Reviews calls her a “feisty, pleasantly sarcastic heroine…who can turn just about anything in her bag of beauty supplies into an imaginative weapon.” A running gag in the series is the way in which Valentine manages to use the tools of her trade to her advantage. “Even if it’s just a bobby pin, it’s gotten her out of a locked room before,” says McFarlane.

As if comedy and mystery weren’t entertainment enough, McFarlane has given her series an ongoing romance as well. Valentine has plenty of chemistry with her principle love interest, hunky detective Michael Romero, but a fellow stylist named Jock also proves a worthy suitor. Still, Valentine seems keener on Romero. At the crime scene, she flirts with her favorite detective, recalling some of their intimate moments: “I felt a stirring down low, taking this as a subtle reminder of a couple of steamy nights several weeks ago, cuddling in a private cabana on the beach in the Bahamas.” Granted, she did some cuddling with Jock in the Caribbean as well.

More than any crime, this is Valentine’s most pressing quandary: Which beau to choose? If Valentine has a complaint about Romero, it’s that she wishes he’d get his priorities in order:

Sexy thoughts of Romero’s deft caresses and passionate kisses came to mind, kisses that revealed how hot-blooded and easily aroused he was. I wanted to turn back the clock to when we were in each other’s arms. No homicides to think about. No dreadful deliveries. I merely wanted to feel that hunger again. But with another murder case on Romero’s hands, who knew when I’d see him next?

But McFarlane says she wants to keep her mysteries decent. “Minimal swearing,” she jokes, “but some swearing. Some sexual tension. A few body parts are mentioned, but no graphic sex.” She says her books could traditionally be described as “cozies”—whodunits that downplay sex and violence or depict them in a more humorous fashion. The subgenre is a good fit for McFarlane, who recently found out Murder, Curlers Cruises, the third Valentine Beamount mystery, is a semifinalist for the 2019 Mystery Mayhem Book Awards for Cozy and Not So Cozy Mysteries.

McFarlane’s books are steeped in the tropes of mysteries. She mentions her reverence for Janet Evanovich, who writes in a similar mode of comedic mystery. “I do love to solve things,” says McFarlane, “to test the brain a little bit. There’s always an answer—a way to figure something out.” McFarlane says readers are looking for that, too, in a good mystery. They want that “little bit of satisfaction that they solved something before they shut off the lights,” she says.

As for what’s next for McFarlane and Valentine, there’s no slowing down. In fact, McFarlane is speeding up, writing faster than ever. “This latest book took me 10 months, from beginning to end. Considering I spent 10 years writing the first three books, it seemed so simple to write this one.” Still, she wishes she could complete them faster. “I wish I could write as fast as they [can] read,” she says of her fans. “It’s a wonderful thing that they love [the series] and are hungry for more. But it takes time.”