B.A. Blackwood Offers a YA Series about Warring Groups of Fallen Angels 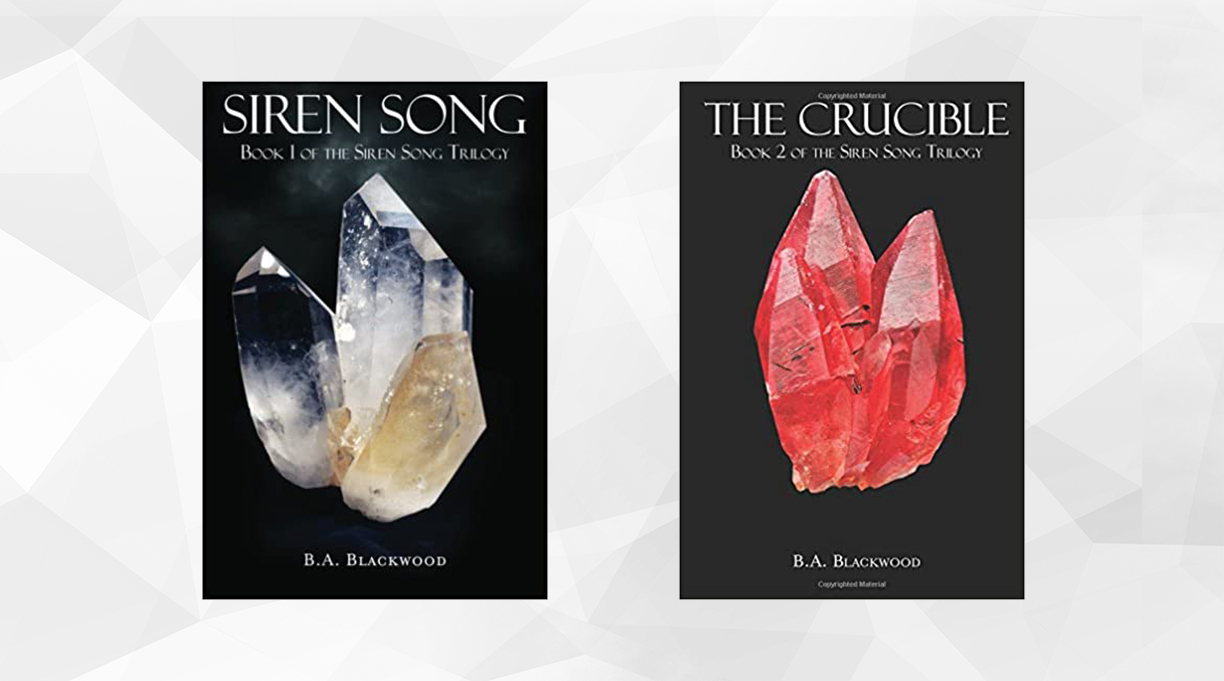 B.A. Blackwood’s Siren Song Trilogy began with an idea: “What would happen if professor Dumbledore had invited a student to Hogwarts who turned out to have not a drop of wizarding blood in him?” From here, she created a world of fallen angels at war. In their midst stands Ariel Robinson, a college freshman who possesses a mysterious crystal of devastating power.

“For me, a great story is not knowing what is going to happen,” remarks the author, a retired trial lawyer who divides her time between Dallas, Texas, and Bozeman, Montana. “I adore mysteries and thrillers. I just read The Silent Patient by Alex Michaelides—it kept me guessing the entire way. I try to do the same in the Siren Song books. I don’t want readers to know whom they can trust.”

Blackwood, the daughter of a Baptist preacher, was born in Kansas City, Missouri. When she was 7, her family relocated to Costa Rica, where her father became a missionary. It was here that she developed her love of mystery stories as an avid reader of the Nancy Drew and Hardy Boys series. She and her brother even set up a lending library, charging other missionary kids to read their books as a way of contributing to the cost of the family’s return to America.

Before she moved to Oklahoma, where she began high school, Blackwood’s teacher lent her The Hobbit. The expansive magical environment that J.R.R. Tolkien created in his writing had a significant impact on her: “It felt as though Tolkien himself lived in that world as a writer, and it’s a form of escapism to be able to enter it as a reader.”

Blackwood always loved writing but jokes that she “was driven to make a living,” so she decided to work toward becoming a doctor instead. In her senior year of college, she found that this career path didn’t suit her, so she decided to go to law school. She became a trial attorney, specializing in business litigation, and pursued that career for more than 20 years. As a lawyer, Blackwood particularly enjoyed writing briefs: “I loved making it interesting,” she says. “Legal stuff is generally very dry, [and] the challenge is trying to get the judge to be interested enough to read it. As with being an author, you have limited time to grab the reader’s attention.”

Blackwood went on to form a boutique law firm with her husband before attempting to retire three times (“It’s like the Mafia; you get sucked back in,” she jokes). During her first stab at retirement, she wrote the first book in the trilogy, Siren Song, which Kirkus Reviews describes as offering “an intriguing premise navigated by an affable heroine.” The Bozeman-based protagonist, Ariel, is stalked by the Enemy—fallen angels who remain loyal to Satan. She’s protected by Michael, who’s a Descendant, a half-human child of an Exile (a fallen angel on the side of good). Ariel discovers that she unwittingly possesses a crystal called a “Piece of Home,” which the Enemy craves.

The second book in the trilogy, The Crucible, was published in 2018 and was hailed by Kirkus Reviews as “a breezy, winsome fantasy sequel populated by a delightful batch of characters.” It finds Ariel in a romantic relationship with Michael, who’s become the “Leader of the Descendants for the Northern Hemisphere.” The pursuit of the Piece of Home continues, interwoven with a story of a murder trial involving Lucian Castlewhite, a lawyer whom Blackwood introduced in the previous novel.

The author’s life experiences percolate through her narratives. Growing up as the daughter of a preacher exposed her to stories of angels and concepts of good and evil, and she notes how she, like Ariel in the world of the Exiles, felt like a “fish out of water” when she was young: “Returning to the U.S. from Costa Rica, I felt behind culturally,” she says. “I was pretty sheltered as a missionary kid. Coming back, the world sped up.”

The character of Lucian Castlewhite gave her an opportunity to draw on countless anecdotes from her time spent as a litigator. “People are fascinating,” she muses, alluding to the “fantastic and sometimes downright hilarious adult versions of ‘the dog ate my homework’ ” that she encountered. She shows her keen understanding of legal jousting in this extract from The Crucible, which depicts the aftermath of a prank by Lucian’s client, Will, which involved superglue and some public officials’ chairs:

Under severe political pressure, the prosecutor had thrown the book at Will, jacking up what should have been a simple misdemeanor, if that, to a class C felony—aggravated criminal mischief—claiming that the property damage to the chairs from the superglue provided the basis for the enhanced charge. Lucian had successfully argued that the only aggravation at play was one prominent Council member’s pique at having those present learn that he didn’t wear underwear and that his cottage cheese backside revealed a fact everyone already knew—that he didn’t exercise or follow a sensible diet.

Blackwood’s language is smart, concise, and deceptively formal, which allows her to ambush the reader with her mischievous wit. Her work is compelling because readers never know what to expect—a feeling reflected in her writing process: “In legal practice I know where I’m going. I’m a planner,” she says. “With writing, I discover the story as I’m typing.”

She gets inspiration from her marathon training in the Montana wilderness, where she often runs up to 50 miles per week. “When the snow has fallen and it dampens the sound, it’s fun and a little scary,” she says. “It feels like there is mystery all around you.” She does her actual writing in an unconventional location: a parked car. Blackwood’s husband suffers from progressive supranuclear palsy, and her routine is to write in the parking lot while he receives therapy: “It makes you focus,” she says. “You have a finite amount of time.”

Kirkus said that The Crucible’s “smashing cliffhanger” ending would “surely leave readers impatiently awaiting Book 3.” Blackwood says assuredly, “I’m on it. And I have a decent idea where it’s going.” She also says that she’s “considering a spinoff series featuring Lucian Castlewhite and maybe a book on running and caregiving.” Her original trilogy, however, remains “interesting to me,” she says, “because it’s a way of exploring free will and the poignant fact that bad things happen to good people. That’s the bottom line with those books. And it’s an aspect of life that many people, including myself, are still trying to figure out.”

Darren Richard Carlaw is a British writer and editor and the founder of StepAway Magazine.