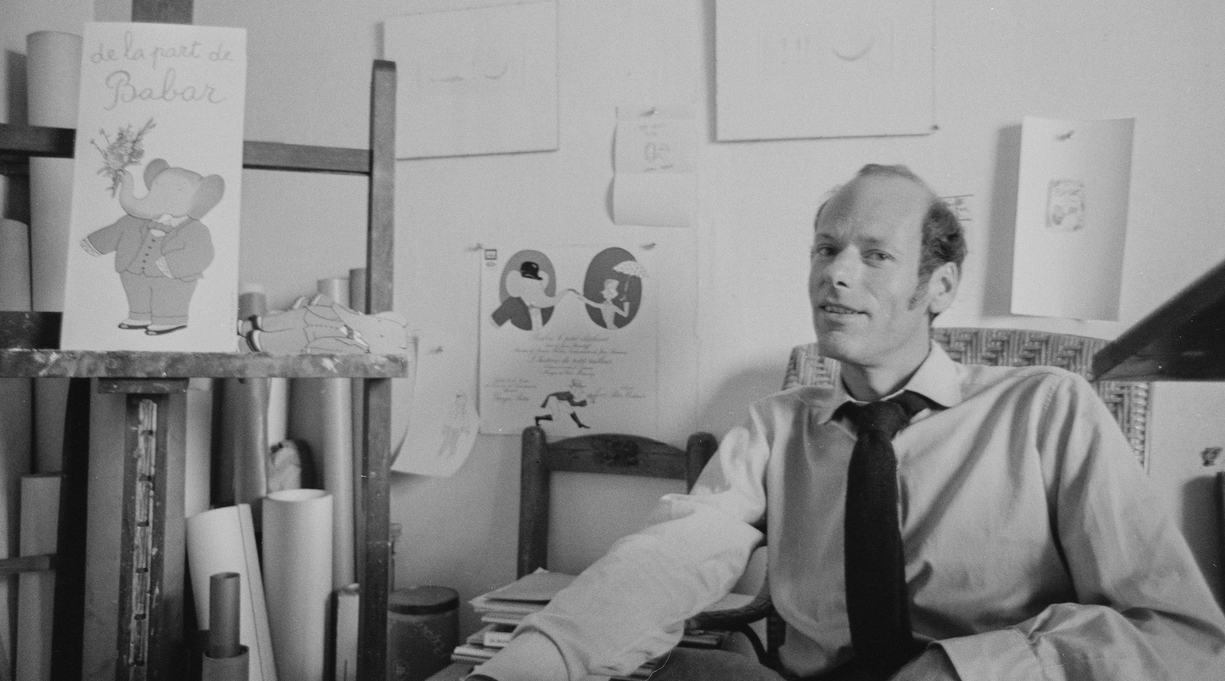 Laurent de Brunhoff, who took over the Babar books from his father, Jean, in 1969. Photo by Malcolm Winton/Radio Times via Getty Images

A young elephant lives in a forest paradise, all palm trees, ponds, and low hills. Then, suddenly, a White hunter fires a shot, and the young elephant’s mother falls dead. Babar flees, the hunter in pursuit.

Babar soon finds himself in a city that looks very much like Paris. He’s welcome there, with one proviso: like Adam after the Fall, he must clothe his nakedness. Fortunately, help is at hand: “A very rich Old Lady who has always been fond of little elephants understands right away that he is longing for a fine suit.” Presto: A couple of pages later, Babar has entered a fancy department store, where he purchases a Kelly green suit, a derby, “and also shoes with spats.”

It’s a very fin-de-siècle look, one that Jean de Brunhoff evoked from his own childhood while spinning bedtime stories of Babar the Elephant for his young sons in the Jazz Age. The boys were so enamored of the stories—an origin story shared by such classic works as The Wind in the Willows and the Winnie-the-Pooh series—that they clamored for more, asking their father, a fine artist, to create illustrations for them. De Brunhoff sketched out pieces that might have been by Poussin, but he instead chose a faux naïf style for the finished drawings, always with something going on in the distance: an airplane crossing the sky, the Milky Way glittering in the dark night.

De Brunhoff took his work to a publisher, and The Story of Babar appeared in 1931. Five installments followed, with Babar returning to his beloved forest to become a benevolent dictator over an animal kingdom in which the lambs truly do lie down with the lions. Granted, a war breaks out with the rhinoceroses, who reject the benefits of Babar-ian civilization, but peace is quickly restored.

Jean de Brunhoff died of tuberculosis in the fall of 1937, not long before a much more serious war engulfed his native France. One of his sons, Laurent, resumed the series not long after the war ended, and new titles continued to appear into the 21st century, charming generations of children. The Babar books remain in print to this day, standards of children’s literature.

They have not been without their critics. The leftist Argentinian writer Ariel Dorfman has seen in them all the hallmarks of French colonialism, and certainly there’s a lot of implied mission civilisatrice in de Brunhoff’s pages. Other critics, conversely, have found an anti-colonial impulse: The elephant and not the hunter rules, after all.

And then there’s the matter of death, a touchy, traumatizing subject. The death of the mother, animal or human, often violent, is a trope of children’s literature in which, literary scholar Maria Tatar writes, “beauty is often shadowed by the primal, unforgiving horror of evil and beastliness.” Indeed, but the beasts are not the perpetrators of that horror, a lesson that resounds 90 years later, when it seems that there are more elephants in books than in the wild, and the whole world is dying.