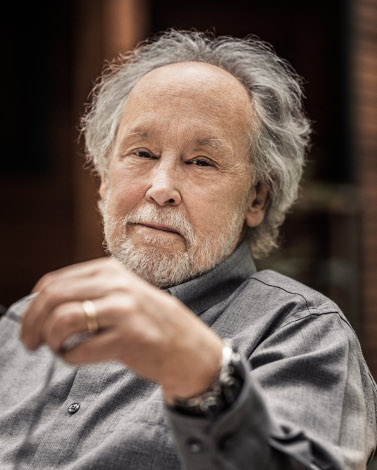 For as long as he can remember, the writer and naturalist Barry Lopez has been on the move, traveling between coasts and continents in his early years, spending much of his 30s criss-crossing the Far North to do the research that would culminate in his award-winning book Arctic Dreams (1986), always heading out the door on the way to somewhere else. An aficionado of flight who had early ambitions to be an aeronautical engineer, he once traversed the world several times over to pursue an essay on how airborne cargo moves, staying with one plane, as he says from his home in central Oregon, “126,000 nautical miles of its unending effort to contract space.”

There’s scarcely a place, it seems, that Lopez hasn’t spent time wandering in, studying, thinking about. Yet his new memoir, Horizon, opens with a moment in which he is quietly in one place, alongside a swimming pool with a view of the ocean, his grandson nearby. In that inaugural passage, he applauds the movements of others—particularly the graceful dive of a Japanese tourist—while contemplating just what it is that he should tell that grandson about the world. The boy has just seen the memorial to the fallen of the USS Arizona at Pearl Harbor, a possible opening to a conversation that might include such things as Gettysburg, Stalingrad, Nagasaki, and other sites where humans have done the unspeakable in the name of ideology, ambition, or greed. In the end, Lopez decides that those things can wait for another day, though he closes his brief preface on a dark note: “I want everyone here to survive what is coming.”

Something is always coming, from “foaming ocean surf [that] has arrived on the beach from someplace else” to a mamba snake that comes crashing toward Lopez in an African wadi: “You do not want to reduce the memory they represent with terse or restrictive language,” he writes of such things, “for fear that their ineffable essence will then slip away from you.” No dangers there: Over many decades and many books, Lopez has long been a master of what ethnographers call “thick description," layering meaningful details into wonderful tapestries of language, memory, and natural observation, introducing his readers to places that few people know—and sometimes that few people would care to know, as when he recalls an Arctic wind that doesn’t buffet so much as beat and batter, and that threatens to tear away the sturdy but perhaps not quite sturdy enough tent that makes for his only shelter out on the ice.

Lopez is now in his mid–70s, traveling less than before but still ever curious about what’s out there. And Horizon has been building for a long time, since not long after Arctic Dreams was published. He began then to plan a book blending life and travel, philosophy and observation, and his broad knowledge across a number of disciplines, but things happened: Life intervened, other books interrupted, and in the end, he says, “what slowed me down was that the book was autobiographical, and I hadn’t finished living.” He decided to let the book take its own flow, evolving with time and his own interests. “I wanted to write about places, and in that my idea for the book’s narrative structure never really changed,” he tells Kirkus. “But I also wanted to write about my life, as someone who’s lived with and in words for 50 years. I wanted to see if there was any maturation, or if was just one thing after another: Did I learn anything?”

What he learned, Lopez relates, is foretold by the book’s pensive opening there at poolside in Hawaii, his grandson swimming happily nearby. “I wanted to signal something,” he says, “and that is that this book is not a book of adventures as such but a book of ideas about life.” It is also a book, he adds, “about how dangerous life is,” and thus Horizon’s rather ominous opening. This is, after all, a time of political disharmony, cultural and ideological clashes, and a changing climate regime that may throw the world off balance just enough that things are going to be very difficult in the near future.

If the possibilities hold true, then all of us will want to think about how to survive what’s coming. But over all those decades of travel, reflection, and writing, Lopez remains hopeful. “We are on some very disturbing edges,” he says, “but I hold hope that the story will change. And I’ve learned one thing over the years of talking with and listening to people in the places I’ve traveled: The story itself is the wisdom.”