Behind the Wall in ‘Stasiland’ 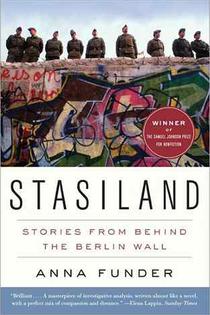 Stasiland: Stories from Behind the Berlin Wall is a document of a city in flux. After the fall of the wall, the East and West found itself intermingling, sometimes unwillingly, in a city that had to transform itself structurally and demographically very quickly. Australian journalist Anna Funder found herself drawn to these places of tension.

Read other new and notable nonfiction titles new for October.

In Stasiland we meet a former propagandist for the East, who told its populace that everything was fine even as the economy was collapsing. We meet a woman searching for information about her boyfriend who went missing in Stasi custody. We learn of a man whose wife was a Stasi plant, sent to infiltrate his home through romance and then marriage and report back to the government. And then there are the men and women who preferred life under communist rule.

When Stasiland was released in the UK in 2003, it was an instant hit and won the prestigious Samuel Johnson prize for nonfiction. Even so it somehow never found an American release. Until now. Stasiland will be swiftly followed by Funder’s second book, the novel All That I Am, also set in Germany.

Funder and I discussed her attraction to Germany and Berlin, what it was like to interview former Stasi, and the newfound relevance of an 8-year-old book.

First, just a quick note to say I'm happy your book is finally seeing an American release so many years after its original UK publication. Is it odd to be doing press for something you wrote so long ago?

It's not really odd—it's kind of nice actually. After the Samuel Johnson Prize the publicity for Stasiland seemed to go on for a long time, and the book came out in many countries over the following years, so I was always touring and talking about it somewhere. Also it went onto college courses in creative writing, or history or European studies around the English-speaking world, and is on the school syllabus in Australia, so there were always great, fresh discussions to be had with students.

I think too that the issues of individual conscience and courage and, on the other side, the way power will always seek to wipe out dissent are universal and eternal. These things continue to fascinate me for what they reveal about human nature, and I see them recur in all sorts of other contexts—whistleblowers, firefighters, freedom fighters in Burma or Libya or China. Also, I’m very fond of some of the people in Stasiland, so am happy to keep talking about the lives they had, and how it has panned out for them in the post-communist world.

Tell me a little how the Stasiland project came about. What drew you to Berlin in the first place, and what made you start to delve into this post-communist world?

I studied at the Free University in Berlin in the late ’80s. Because I grew up during the Cold War Berlin was a fascinating place that embodied the split between the West and the Communist World. The Western part of the city had a wall around it—beyond that wall it was not clear what life was like in a country that was allegedly more equal and less exploitative of people.

In West Berlin I met some people, mostly artists and writers, who had been expelled from East Germany. When we’d sit in a café in Kreuzberg, at the end of the street there’d be the Wall, and over it were these people’s families, friends, their whole past. I wondered what kind of country would kick out its best and brightest?

After the Wall fell it was possible to explore what had happened over there. I was particularly interested in the truly extraordinary stories of individual conscience and courage I came across, in so-called ordinary people: a schoolgirl who tried to scale the Wall, a dental nurse who refused to betray someone at great cost, a louche alcoholic rock star who was declared to his face to “no longer exist” and then kicked out.

It’s hard to imagine a place where anyone you know could be spying on you and reporting back to the government, and then the courage it must have taken to buck that system. I think all good books come out of a great, if oddly expressed love of some kind. I was in love with Berlin.

You were meeting former Stasi agents at the same time you were meeting people you cared about who had been oppressed by these men. Was achieving some sort of emotional distance, or at least not losing your temper while they told their stories?

I think in my interview with the regime’s TV propagandist Karl Eduard von Schnitzler I might have come close! But I actually wasn’t angry with them. It was more that I wanted to explore what it is like to believe in something as fervently as people believe in religion—in this case communism—and then have that world around you cease to exist. What I found was that these men, and they were all men, simply kept the faith: they continued to assert that communism was a better system, and though it had disintegrated for the moment, it would win out in the end. One of them shouted at me, “You mark my words young lady, the end of capitalism is coming!” That seemed ridiculous in the ’90s, but somehow now, after the global financial crisis where we saw public money being used to bail out banks, it gives me pause for thought.

I think more fundamentally, it is extremely difficult to believe passionately in something and build your life around it and then have that founding belief disappear. It may even be barely possible. It seems to me like we make backbones for ourselves of our beliefs—for good or ill—and that without them we’d risk psychological collapse.

You have returned to Germany for your novel. What is it about German history that you find so compelling? And why return to the topic in fiction this time?

I really didn’t mean to go back to Germany. It’s like in The Godfather, “They pull you back in!” I am interested in Germany because I studied German to honors level, I lived there and speak the language.

But these books are only really on the surface about Germany—if I’d studied Mandarin, I could have written both of them set in 20th-century China. It’s the conscience and courage of people resisting the Goliath of an illegitimate state that really interests me.

Of course, in All That I Am, because it’s a novel, I get to write more viscerally about love and desire and mistaken love and desire, which interest me hugely, too, and have nothing to do with Germany.

Berlin is so very trendy at the moment. [Hello from Berlin, by the way.] And one side effect of that is that it is changing very rapidly. Have you been back to Berlin much? And does it feel like a different city to you?

It has changed a lot from the late ’80s through the ’90s when all of a sudden the two parts of the city—a glitzy western half and a derelict eastern half got back together. Then it changed again, when the public servants moved up from Bonn and into the newly renovated Eastern areas.

It is still a beautiful city surrounded by lakes, with great art and literature and food. I love to be there, because it is a place on earth that puts cultural life in the center of life, rather than economics. I’d be back in a flash.

Jessa Crispin is the founder and editor-in-chief of Bookslut.