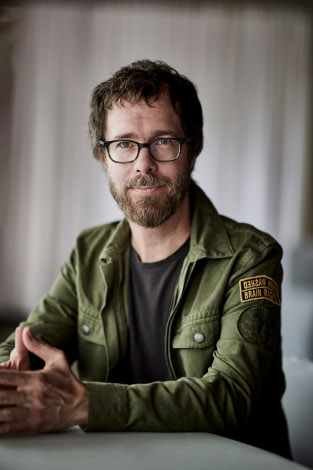 “I didn’t have to be a musician.” So says the popular pianist, songwriter, and bandleader Ben Folds, talking to me from his home in Nashville. In fact, as he recalls, he was once so torn about his future that when his father asked him about college plans, Folds answered that he was thinking about joining the military. His father responded, “You’re fucking high.”

It’s a marvelous, funny anecdote that figures in Folds’ song “Army,” from his third album, The Unauthorized Biography of Reinhold Messner, released in 1999. He recasts it at more leisure in his new memoir, A Dream About Lightning Bugs, a book steeped in his North Carolina boyhood and teendom, with plenty of humorous anecdotes and ribald wisdom, as when he writes, “It’s one thing to work shit jobs in high school, when there’s a theoretical life ahead. It’s another to realize the shitty job is your life.”

Folds allows that his life has been a bit more fortunate than most, and he’s an altogether thoughtful fellow who recounts his long musical education throughout the pages of his book. “I wanted to know if Gene Simmons ever went to band camp,” he says of one centrally important experience in his teenage life. “Where did he learn how to make a G chord?” Band camp was a nerdy sort of place, to be sure, but it was also where Folds began to explore the subtle blend of jazz, pop, and rock that characterizes his work. Granted, he recalls, the cool kids there were “a little mean to me,” but he takes quiet revenge by imagining that they’re playing in cocktail bars somewhere now, earning their keep with—well, the kind of job he described earlier.

As for Folds, he’s got a busy touring schedule ahead, promoting his book as if it were another album, playing concerts, and doing interviews around the country. “Overall,” he says, “I’m pretty pleased with the balancing act. I’m caught up now in picking out things from the book to read from and talk about—sort of like having to pick my singles when a new real album is out. I’m picking my singles and getting ready to go out on the road.”

“Yes, I could have been a lot of things besides being a musician, but I’ve always been a writer,” the 53-year-old Folds says. “I write songs, of course, but I’ve also written stories, all kinds of things. I thought maybe I was a little too young to write a memoir, but then I realized how old I am and decided I might have something to say. For one thing, I want to give some honest encouragement to people who are interested in music and creative work, to urge them to pursue it while they’re selling insurance and whatnot during the day. But I also wanted to curate my own life a little bit, look back and figure out what’s been important. I decided not to pass up the chance.”

He adds, laughing, “Still, I just recorded the audiobook, and there were moments when I thought, like when you stick a dog’s nose in an accident, ‘Look what you’ve done!’ ” Readers and music fans alike will find what he’s done to be a treat.

“Wichita Lineman” by Jimmy Webb. “It starts off ordinary, about an ordinary life. Then comes that ‘I need you more than want you’ line, and it gets me every time.”

“Marie” by Randy Newman. “Nobody tells a story better, and always with a twist.”

“Common People” by Pulp. “I had William Shatner sing it. Great.”

Exile in Guyville by Liz Phair. “That whole album inspires me.”

“The Last Time I Saw Richard” by Joni Mitchell. “Essential. But how do you pick just one Joni Mitchell song?”