Best of 2021: Our Editor-in-Chief’s Favorite Reads 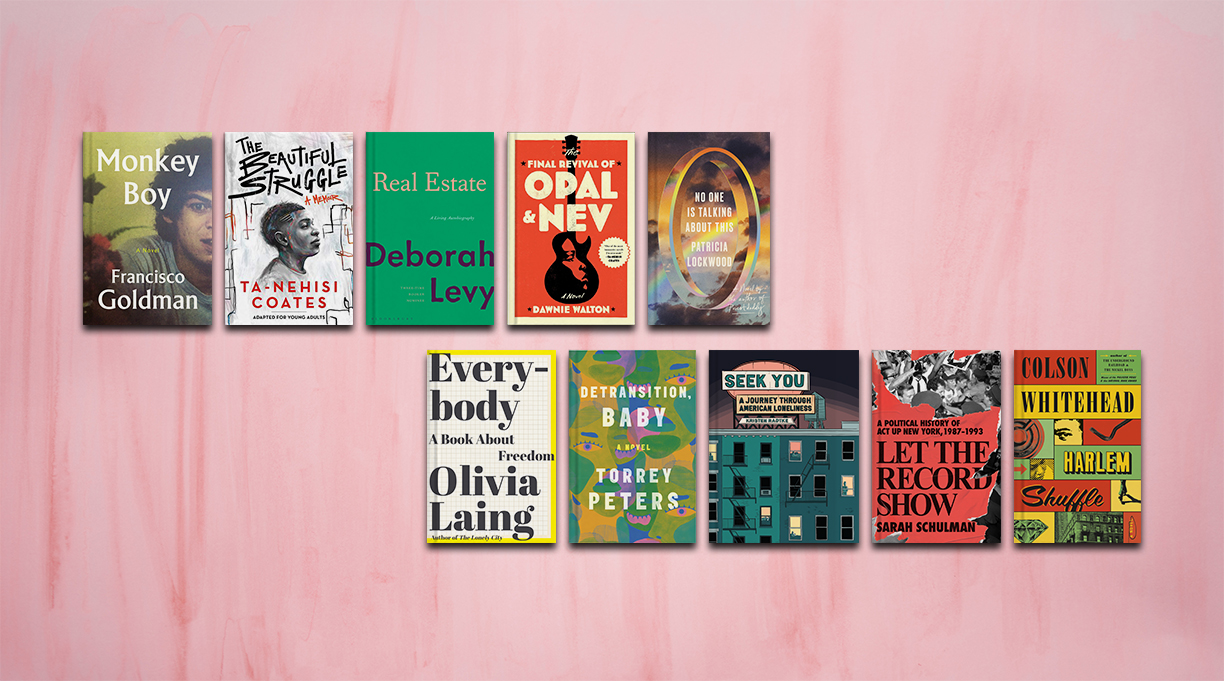 As Kirkus rolled out its Best Books of 2021 coverage, I took stock of my own reading during this topsy-turvy year, when books provided sorely needed entertainment, solace, and intellectual stimulation to so many of us. These 10 titles—five fiction, and five nonfiction (including one young adult book)—were some of the highlights for me.

Detransition, Baby by Torrey Peters (One World/Random House, Jan. 12): This debut novel of trans life by an extravagantly gifted trans writer is a complete original. Its three central characters—a trans woman, her trans ex-girlfriend who has “detransitioned” (presenting as male again), and the cis woman who is bearing his child—are psychologically complex and wholly believable.

The Beautiful Struggle (Adapted for Young Adults) by Ta-Nehisi Coates (Delacorte, Jan. 12): I’d surely have listed Coates’ memoir among my favorites of 2008 had I read it when it was first published. Instead, I discovered it this year through a young readers’ edition that is stripped down and economical without sacrificing Coates’ urgent voice. A vital account of growing up a young, Black, and male in 1980s Baltimore, it will be read by teens and adults, in both editions, for years to come.

No One Is Talking About This by Patricia Lockwood (Riverhead, Feb. 16): This debut novel by the poet and memoirist (Priestdaddy) is both uproariously funny and profoundly moving, as a young woman becomes Internet famous for creating a viral meme and then finds that a real-life family tragedy reframes everything she thought she knew about life. Written in two tonally distinct sections, this book is startling and unforgettable.

The Final Revival of Opal and Nev by Dawnie Walton (37 Ink/Simon and Schuster, March 30): Another debut I could not put down, this novel is presented as the fictional oral history of the titular ’70s rock duo, an African American woman and a White British man whose creative partnership takes off and then founders after their Black drummer is killed by a racist mob at a show gone terribly wrong.

Monkey Boy by Francisco Goldman (Grove, May 4): The latest autobiographical novel from Goldman (The Long Night of White Chickens, Say Her Name) introduces readers to Frankie Goldberg, whose trip to Massachusetts to visit his Guatemalan-born mother in a nursing home occasions a flood of memories of his youth, especially the violence he endured at the hands of his immigrant Jewish father and the racism directed at him by his peers in suburban Boston. Goldman’s voice and storytelling powers have never been more insinuating or powerful.

Everybody: A Book About Freedom, by Olivia Laing (Norton, May 4): One of our great cultural critics considers human bodies and the meanings of freedom, all filtered through the life and work of psychoanalyst Wilhelm Reich—a discredited disciple of Freud whose ideas nevertheless have much to offer us. Considerations of Susan Sontag, Andrea Dworkin, the Marquis de Sade, Agnes Martin, Nina Simone, and others round out this limber intellectual pursuit.

Let the Record Show: A Political History of ACT UP New York, 1987-1993 by Sarah Schulman (Farrar, Straus and Giroux, May 18): This account of the groundbreaking AIDs activist group—drawn from two decades of interviews with participants—will be studied by historians and organizers alike. For me it was somewhat more personal; I was an ACT UP member from 1991 to 1994, and I found the book captured the heartbreak and activist inspiration of those dark years before effective HIV treatments arrived.

Seek You: A Journey Through American Loneliness by Kristen Radtke (Pantheon, July 6): Part memoir and part essay, with gorgeous illustrations by the author, Seek You was a soulful and smart consideration of loneliness in American life. Emerging in the second year of the pandemic—though written before it—it could not have been timelier or more resonant.

Real Estate: A Living Autobiography by Deborah Levy (Bloomsbury, Aug. 24): A companion to Levy’s earlier autobiographical volumes (Things I Don’t Want To Know and The Cost of Living), the novelist here takes stock of her life as she turns 60—the divorced mother of adult children who finds herself coveting a more settled existence, even as she journeys to New York, Berlin, and Jaipur, India, to visit friends, family, and fellow writers. Levy is good company—wry, self-deprecating, and brimming with insights.

Harlem Shuffle by Colson Whitehead (Doubleday, Sept. 14): Call it heresy, but I may like this novel even better than the author’s Pulitzer Prize winners, The Underground Railroad and The Nickel Boys. An homage to midcentury crime fiction by writers like Chester Himes, it is structured around three episodes in which a Harlem furniture dealer is drawn into the criminal underworld. The novel is a showcase for Whitehead’s powers of characterization, scene-setting, and storytelling.