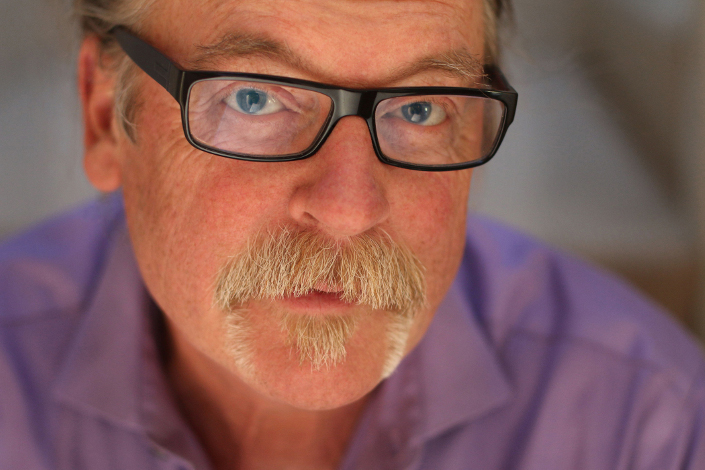 Bobby Mullendore, a sixth grader, has just committed the perfect crime: he’s excused himself, permanently, from school with a crafty stratagem, and now he’s on the loose, ready to enjoy a Huck Finn existence of wandering in the woods of a country estate. Alas, those woods hold other plans for him, for a man who “smelled of cologne” and “looked warmly stuffed—taxidermy in corduroy” intercepts the young boy and sets to work helping him change himself, and in so doing change the world.

But where are Bobby’s folks in all this? What are the older man’s motives? Is something creepy afoot?

Bill Roorbach, a much-published short-story writer and novelist, has a well-honed sense of the ways in which fiction can put the reader off guard and smash his or her expectations. His newest collection of stories, The Girl of the Lake, is a case in point, full of stories in which people sometimes do unexpected things in the face of some sudden challenge or change of fortunes—often learning something about themselves and the world along the way.

“Writing, for me, is the slowest form of reading,” Roorbach says, speaking from his home in New England. “I write in order to find out what’s going to happen in my stories. When I figure that out, then I can go back and fill in the gaps, polish things up. But I usually don’t know when I begin a story how it’s going to end up.”

The stories in The Girl of the Lake, including the title piece, redolent of the summery smells of bacon frying and cookies baking in a vacation cottage, are full of sudden moments in which everything changes: a first kiss is exchanged, a loved one dies, an aggrieved person finally tastes of sweet revenge. Some of them, including the portentously named “Tragedie of King Lear”—a personal favorite in this collection, Roorbach allows—manage to pack a Chekhovian novella, if not a Shakespearean bloodbath, into just a few pages. Others are smaller, more leisurely, but just as finely tuned.

“I like the capaciousness of novels,” says Roorbach, “and of longer stories, which, as Jim Harrison used to say, give me room to ramble. Longer stories even allow for longer sentences. But I also like to deliver whole stories in very compact narrative forms. I like to put two unlike people together, often acting on something I’ve actually seen in the world—anyway, that’s often how my stories start, and they take off from there. For me, it’s quite fun: what happens when I stuff those two unlike people together? In a story, this happens with fewer characters, usually, and in a smaller time frame than in novels.”

That said, though they tend to be sparsely populated, several of Roorbach’s tales rocket around in time, slingshotting from a moment in the past to reflections on such moments from many years in the future, as when a onetime Oxford exchange student marvels of a classmate, “He’d united three colonial states as tribal lands without borders, erased the names of three countries, disbanded three parliaments….And then, of course, he’d taken the title of king.” Roorbach singles out Alice Munro as a writer “whose every story is a compressed novel,” but in several of these pieces he emerges as a master of that very compression himself, squeezing decades into paragraphs without suffocating the narrative.

Novel or story, it’s a combination of sweat and magic that makes things happen. Roorbach pours plenty of both into his work. Expertly written, and with understated elegance, the stories in The Girl of the Lake capture odd moments in the lives of their actors—and a writer at the top of his game.