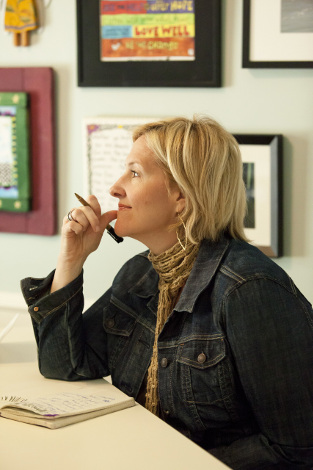 Remember that time you got so upset about something it hijacked your thoughts for hours or days? That’s what Brené Brown calls a facedown moment. Whether it’s a crushing event like discovering a partner’s infidelity or simply reacting to a snide remark someone made at the office, Brown says these emotional “shit-storms” are actually our first-class tickets to peace of mind—if we’re willing to reckon with them. But reckoning isn’t the go-to response for most of us.

“We tend to offload emotion instead of recognizing it and getting curious about it,” says Brown. “We get angry and then push it down. Instead of saying, 'God, those comments that this guy made really hurt my feelings,’ we tell ourselves, ‘I’m not going to say anything; I'm just not going to get into it.’ We stockpile [emotion]; we push it down, we blame, we avoid. I think there’s a line in the book—one that I think about all the time for myself—that it’s easier to inflict pain on other people through anger, blame or shaming, than it is to actually feel anger or pain ourselves.”

The book she’s referring to is her newest release, Rising Strong, which debuts on the heels of her No. 1 New York Times bestseller, Daring Greatly. Rising Strong builds upon Brown’s extensive research on shame and vulnerability, and introduces a three-part approach that’s designed to help tow us out of the emotional ditches we all too often find ourselves in. Reckoning is the first part of the process, which consists of acknowledging emotions and getting curious about how they’re influencing our lives. Next is the rumble, where we dare to get honest and vulnerable about our inner narratives. And finally, the revolution is where we’re able to write a new ending to our stories. Brown says that “act two”—the rumble—is the part most people would prefer to skip.

“As soon as we experience something that feels even the least bit emotionally threatening to us, our brain scrambles to create a narrative,” says Brown. “It recognizes the story structure of beginning, middle, and end, and helps us understand who's bad, who's good, what's safe, and what's unsafe. So immediately your brain goes to, ‘These are the bad people. Don't trust them, they're terrible.’ And the accuracy of that story is irrelevant to the brain.”

Brown believes that these inner narratives account for the majority of relational conflict, because quite often they’re more a reflection of our own bottled-up emotions rather than a true assessment of what’s really happening. During one of her own “shit storms,” Brown inadvertently stumbled upon what she calls one of her biggest life hacks. When seized by strong feelings like anger, fear, or shame, she stops, listens to what’s going on in her head, and then tells the other person, “Here’s the story I’m making up about this situation.” More often than not, she says, it diffuses a lot of intense emotions.

“It's just completely disarming,” says Brown. “I use this at work a lot, in leadership work with CEO's, and with organizational and academic leaders. And people are like, ‘Oh my god, this sentence has changed my whole classroom, or faculty or leadership team.’ But you know what I think is so revolutionary about it? It's just the truth.”

Determining who’s right and who’s wrong doesn’t appear to matter much in the Rising Strong economy. Contrary to the common impulse to place blame, Brown says the purpose of the “shit storm” isn’t to condemn or exonerate anyone; it’s a personal invitation to pay attention to what’s really going on within. But all too often we focus outward instead.

“In order for us to live wholehearted lives, we have to take huge emotional risks every day,” says Brown. “So right or wrong becomes less important, less imperative, and it’s more about truth, authenticity, vulnerability, and the willingness to show up, which is really hard.”

To be sure, Brown’s blueprint for wholehearted living isn’t for the faint of heart. She’s explicit about the fact that rumbling with emotion is sometimes painful and messy; she actually calls curiosity a “shit-starter.” So why would anyone deliberately want to stir stuff like that up?

“You can either stir it up and walk through it, or you can live in it,” says Brown. “And some of us get used to it. It becomes our habitat, our environment, our climate. Better to stir it up and walk out of it than to just stay in it. There's no other alternative.”

Laura Jenkins is a writer/photojournalist based in her hometown, Austin, Texas.