Brett Patton and His Mecha Universe 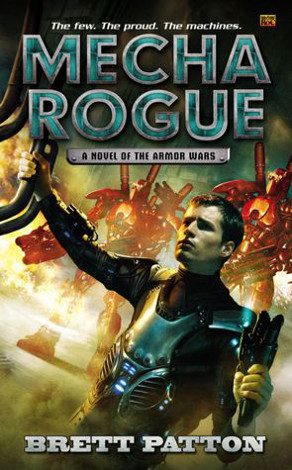 In Mecha Rogue: A Novel of the Armor Wars, sci-fi writer Brett Patton has an entire universe populated with intriguing characters and astonishing entities to toy with. So, is it any wonder that the veteran scribe says he's never been having more fun at the writer's desk? Here, Patton talks with Kirkus about balancing "serious" science-fiction with all-out Mecha-action, as well as where today's scientists might be getting all their wonderful toys.

Is the Mecha universe still evolving, or do you already know where it's all going to end?

Actually, it is evolving, rather than being completely planned out. Where the current book ended was a bit of a surprise. I didn't know that we would get so far into complete upset of where it was. We have a rough plan for the next book, and that should bring me into some new characters and some new dominions out there. But right now, I don't know that I have the ending completely in my mind yet.

This is your creation - how is it that you are able to surprise yourself?

It's funny. I usually do work with an outline - at least a preliminary outline. But I'll allow myself to deviate from that if it makes sense. Around the middle section, this book started wanting to go bigger and bigger. And so I allowed it to go a little bigger than I expected, and wound up uncovering one of those secrets that I wouldn't have anticipated. Overall, we've gone a little further than I expected, and it's actually kind of fun just playing in this universe because I'm discovering some of it, as I do it. I have the general history of what the universe is about. But we haven't really met any of these other interstellar government organizations yet.

Have you always been a fan of this kind of expansive storytelling?

I started out on the more literary science-fiction side. I was a finalist for the Theodore Sturgeon Memorial Award and had 30 stories published in various serious science fiction magazines. And when this opportunity came up, at first I thought, “Well, this is interesting. I understand that you want more accessible, mass market stuff.” But the challenge at that was, how could we actually make the universe not only interesting but fit together? I've done a lot of work on the science behind this. And yeah, it's all science fiction so it's all hand lathing. But it does fit together, and there is a logic to it. There are a lot of tactical implications to things, like their displacement drives and things like that to play with. I'm actually having more fun writing this more than my other book Winning Mars that I had out last year, which was more on the serious side. This is a heck of a lot more fun. It's more expansive and I am much more comfortable working with an extended universe than just doing stories now.

Many authors have used science fiction to comment on important contemporary issues. Is that part of your work as well?

Yes. And you see it in pretty much everyone's work. It's just what is the political slant? I try to be more independent or moderate. I'm definitely not a red state guy, but I'm not completely on the blue frequency either. I think the comment that I've been trying to make is of the Union being this great monolithic entity that seems to be for good. These guys are fighting the good fight and keeping everyone safe. Very much like the early American mythos of we are the one, perfect, etc. And, as we go down the road, more  and more is revealed about how much has been covered up. How much they've been hiding, how much their ulterior motives are not necessarily great. Still, they do have reasons for what they covered up. You can look at that as, well, they've done this for a good reason. They've done this to try to help people over all. But they've also lied, killed, etc. And it really starts coming out in this book to the point where there is a grand upset at the very end. So, I think it reflects our own coming of age here in the U.S. That we are a player on the world stage, but not necessarily the one and only, the perfect and the best forever.

Your work on the Mecha series is more action-oriented than your previous writings - how do you successfully balance science and adventure?

I really like people who are really pushing the limits of what you can do with sci-fi on the literary side, but I feel like there is an element that says, “If we have a little too much fun, then obviously we're not being being serious.” In this case, I feel I've been given the latitude to have some fun. So we have some fairly quirky, accessible characters. And we have a very fast-paced plot. But in the background there is actually a lot of stuff that makes serious sci-fi great. There's a very deep universe, there's a lot of tactical stuff that they have to deal with and the technology. There are a lot of discoveries that are being made along the way. And some dark stuff - like the addictive nature of the Mecha. I'm also having fun with the faster pace. And to be frank, the more accessible characters. A lot of the guys I'm writing about aren't into introspection or self-examination. They're just going out and doing things. And sometimes that can be fun. But it has to be balanced with some other characters. In general, writing this is more interesting than the stuff I've done in the past.

So much of what sci-fi writers throughout the years have envisioned has been realized - is sci-fi predicting the future, or is the future following sci-fi?

Actually, it's a little of both. I'm fortunate enough to be involved in a company that does marketing for very hi-tech products. One of the products we have marketed in the past is an atomic force microscope - sounds pretty science-fictiony. And, in fact, it is. A couple of years ago, their scientists were showing us their latest innovation, which allowed you to go in and grip molecules and pull them apart and unfold them. I looked at that and said, "Holy crap! This is exactly like Neal Stephenson's The Diamond Age." And not one - but all six scientists - turned around and said to me, "You read that?" I said, "Of course." They said, "That's where we got the idea from." So, I do think it reflects both ways.