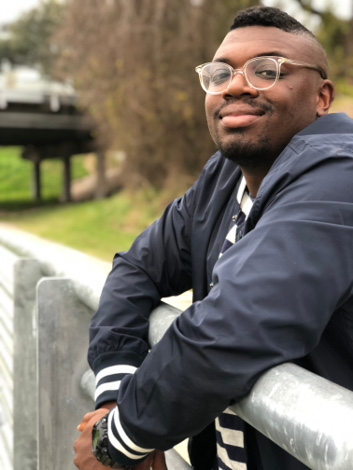 Bryan Washington grew up in Houston, in what he describes as about as much of a suburb as a suburb can get. It was him, his younger brother and his two parents. He didn’t grow up reading literary fiction; in fact, he says he read more cookbooks than novels. “Pragmatic” is a fair word to describe his parents: His dad works in computers and his mom in medicine. He recalls they had a lot of black holiday memorabilia, mostly black angels. You won’t find a black Santa. “We made a list, my parents worked, and if you were lucky you’d get some of the stuff on the list,” Washington says.

As a kid he played football, “but that’s not really significant,” he adds. “Have you been to Texas? Football is like a cloud here—no matter where you are it touches you. If you are a certain age, depending on what part of Texas you live in, even if you aren’t playing it, you can be deeply aware of football. When I was in high school it was a major concern of mine. Now I couldn’t tell you.”

You can’t talk to Washington without talking about Houston. “There really is no one narrative or one author or reporter here, no one economic or political thread that could capture the city and all of its messiness and its multiculturalism, and the expanse of its sprawl,” he says.

Washington’s debut story collection, Lot, aims to capture a specific experience of Houston, so while Houston is not named in the collection, neighborhoods are. Houston doesn’t have zoning laws. “There are skyrises beside wildly underfunded resources, and that makes for a lot of narrative possibility, so many people with such different experiences living in a space of transition,” he explains. “When you have mega-affluence a stone’s throw away from the city’s most vulnerable and deeply underfunded communities…” Then he pauses as if to make room for all that’s imaginable. “I wanted to capture that small intimate and unspoken space of folks moving toward more solid ground.”

In a story titled “Shepherd,” a young boy meets his cousin Gloria. Gloria is a mystery: beautiful, seductive, forbidden, riddled with scandal. She’d fled originally by way of Kingston, which she fled to Miami, which eventually brought her to her family in Houston, some time to get away, a chance to slow

Our narrator, Chris, seems at first enamored with Gloria, and then their relationship takes a slight turn. Chris is grappling with his own identity and in the frustration of growing up in a space of what felt like limited possibilities, he lashes out at Gloria. Gloria is mature, doesn’t take things personally, which gives the reader the impression that she has the upper hand. She eventually gives him a gift, a book where she inscribes something to him inside. The reader never learns exactly what was written. Just the detail keeps us captive. “Look, you’re probably not gonna tell me, but what did Gloria write in the book?” I asked Washington. “What do you think she wrote?” he asks.

This is a neat trick on Washington’s part: a Rorschach test of a story. Washington wrote drafts where he revealed the exchange between the two characters. And then he took it out. “What I ended up deciding was that it was more significant for that character to know that he’d been given a gift, and at the time he’d chosen to cast it aside,” he says. “He disregarded it and maybe it’s arguable that he wasn’t in a position to accept the gift. Then once he was ready for the gift or he wanted the gift, it was gone. Gloria gave him a part of herself and he wanted it, but then when he went in search of it later, he couldn’t find it.” It seems a question of appreciating what we have, when we have it—on faith, on acceptance.

Melissa Chadburn is a writer whose debut novel, A Tiny Upward Shove, is forthcoming from Farrar, Straus, & Giroux.