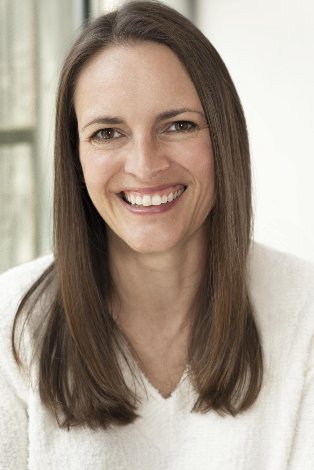 After working on her debut novel, The Dearly Beloved, on and off for the last 13 years, author Cara Wall is used to being met with skepticism when she explains its premise. Saying you’re writing a book about ministers will, at the very least, inspire some varied reactions, the most common being surprise followed by, “Huh, interesting. How’d you get to that?”

But to her, arriving at a story about two very different ministers preaching together at a church, much like the very one she grew up in, was far from odd. “When they came to me fully formed, it was very natural,” Wall recalls. Wall’s parents were both raised Nazarene and met in Oklahoma at a church picnic. After they married, they left their small town and moved to New York City, where her father studied law and her mother sang in the choir and worked as a receptionist at Greenwich Village’s First Presbyterian Church. At the church, there were two ministers who alternated days when they’d preach in the pulpit. It’s rare for two figures like this to coexist in one church, but at First Presbyterian it just worked, Wall explains.

While the ministers in Wall’s novel slightly resemble the ones she grew up with, they were more inspired by her own thoughts and convictions about faith, and how it manifests in a spiritual setting, as well as within the bounds of a relationship. Using these two men and their wives as the nexus of the novel gave Wall the freedom to “parcel” herself out and plumb the depths of her beliefs from various angles. In the winter of 1963, when Charles and James are asked to co-minster a congregation that’s endured what seems an insurmountable upheaval, they’re forced to work with one another, compromising their disparate preaching styles for the sake of saving the church and themselves.

The same goes for their wives, too, as their lives intersect. Lily and Nan couldn’t come from more opposite sides of the spectrum. An academic who was orphaned at 15, Lily doesn’t believe in God and yet she must reconcile her doubt with her role as a minister’s wife and its attendant social obligations. Conversely, Nan, a preacher’s daughter with an unswerving faith in God, wants nothing more than to flourish in the new community she’s inherited with James, but it doesn’t come easily. As improbable as their bonds may seem, these four characters come together against all odds.

“I think everyone was bracing for this sense that [the book] was going to be religious,” says Wall. “That there was going to be a minister talking about how to be a good Christian. That’s not what interests me.”

Evoking the austere, poetic works of Alice McDermott, Wall writes with a careful command of her prose as her characters’ spirituality expands and transforms in response to their own internal battles and those of the society they live in. It’s through compassion and empathy that they overcome the gulf dividing their worlds and actually bring about worthwhile change in their congregation. “Every right action begets another,” Wall writes. “Every extension of a hand forms a rope and then a ladder.” As much as this book is decidedly about faith, it’s more a raw, honest examination of the way we overcome our differences. Wall’s characters are in no way the perfect, wholesome archetypes one would expect from a novel with such virtuous ambitions. They’re flawed and at times selfish, but that’s what redeems them.

Just like the people of James’s and Charles’s church, Wall wasn’t “interested in the trappings of religion” when writing her novel. What she really aimed to get at was the “hard work that it takes to become truly empathetic.”

“We talk a lot about empathy now in a way that we weren’t when I started the book,” Wall says. “Sometimes we talk about it as you have to have empathy for people, without really talking about how hard that is—and how worth it it is. You can accept someone else without diminishing yourself. It’s not a sacrifice to accept somebody else.”

Stephanie Buschardt is a writer living in Brooklyn.