In this sponsored interview, the film legend remembers a life well-lived 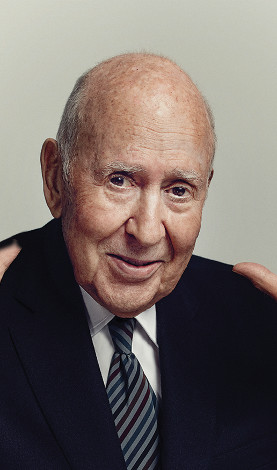 His Hedy Lamarr impression? Perfection. On the phone from his house in Beverly Hills, he recites, with precise diction, Queen Gertrude’s speech on the death of Ophelia, the first Shakespearean lines he learned as a student of English actress Mrs. Whitmore. And he vividly remembers his first time at the movies, in 1928, for a screening of Faust, starring Emil Jannings.

“My father and mother went to the movies once a week, and they couldn’t leave us home,” says Reiner, his parents’ second son, born March 20, 1922, in the Bronx. “My brother and I were small, so they took us, and that was a scary thing! I watched it through my fingers, I remember. [Faust] was a scary guy, and I do remember later on I learned that Emil Jannings was Hitler’s favorite actor, so I was right to be frightened by him.”

Love, not fear, is the driving force behind a pair of unique autobiographies charting Reiner’s rise from moviegoer to movie star, moviemaker, and the ultimate film aficionado: Alive at Ninety-Five: Recalling Movies I Love (1915-1950) and Approaching Ninety-Six: The Films I Love Viewing & Loved Doing (1951-2017). Each stately volume presents hundreds of the movies that helped shape his comedy, acting, directing, politics, and sense of justice.

“First of all, it’s the movies I remember seeing,” Reiner deadpans. “I had a look through what went on those years—I saw that, saw that, missed that, saw that—and what my favorites were.

“The comeuppance movies, to this day, are my favorites of all time,” he says, “and the best movie of all time is The Count of Monte Cristo. I never saw one as good....The uglier and nastier the villains are, the better I like it, and the comeuppance they get is such a pleasure to watch. As a matter of fact, I watched one yesterday—I must have seen it two or three times—The Net, with Sandra Bullock. It’s got that great comeuppance at the end.”

Beginning with Faust in Alive at Ninety-Five and ending with Ocean’s Eight, another Bullock flick, in Approaching Ninety-Six,Reiner presents a brief summary of each film followed by a full-page, full-color reproduction of its original poster. Opposing pages feature quotes from film critics (not all of whom he agrees with), stills from the movie, and his own analyses, fun facts, and anecdotes, like this story accompanying The Wizard of Oz:

I had the privilege of appearing with the star of The Wizard of Oz, Judy Garland, on her TV talk shows, Here’s Hollywood and The Judy Garland Show. On each show I reiterated how much I loved her when I was sixteen and how we were both the same age.

“Now we’re both thirty-seven,” she added, “and isn’t thirty-seven a shitty age? Thirty-eight is ok, it’s a round number and it’s close to forty, when they say “life begins.”

Yes, Judy actually did say, “sh--ty,” which made me love her all the more.

Approaching Ninety-Six gives readers a director’s-eye view of The Jerk and personal favorite Dead Men Don’t Wear Plaid as well as the inside scoop on the famous comedy sketch the “2000 Year Old Man” and dear friend Mel Brooks (History of the World, Part I, To Be or Not to Be, etc.) and actor/producer/director/son Rob Reiner (Spinal Tap, The Princess Bride, When Harry Met Sally, The Shawshank Redemption, etc.).

“It’s really a very personal thing that I’m telling things about what I love,” Reiner says. “[It’s] like sitting at the feet of an old man who says, ‘You should have seen, you should have seen...!’ Now they can see. I explain the movies well enough so [you might] say, ‘Oo! I’d like to see that!’—so that’s what I can do, remind people that there’s stuff out there that they might enjoy if they saw it. They’ll know immediately, when they see the components of these movies, the stars and the stories.”

Alive at Ninety-Five and Approaching Ninety-Six are available exclusively through Random Content Ink, a media management agency Reiner devised to help artists leave legacies through storytelling across platforms. When purchasing at Randomcontent.com, readers are invited to ask Reiner a question about the movies—or anything!—and he’ll respond when he signs the book.

“At their best, movies can truthfully tell the story of what is going on without directly commenting on it,” Reiner concludes. “By reflecting the mores of the day and how people are reacting to each other, they tell us who we are and what we are and what we value. That’s about the best that [art] can do for us.”

Megan Labrise is a staff writer at Kirkus Reviews and the co-host of the Kirkus podcast, Fully Booked.