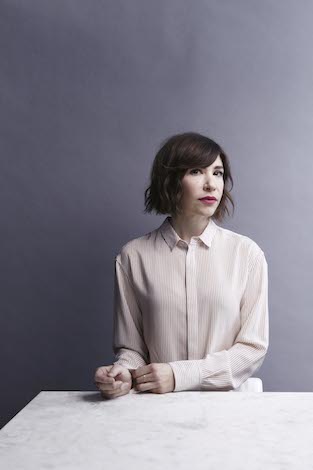 Before Carrie Brownstein had fans, she was one. Growing up in Redmond, Washington, she mock-interviewed the posters on her bedroom walls (Duran Duran, Elvis, James Dean); pleaded to attend a 1985 Madonna concert à la mode in her mother’s wedding dress (request denied); and wrote “inappropriately long letters” to Ralph Macchio, Hollywood’s Brat Pack, and assorted daytime TV soap stars.

“A response, any response, implied that I existed, that I was not a weirdo, that I’d be okay. I could have gone to a school counselor or even talked to my parents, but I needed someone on TV or in the movies to reach out to me, not because they were famous but because they were so far away, it was like being seen from outer space....I always think about these moments when fans approach me, or write letters, or send messages on social media. I try to recall the sturdiness that comes from recognition,” Brownstein writes in Hunger Makes Me a Modern Girl: A Memoir.

Today, Brownstein is recognized as a feminist punk-rock pioneer for Sleater-Kinney, her band with Corin Tucker and Janet Weiss. Newer fans know her from the IFC show Portlandia, written and performed with friend and SNL–alum Fred Armisen, and her role as Syd on the awardwinning Amazon comedy/drama series Transparent. (Furrier fans know her from the Oregon Humane Society, where she won the Volunteer of the Year Award in 2006.)

While most of her creative endeavors have been collaborative, Hunger Makes Me a Modern Girl is Brownstein’s solo show. It’s earnest, endearing, at-times angry, critical, confessional, raw.

“[The title] is from a song, “Modern Girl,” which is a song that was very specifically sort of mine in terms of, it’s rare that Sleater-Kinney had a song that I sang the entirety of,” Brownstein says. “I felt like there was something in that song that would work as a title. To be honest, I thought of ‘Anger Makes Me a Modern Girl,’ but then, ‘hunger’ worked so much better with the book. The word ‘anger’ is so much more distancing; ‘hunger’ is more evocative. Anger is in the book, but it wouldn’t quite encapsulate the tone as well.”

Especially since it’s also funny, as you might expect from the co-creator of a hit comedy sketch show.

“I joked on Twitter once that the title was Does This Guitar Make Me Look Gay?”she says. “Maybe if I was writing the book that Portlandia fans thought I was going to write—it sounds like such a schlocky humor book title, and then there would be a colon and a subtitle after that.”

Hunger isn’t that Portlandia book (the show receives only incidental mention in the epilogue) but the compelling chronicle of a born performer, from fandom to stardom.

“I needed to press myself up against small stages, risking crushed toes, bruised sides, and the unpredictable undulation of the pit, just so I could get a glimpse of who I wanted to be,” writes Brownstein of her earliest show-going experiences, around the time she got her first guitar: the cherry red Epiphone copy of a Fender Stratocaster.

At 19, she moved downstate to Olympia, ostensibly to attend The Evergreen State College but mostly to join the punk scene in progress. She answered musician-wanted ads in the local newspaper. One requested a “girl guitarist” but stipulated “no wanky solos.” “That is me, I thought,” Brownstein writes. She founded Riot Grrrl band Excuse 17 before linking up with Tucker and, later, Weiss. In the memoir, Brownstein offers up the stories behind the songs, albums, tours, and more—from the high of being named “America’s best rock band” by legendary music critic Greil Marcus, circa 2000, to the devastation of the band’s 2006 breakup.

“When I started writing the book, we were not getting back together,” says Brownstein, whose eventual reunion with Tucker and Weiss resulted in “No Cities to Love,” their first album in a decade, in January of this year. “There was a strange sense of almost exhuming the band through writing, even though, in reality, that’s not what happened. But for myself, in my own journey back to that band, and appreciating it, and wanting and needing it, I felt like I did sort of resurrect my own desire to perform with Corin and Janet. By the time we were recording and putting out a record and touring, I was relieved to have an end to the book that was different from the strange sadness with which it would have originally ended.”

When she started writing the book, it wasn’t a memoir at all: Brownstein first sold a book of cultural criticism, entitled The Sound of Where You Are, inspired by blogging for NPR on 21st-century music-making and music appreciation.

“It was much more music criticism, cultural commentary, a book about fandom, the way that technology changes our relationship to music,” she says. “But as I began writing it, I stalled out. With every passing month, it just felt like this is an impossible goal post, trying to write about the changing nature of listening and the changing nature of our relationship to music—if I’m not putting this out now, it feels kind of irrelevant. At the same time, I felt like my most interesting pieces for NPR had myself in the center of the story, because m

y experience was unique and different than someone else’s take on a certain band or a certain time period. So that’s when I started really considered changing the idea of a book to a memoir.”

Hunger ended up incorporating many of Sound’s themes—likewhat it means to be onstage, as opposed to pressed up against one.

“There is a gulf of misunderstanding between musicians and their fans and often so much desperation that the musician can’t possibly assuage, rectify, or heal,” she writes. “You feel helpless and you feel guilty. With Sleater-Kinney fans I tried to be generous, but I soon grew uneasy. For a long while I could share nothing more than the music itself. I think I was too scared to be open with the fans because I knew how bottomless their need could be. How could I help if I was just like them? I was afraid I might not be able to lessen their pain or live up to their ideals; I would be revealed as a fraud, unworthy, and insubstantial. The disconnect between who I was on- and offstage would be so pronounced as to be jarring. Me, so small, so unqualified.”

Luckily, the only thing Brownstein seems unqualified to do is write a typical, tell-all celebrity memoir. That recognition is what ultimately led her to select Riverhead Books as her publisher.

“What I loved about Riverhead was that they did not see this in any way as a celebrity memoir,” she says. “To me, that’s a mind-boggling category for myself, because I feel like, culturally, I exist not there. It felt false and also like I wasn’t going to live up to the idea of a celebrity memoir. It wasn’t going to be salacious, it wasn’t going to be pop enough, it was just going to exist in this liminal space. And I feel like Riverhead was like, ‘Well, you’re a writer. That’s who we put out—we put out writers,’ and that’s what really appealed to me.”

The richness of the writing ensures that Hunger will satisfy die-hard Sleater-Kinney fans as well as those who’ve never heard a note.

“I do think, objectively, that there is a way of writing about one’s own life and experience that, it should be approached, I think, the same way you would approach any artistic or creative endeavor: with a sense of deliberation, with a sense of storytelling, with an artfulness,” Brownstein says. “To divorce it from that is sort of a diary. Whether [this book] achieves that is different, but I think the intention is to create something that hopefully exists in a way that’s bigger than who you are—you know what I mean? That you could almost sort of remove the person from the story and then have this kind of experience that’s as exciting and lived-in as fiction can feel, because of where your imagination goes.”