An Interview with Charles Tabb 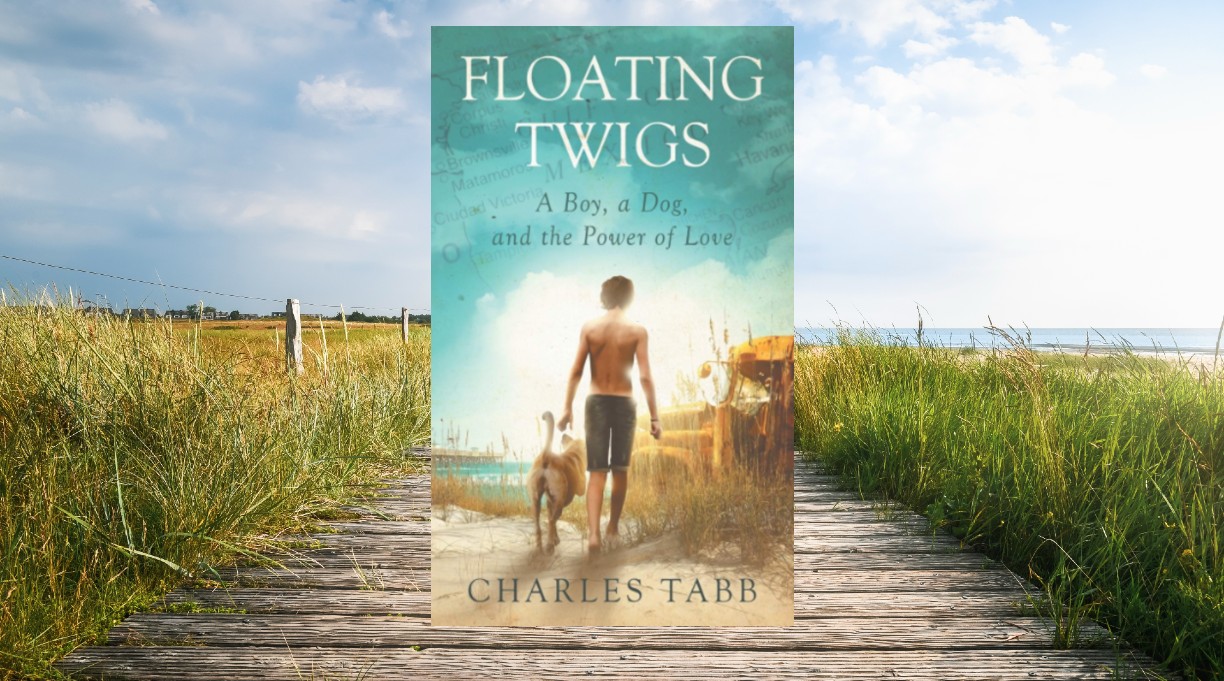 When Charles Tabb retired from his career as an English teacher, he finally had time to do what he’d wanted to do his whole life: write. Tabb, who now lives with his wife and their dogs and horses in Virginia, has always felt joy and love for storytelling. But when it came to writing Floating Twigs, he was inspired by a traumatic childhood memory about a starving dog that came up to him and his friends.

Instead of writing a grim story about poverty and hopelessness, Tabb chose to take that difficult memory and turn it into something different. In his story, Jack, the young narrator, approaches the stray dog and decides to give him a loving home:

I knelt to pet him, and he wagged his tail some more and licked my face. I could smell the raw bacon on his breath. I fed him the rest of it a piece at a time and smiled down at what I was already viewing as my new dog. “See? He’s my dog.” I looked at him as if he had been transformed into an award-winning show dog. “Come home with me, boy. I’ll figure out a way to fatten you up.”

In Floating Twigs, Jack looks back on his impoverished childhood in the Florida Panhandle when he adopted that stray dog, named him Bones, and took on odd jobs around town to earn money for food and veterinary care. The novel may start with the relationship between Jack and his dog, but it expands to look at Jack’s relationships with the community outcasts who take care of him in what Kirkus Reviews calls “a poignant and compelling narrative of a boy’s search for connection and meaning.”

Much of the book’s premise comes from Tabb’s memories of his own childhood as well as from the struggles of a friend who was largely neglected by his parents. Tabb doesn’t shy away from the harsh realities of poverty, alcoholism, and trauma, but the story is also full of love and the possibilities of human connection. “What I like to think of this book is that it shows, even if you go through a traumatic event, how something good can come out of it,” says Tabb.

For Jack, that good comes from the relationships he builds with Hank, a World War II vet living in an abandoned school bus, and Mary Jane, a widow and local oddball. Hank and Mary Jane see how Jack’s alcoholic parents mistreat him and how hard Jack is working to take responsibility for his dog. The both of them give Jack odd jobs so they have an excuse to pay him and step in to provide Jack with the parental guidance and support he so desperately needs.

“The dog is symbolic of Jack,” says Tabb. “In an emotional and spiritual sense, Jack is starving. There’s that parallel, and Hank becomes to Jack what Jack is to Bones.”

Looming over the story is the presence of the Vietnam War, in which Jack’s older brother is off fighting, and of course there’s Hank’s history as a veteran himself. There’s also the cruel opinions of the other people in town, who look with suspicion upon Hank’s relationship with a 13-year-old boy, never dreaming that Hank could be giving Jack needed guidance.

But no matter what difficulties Jack faces from his real parents or what judgment Hank and Mary Jane experience as they bond with Jack, the novel is more about how Jack blossoms when given care and attention. And how he, in turn, can give that to Bones, so that together, they can face whatever the world has to throw at them.

Tabb believes that a positive, open-hearted attitude, like those Hank, Jack, and Mary Jane have for each other, is the key to building happiness, even out of a difficult situation. “People have this tendency of looking at something happening and trying to find its most negative aspect,” says Tabb, who credits his mother for teaching him to believe the best of people as much as possible. While he acknowledges that sometimes this approach leads to disappointment, he “would not trade [my] outlook for another one.”

Tabb always wanted to write, but during his career as a teacher, he never found the time. Once he retired and finally had the space to write, he struggled with self-doubt. “It literally took about a couple hundred reviews of people saying ‘This is my favorite book,’ [and] ‘I love this book’ [before] I started thinking, ‘Well, gee, maybe I did write a good book!’ ”

Eventually he came to see how his career as an English teacher brought another dimension to his fiction writing. His students used to call his class “Life Lessons 101” for the ways in which he brought out universal themes in the stories he taught. When he found himself wishing he’d been able to write Floating Twigs earlier, it was his wife who reminded him that all his work with his students helped him later on when he wanted to write a book about keeping a positive outlook and making the most of your life.

So many people loved Floating Twigs that eventually Tabb was approached by a Russian publisher looking to make a translation for Russian readers. A sequel, Finding Twigs, will be available for readers in the fall of 2021.

If that’s too long to wait, his other literary novel, Canaries’ Song, the story of a widower and the obstacles he faces as he raises his three daughters, is available now. Or for something completely different, readers can check out Tabb’s gritty detective series, starting with Hell Is Empty and The Purger, before the third book, The Whirligig of Time, comes out next year. All of Tabb’s books are available on his website and on Amazon.

Chelsea Ennen is a writer living in Brooklyn, New York.