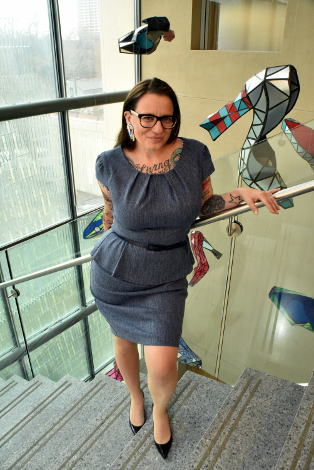 Throughout her childhood, Cherie Dimaline listened to her grandmother’s stories. Her grandmother and her sisters told and retold the tales of their tribe, the Métis, to the young Dimaline, in both English and Michif, until she knew them as well as they did. The Métis have been pushed from their land and the older generations have died, but Dimaline remembers the stories. “We still exist the way we originally did in those stories,” she says, “so it becomes a matter of not just community record, but really cultural survival.”

In The Marrow Thieves, Dimaline reimagines these stories in an apocalyptic future. Global warming has ravaged the planet, and the population of what used to be Canada is losing the ability to dream. The only cure is found in the bone marrow of indigenous people, so they’re once again being rounded up in residential schools. The narrator, Frenchie, is a Métis teenager on the run with a ragtag group of other First Nations people as they travel steadily north. Day to day they’re just trying to escape the authorities who plan to suck them dry, but they’re also trying to reconnect with their history and find a safe place to feel at home.

The Marrow Thieves is Dimaline’s first book for young adults, and it’s important to her that indigenous youth can see themselves in a vision of the future and ideally find hope in the characters’ survival despite the forces stacked against them. “My first audience is always my community, because that’s where my stories come from, that’s where my responsibilities are,” she says. However, she’s pleased the book has drawn a diverse readership, and she hopes it will inspire non-indigenous readers to learn more about the cultures she depicts.

She also hopes that by setting the novel in the future she can encourage readers to “put aside a bit of that defensiveness, I guess, that comes with talking about a difficult history, like say, I dunno, attempted genocide.” If they relate to the characters in the book, perhaps they will put more thought into preventing this kind of atrocity in the future.

Despite the tragic history of indigenous people in Canada, Dimaline expresses surprisingly little anger toward white society. She recalls one elder’s explanation that throughout history, white people have systematically turned on their own medicine people, from the Roman suppression of the druids to the Salem witch trials. So now we’re a culture without elders to guide us. “Really it’s a society of children,” she says, “and when you’re dealing with children, the best approach is kindness.”

It’s that sickness, that lack of connection that plagues the people of The Marrow Thieves as well. The dreams represent a connection to something larger, and once lost, the afflicted slowly go mad. “When you lose that connection to community, that necessary, intangible thing, it impacts everything in your life,” Dimaline says. It’s a fate she wants to help her own people avoid—despite the upheavals in their history—by carrying on their

Nonetheless, she finds that many are ignorant of the possibility of a bright future for First Nations people. When she told people she was writing science fiction about indigenous characters, they often reacted with confusion. “I realized that in people’s minds when they think indigenous, they think history, right? Because Indians are dead now so obviously you’re talking about the history,” she says.

Dimaline disagrees with this assessment, obviously. In fact, she thinks indigenous people’s adaptability makes them uniquely suited to face future disasters: “If anyone’s going to fucking survive an apocalypse, it’s going to be the people who already did.”