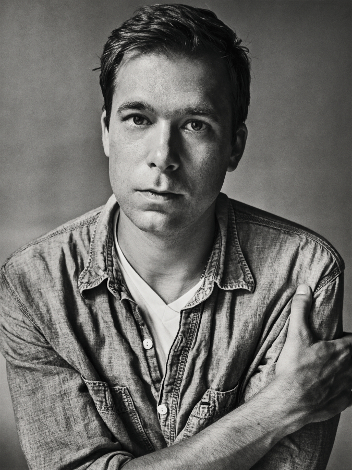 Upon meeting, it’s difficult to imagine that Christopher Bollen could have penned so twisted a tale of death and depravity as his new novel, Orient. His easy demeanor, the lightness with which he dances between topics of conversation, his readiness to laugh, none of these qualities seem to mesh with a man whose mind is capable of creating a character (or characters, no spoilers here) who unleashes a series of gruesome murders on an idyllic and isolated Long Island town.

But this story is something he’s been waiting to tell his whole life. “I always knew I wanted to write mysteries,” Bollen says. “In fact, I didn't want to write anything else for a very long time.” Agatha Christie was his gateway drug into literature and reading; he was obsessed. “It was frightening,” he says with a laugh. He says that his classmates were probably worried about him in the sixth grade. “I was totally normal in fifth grade, and then something happened, something terrible happened,” he says, “and I couldn't stop reading Agatha Christie novels.”

When Mills Chevern, a 19-year-old product of California’s foster care system, finds himself down and out as a result of druggy friends in New York City, his kindly neighbor, Paul, offers to take him out to Orient, the last town on the North Fork of Long Island. What should have been a time of recovery, of sea breezes and quiet nights, quickly becomes marred by the mounting death toll that just happened to begin when Mills arrived. Teaming up with Beth, a newly married Orient native, the two try to discover who’s responsible, as all eyes and fingers begin to point toward Mills, the outsider with an unknown past.

Bollen’s first novel, Lightning People, explores some of the same ideas found in Orient—the meeting of cultures, the idea of America—but it wasn’t the whodunnit mystery he’d been dreaming of since childhood. The process, however, unintentionally led him to this chilling work.

“It just so happened that I was in Orient, staying at a friend’s house, finishing up the edits of Lightning People. It was so beautiful, so pristine. Wild grasses blowing in the bay beyond the backyard. Children bike riding. And then,” Bollen says with a cock of his eyebrow, “night crept in. It was so dark out there, I became terrified.” Bollen had been living in New York City since 1996, sometimes in dangerous neighorhoods, but the suburban setting of Orient terrified him. “I actually took a knife from the kitchen,” he adds laughing. “It was such a childish reaction. And then the next morning, it was beautiful again. I really liked this idea: dream by day and then nightmare by night. How something can shift so radically. And because Orient is only connected by a very thin causeway, I started to think of Murder on the Orient Express. That's where the idea for the novel started. It could never have been set anywhere else. The only things I knew were that it needs to be a novel set in Orient, and the title needs to be Orient. Everything else just came after that fact.”

While the idea for the novel may not have begun with protagonist Mills, the inclusion of such a character is something Bollen had been toying with for some time.

“I think I've always been obsessed with the idea of homelessness,” Bollen says. “The freedom and desperation of it. Mills really is homeless, and it's a vulnerable place to be when you don't have anyone to vouch for you, or to go back to. The youngest person in the novel is in the most jeopardizing and dangerous place—that was really interesting to me.

In a novel that also taps into the tensions between natives and newcomers, year-rounders (those who live in Orient full-time) and weekenders (New Yorkers who come out to the country on weekends), there’s a level of symmetry in the fact that Bollen, an outsider, commandeered this sleepy town to tell his story. And how does he expect the locals to take his literary invasion?

“I really think that I won't be allowed over the causeway,” he says laughing, eyes wide with mock horror. “I think they're going to set up a toll booth with a picture of me and not let me pass. But,” he concludes, his earnestness returning, “I think if they actually read it, they’ll see I’m not trying to take down their neighborhood. I love Orient. It's beautiful.”