Authors of WAR OF THE ENCYLCOPAEDISTS 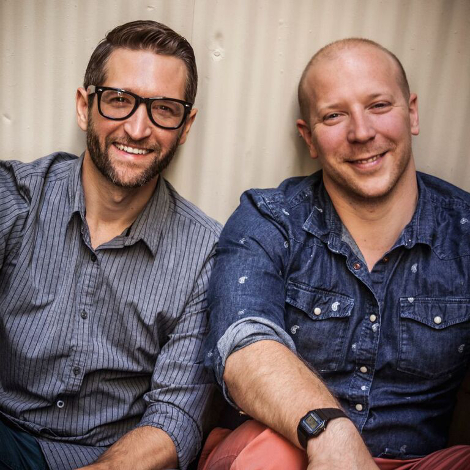 If you didn’t know better, you’d assume that Christopher Robinson and Gavin Kovite were brothers by the way they talk together.

Even speaking from two different locations for a conference call interview, they find a natural rhythm together, they finish each other’s thoughts, and they are quick to laugh. It’s the sort of chemistry that shows itself in the pages of their first novel, War of the Encyclopaedists, which they wrote together over the span of five years.

“Sometimes it feels like Gavin and I are the same person,” Robinson says.

The two met as students at the University of Washington shortly before traveling together on a study abroad trip in Rome. To put things in Kovite’s words: “It was indeed a bromance.”

The two found an easy chemistry together and began writing a novel while in Italy. That book wouldn’t come to anything, but it set them up for Encyclopaedists. The story is based around two close friends—Montauk and Corderoy—whose lives of hosting parties in the hipster-swank Seattle neighborhood of Capitol Hill diverge suddenly when Montauk’s National Guard unit is called to Iraq and Corderoy moves to Boston as an English graduate student. Both find themselves aimless and detached in very different places for not so different reasons. It’s an entertaining and insightful story of what it is to be young in America during a time of war.

It’s odd to say that a book with war as a principal component is entertaining, but Encyclopaedists is not a traditional war book, perhaps because Iraq was not a traditional war. There were few conventional battles, much of Montauk’s tour is filled with boredom as he struggles to understand a country with a history and sectarian divisions he can’t comprehend. Back in America, Corderoy is surrounded by academics equally as clueless but with enough cynicism to compensate. It’s like many coming-of-age novels, only this generation is coming of age during a divisive American conflict. Corderoy doesn’t know why he’s in grad school, Montauk doesn’t know how to accomplish his “mission” and everyone has an opinion on Iraq, none of which are completely accurate.

“I think it’s important that Corderoy and Montauk are these hipstery college kids whose lives diverge from each other,” Robinson says. “They’re almost mirrors of each other.”

The characters’ circumstances mirror those of their authors as well. Kovite served a tour of duty as an Army platoon leader assigned to a Green Zone checkpoint and Robinson attended grad school on the east coast and has several friends who have served in war zones.

“It was based on two dudes like us,” Kovite says with a laugh.

“And the idea of juxtaposing those two worlds, the academic world and the military occupation,” Robinson says. “There’s so much interesting interplay in those worlds. They’re both so insular in their own way. They both have this jargon heavy lingo that people in those worlds use to keep themselves in positions of ascendency. The people most qualified to judge if the military is needed are the military and the people most qualified to judge the value of a literary work are English professors.”

Though the circumstances are similar, the authors are quick to point out that the characters have their own identity. Robinson did not drop out of school as his fictional counterpart Corderoy does. Though both did earn money from medical experiments for a time.

“You did do the cocaine study, right?” Gavin asks, referencing a particular study that involved Corderoy taking the drug.

Robinson laughs. “I did.”

The premise of the book, told in alternating points of view between Corderoy and Montauk gave the authors a blue print of how to initially divide the workload. Robinson wrote the first drafts of Corderoy’s story in Boston while Kovite wrote the initial pages of Montauk’s war experience. From there, however, they edited, brainstormed, and rewrote together often descending into what Kovite calls “Chris-Gavin land.”

They find it hard to distinguish their individual writing voices. Their methods are easier to identify.

“My tendency would be to over control and to deaden something from trying to refine it too much,” Robinson says. “Gavin is by nature a little messier. His tendency is to be chaotic and to not have things cohere. Those things complement each other really well.”

“I think we’re both better than we maybe are alone, at least with this novel we were,” Kovite adds.

The two have their own projects but are currently at work on another novel, one set in a near-future Detroit. Kovite, who will be leaving his job as an Army prosecutor in June, is looking forward to joining his friend as a full-time writer.

“For a while there I didn’t believe in the novel,” Kovite says. “Chris was working his ass off….It was years and it wasn’t done and I was like, ‘Chris you got to get a job. It’s not going to end well.’”

“It’s so much more fun writing together,” Robinson says. “Writing is lonely…I think we push each other to be better writers.”