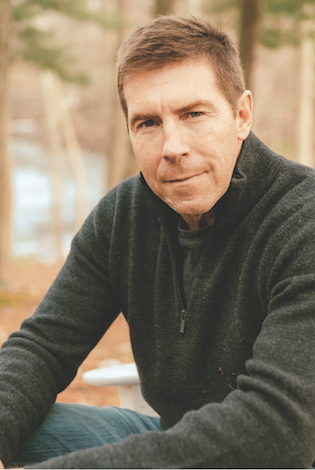 Reading Christopher Scotton’s debut novel The Secret Wisdom of the Earth is akin to staring through the pinhole of a kaleidoscope: Just when you think you have the main storyline in your sights, the pattern shifts ever so slightly to present dazzling new characters or a puzzling plot twist and a new overarching theme takes shape.

If pressed for an elevator pitch, one might say this is the coming-of-age tale of 14-year-old Kevin, who—with his grief-stricken mother—seeks refuge at his grandfather “Pops’” house in the hills of Appalachia following the ghastly death of his younger brother.

But the novel is also the story of the life-changing friendship between two teenage boys during a seminal summer of their lives, as Kevin befriends townie Buzzy Fink and receives an education in the mysticism and magic of the mountains. This is a David and Goliath tale, as the folks in the fictional coal town of Medgar, Kentucky are up against a large-scale mining operation that promises much-needed jobs but renders their beloved landscape poisoned and ruined.  It is the story of one small town’s struggle to both grapple with the murder of one of its most beloved citizens and posthumously accept his homosexuality.  And it’s an adventure tale, as Kevin, Buzzy, and Pops embark on a “tramp” through the mountains, a harrowing trip that awakens Kevin to lessons which will carry him into manhood. Last, but certainly not least, it is a grand gesture of homage to the earth, which, as Scotton says, “has tremendous healing powers, to heal itself and heal us as its caretakers.”

The novel has already touched a significant number of readers and the buzz within the industry reached a near fever-pitch in advance of the book’s publication this week. Soon after his editor acquired the novel in early 2013, the book benefited from a groundswell of in-house enthusiasm from the publisher’s sales force and has also recently been championed by booksellers, early readers, librarians and industry media. Scotton says he feels “effusive gratitude” that those in the industry “who [have] read thousands of books think this one is anyone good.”

“Good” is an understatement. In fact, words like “instant classic,” “epic,” “sweeping” and the “elusive great American novel” have been used to describe the novel; the author has been likened to Mark Twain, John Irving and Harper Lee.

Such comparisons to the great figures in America’s literary heritage are not lost on Scotton, who credits American classics as his inspiration to be a novelist. “The summer I turned 14, I read Call of the Wild, Huck Finn, To Kill a Mockingbird, Lord of the Flies. It was a seminal summer for me,” he says. “I could not read fast enough and I thought, ‘I gotta do this, I gotta be a novelist.’ ”

So he set off on a path typical of many writers: excelling in his high school English classes and majoring in English and communication at a small liberal arts college. Along the way he pecked away at “bad short stories and atrocious essays,” he says.

But during the next 15 years, Scotton found every excuse in the world not to write.  “I was the king of procrastination,” he admits. “Finally when I was 38, I just had an epiphany. I had this great, great dream to be a writer, but I had not done anything about it. I didn’t want to turn 40 and have this great dream be my single biggest regret.”

The next day, he woke up and wrote the very first line of the novel.

Nearly 14 years later, Scotton will see that same first line in print, as part of actual bound hardcover copies of his book on shelves in bookstores across the country. Such a sight for him is a lifelong dream realized.

So what exactly, is it about this book that has booksellers and sales reps across the country atwitter?

The novel has the essential ingredients of a classic: indelible, complex characters and an unforgettable and authentic setting—both of which were inspired by Scotton’s own experiences backpacking through the Appalachian Trail in his 20s. “I got to know that region very well from living off the land for a bit and fell in love with the people and the music.…That region of Appalachia is not just beautiful but, in many ways, sad,” he says. “There’s a rich paradox there: [The people of Appalachia are] quirky and clannish, with a tremendous amount of hope but with few economic options, there is also a sting of hopelessness.”

I suspect this novel will find its way into the canon of classic American literature primarily because Scotton transports us—through an ever-shifting sequence of visceral and hypnotic scenes—into a world so unlike our own but one that embodies the universal human experience so completely that by the time we have turned the last page, we have witnessed a vast spectrum of emotion: love, fear, loss, grief, betrayal, hope, friendship, wonder, and redemption.

The result is an epic, sweeping story—one that would be an ambitious undertaking for the most veteran author. That it arrives from the pen of a first-time novelist is a triumph.

Emily Lavelle is a writer based in New York City.