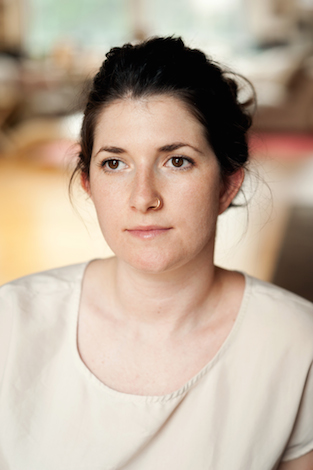 Born in the Owens Valley, an arid region east of the Sierra Nevada that was notoriously tapped for water by William Mulholland in the early 1900s to build the Los Angeles Aqueduct, Claire Vaye Watkins recognized one glaring hole with her portrayal of the West in her critically acclaimed debut collection of stories. “When I finished Battleborn, I had this nagging feeling that I hadn’t actually written about the American West at all because I hadn’t written about water,” she says.

Her highly anticipated first novel, Gold Fame Citrus, dives straight into the empty water well. Set in a pre-apocalyptic, futuristic Southern California, an undefined catastrophe has plagued the once industrious land with draught. Luz, a former model, and Ray, an AWOL soldier from a mysterious war, shack up together in an abandoned mansion in Laurel Canyon in Los Angeles surviving on rationed cola, crackers, and the rare contraband blueberries. When they come across a neglected toddler who seems in need of rescuing, the couple’s quiet domesticity is upended as they decide to flee the city with the child for greener pastures. Instead, they find a gaping, blistering wasteland of even greater loss.

The desert-strewn canvas of Gold Fame Citrus is epic in scope: part frontier history, ecological survey, elegy for mankind, and love story. For almost two years, Watkins toiled over the first two chapters as she tried to wrap her head around the scale and pacing of the novel. “It took me a long, long time to understand what the novel was up to and then to just kind of make peace with the fact that it was fine that I didn’t know,” Watkins explains. “One day I would be writing about the Mormon exodus and I was like, ‘Okey-doke, that’s what I’m doing today.’ Instead of saying, ‘Here’s this novel that is supposed to have the Mormon exodus in it, then I would be like, ‘Well, it now has it in it because I wrote it in there, so that’s what it is.’ ”

In Watkins’ organic journey into this sand-swept landscape, the narrative is flooded with life. Fantastical catalogs of “neo-fauna,” nostalgic rides on lost carousels, and mystical recipes for home remedies offer illuminating detours from the bleak new world. “I wanted to write a book that was very language-driven and very satisfying and sensual on the senses level, but that also had a really gripping plot,” says Watkins. Her hearty, adaptable prose immerses the reader into unchartered territory: “They watched the sandsnow mirage, hypnotized by fertilizer dust and saline particulate and the pulverized bones of ancient sea creatures, though they did not know it. Did not know but felt this magnetic incandescence working the way the moon did, tugging at the iron in their blood. Knew only that it left them not breathless but with their breaths exactly synchronized.”

As the survival story moves forward with the characters balancing on the brink of extinction, Watkins draws the reader back into the complicated history of the West. “This is a novel that is posturing as a novel about the future, but it’s not really about the future at all; it’s about the past,” she says.

“It’s about the origin story of the American West, and about how in the American West right now there is a confluence of two different types of time. On the one hand, it’s history as we know it as Westerners, which is very, very short…that sense of time that starts with the frontier comes up against geologic time,” she explains. “How long does it take to replenish an aquifer that we’ve drained in three generations? A really, really, really long time. If we spent one generation building a nuclear storage facility, how long would the nuclear waste be poisonous? It would be longer than humans have been upright. It’s crazy to think about these different modes of time. That’s part of why we have such a hard time doing anything about these troubles with our environment because we can’t think in geologic time.”

While traversing the past and glimpsing a spooky dystopian future, Gold Fame Citrus is simultaneously rooted in the breaking point of the present as it critiques society’s larger relationship to nature. As with the recent headlines of the California draught, Watkins is extremely perplexed by how we often regionalize such global environmental issues that affect everyone. “I call it ‘Schadenfornia,’ which is the pleasure that our culture gets at bad things happening to California, which is actually because it’s pretty great there,” she says.

Heeding the eerily apt prophesies of one of Watkins’ visionary characters, this is not just a story about draught in the West, but a collective failure of humanity: “In fact there was no water crisis, he maintained. Theirs was a human crisis. What they called drought was merely the mechanism of a long overdue social contraction.”

Bridgette Bates is a writer and editor in Los Angeles. A recipient of a Fulbright and a Boston Review “Discovery” Prize, her first book, What Is Not Missing Is Light, won Rescue Press’ Black Box Poetry Prize.
MORE FEATURES
POPULAR KIRKUS STARS