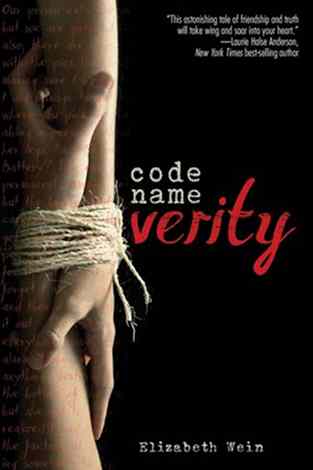 When secret agent “Verity” is caught by the Gestapo, much like Scheherezade, she promises to write down the details of her mission in hopes of prolonging her life and avoiding further torture. The narrative she weaves recounts the history of her friendship with Maddie, who piloted their plane that crashed in Nazi-occupied France. While Wein’s masterful plot is too explosive to touch without spoiling it, we were eager to discuss other aspects of the novel with this dynamic New York City–born author, who now hails from Scotland.

This story has a powerful ending.

I was an emotional wreck for three weeks after I finished the book. I have never had a writing experience like this—very, for very intense, in part because of writing in first person. The manuscript in the novel is conflated with the manuscript in my mind because it has a kind of virtual existence as an actual manuscript—it’s all these different pieces of paper and notebooks.

I do like playing with that in the novel, but that’s what makes it so emotional. Writing this was different because I could really put myself in the head of the person writing and say, I’ve got to write 30 pages today; I have no choice. And I’d think, I can’t get up. Now what am I going to say today? Having a character who was actually forced to sit down and write made a big difference to the outcome of the story because I was just so emotionally invested in everybody.

The asides about writing in the novel seem as if you’re talking to yourself.

Absolutely. It was so much fun. It was very liberating for me as an author. My other books have all been in third person. They’ve also been set in the 6th century. So all of a sudden I had 1,500 more years of world literature and history that I could refer to, which was a great relief. I didn’t have to check everything to make sure it would have been in use, but also just to play around with style.

I was really having fun doing a dramatic scene, or filling the prescription forms, changing tenses—every now and then Verity will slip into the present tense. As a writer, I never really allowed myself anything that gave me that much liberty before. Also, the character is trying out writing, so I’m kind of sharing that curious joy. It was definitely self-indulgent! [laughs]

In your afterword, you express regret over not being able to go through and account for “Absolutely Every Last Detail.” With historical fiction, do you feel added pressure for historical accuracy versus fictive ingenuity?

I think, actually, the pressure comes because it’s considered a children’s book. I’m under the impression that with historical fiction, or fiction set in an historical period, that the bar is much higher for accuracy. Not just in getting the historical details right, but for editing and copy editing children’s literature, I feel there are higher expectations than stuff that’s aimed at adults.

I really do. This is a theory I’ve developed over a couple of years. I would say romances can be full of bloopers, and nobody cares. The same with movies. You get all these characters using slang that they didn’t even have in that time period, wearing velvet cloth when it wasn’t invented until the 16th century—whatever, lots of niggling things.

I probably shouldn’t name names, but I see inaccuracies, and sometimes they make me stumble, and sometimes, if I’m enjoying the book enough, I’m like OK, well…But I think perhaps because history is something we teach, and children are still learning, there is, therefore, this higher expectation that it must be presented properly. I don’t know why, but I do find that kids’ books are edited better than adult literature. With children’s literature, you can’t just tell a ripping good story. You have to back it up with facts.

Would you say one of the novel’s themes is look both ways when crossing the street?

[laughs] Perhaps more when in Rome…

Seriously, I love the irony of Verity being so clever and duplicitous but then getting caught by making a simple mistake of looking the wrong way.

I quite liked that irony, too, but if you go back later, which I don’t expect many readers to do, you realize she’s not really thinking about where she’s walking because there is a row of dead bodies hanging on the Town Hall as she comes out of it, and she’s distracted. So there’s a really good reason she drops out of character at that moment. It’s all there in the book. If you delve deeply enough, you’ll catch it. If not, it just seems she makes mistakes.

The novel is riddled with violence and some intimate details of torture. Do you think teens today are more or less equipped to deal with that than those living during the time period of the novel?

That’s a good question. The teenagers in the time of the novel might have actually seen more violence, but they didn’t think anything about it. It wouldn’t have been presented to them in literature in quite the same way it is now. I would say they would have been just as equipped to deal with violence then as they are now. The difference would come with the language and the way that sex is presented. We’re much more open about sex now than they would have been then. I don’t actually think the violence would have been more shocking then than now.

You know, that battle scene at the end is actually the first I’ve written. How I’ve gotten through five books based on Arthurian legend and set in the 6th century and never written a battle scene, I don’t know, but that was the first one, and it was really very shocking to me. The extreme violence that takes place had to be there in order to bring about some critical actions. It had to be that bad, but I don’t describe it graphically. I don’t really like that. It’s not that graphic descriptions turn me off. I just think they’re kind of melodramatic. You can get a much more chilling effect by leaving things out than by describing all the blood and gore.

I also write teen horror under a pseudonym, and I was writing this really, well really gory book while working on this novel. There was a pile more blood and guts in this other book, but that I find in no way as horrific as the understated stuff. I’ve actually had far more people say they were turned off by the descriptions of aircraft here than by the torture! [laughs] If anyone had told me to take anything out, I would have.