We talk to the duo behind DRACUL 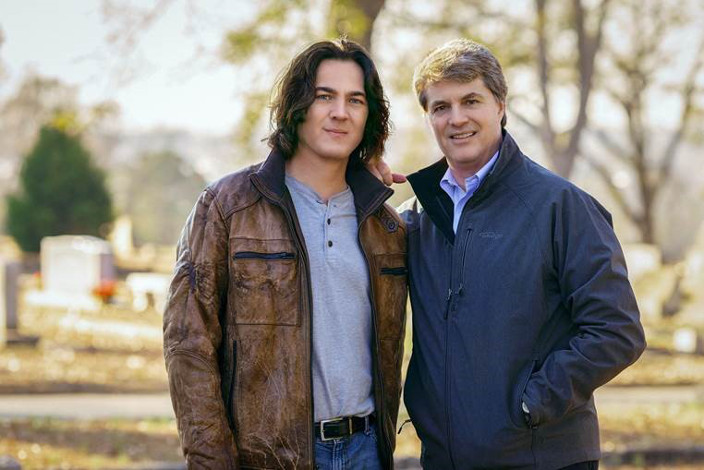 A young man who has barricaded himself inside a room struggles to stay awake as he points a rifle at the door. Outside, an unspeakable evil is fighting to charge in and take him, and it keeps banging on the door. Will the crucifixes and his knife be enough to save him if it breaks in?

Given that the young man is none other than a young Bram Stoker, readers can feel secure that he’ll pull through. But this chilling scene is only the beginning of the chills and thrills coming Bram’s way in Dracul, a Dracula prequel by Dacre Stoker and J.D. Barker.

Stoker is no stranger to the world of Dracula, not only because he’s already co-written a sequel to the classic horror novel, but because he is, in fact, Bram Stoker’s great grand-nephew. Stoker, who enthusiastically keeps up the family business as manager of the Stoker estate, had been thinking about co-writing a Dracula prequel when he came across the work of novelist J.D. Barker. After they were seated next to each other at an author signing, Stoker struck up a conversation with Barker; the result is this spooky, appropriately bloody novel.

The idea for their collaboration didn’t come from the original novel, but from what was cut from it. As Bram was trying to get his book published, London was still living in terror of Jack the Ripper. His publishers were concerned about the frightening tale causing even more panic and made him cut the first 101 pages and change the preface where Bram claimed the story was all true.

In their quest to write the beginning Bram would have wanted, Stoker and Barker pored over as many of his original materials as they could find, including notes written on scraps of paper and handwritten notes from his editors. “Seeing that kind of information and being that close to that material, it really felt like Bram was standing in the room with us,” says Barker.

Between those notes, the original preface, and a rare, original typed manuscript covered in Bram’s notes that they only had access to for two hours, Barker and Stoker pieced together an idea of what might have been in those first 101 pages, and what might happen in a prequel to a book that was only half published.

The result is a dense, layered story with an entire family of characters. Bram’s sister, Matilda, is a major figure, as is Bram’s childhood nurse, Ellen Crone, who may be more than she seems. Bram was a sickly child who eventually grew up to be an exemplary athlete. Stoker and Barker took that real detail and took the imaginative leap that, perhaps, maybe there was something otherworldly in his recovery. Other biographical tidbits that grow into narrative details include a doctor who has his wife institutionalized and told no one why, a mysterious lock of hair, and a cursed village.

Perhaps the most notable biographical detail is that preface, Bram’s claim that his story was true. And like his great-grand nephew after him, Bram was nothing if not a meticulous researcher. Did he find something more than folk tales, something he wanted to share with his fellow humans?

In the research that Bram did about vampires, he “believed people really believed they were real,” Dacre says. After all, there are plenty of things that are real and true that we don’t yet understand or perhaps aren’t capable of understanding. “That wilful suspension of disbelief that he created makes a situation where maybe it is true, and maybe Bram believes it…so…I keep a cross handy!”