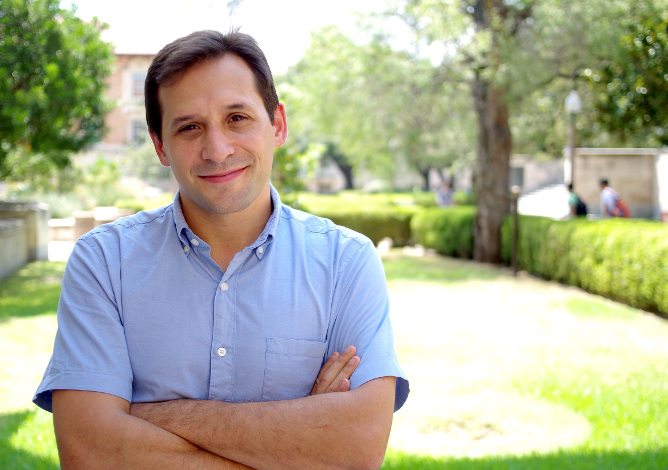 “The ex-believers—the heretics, the apostates—are the problem children of any politics, in any time” writes Daniel Oppenheimer in his debut book Exit Right: The People Who Left the Left and Reshaped the American Century. The author’s aphorism rings true, yet there is something especially fascinating about left to right conversions in the 20th century United States. Oppenheimer explores why this is with his six miniature biographies of political converts—Whittaker Chambers, James Burnham, Ronald Reagan, Norman Podhoretz, David Horowitz, and Christopher Hitchens. A chapter is dedicated to each subject and the origin story of his conversion, told with a generous and open perspective that asks the reader to suspend judgment. “The stories are worth telling because it’s during the period of political transition, when the bones of one’s belief system are broken and poking out through the skin, that the contingency and complexity of belief become most visible,” he writes.

Speaking on the phone from Austin, Oppenheimer explains why he is well-suited to the project of chronicling the conversion stories of largely New York intellectuals, about whom much has already been written. “I don’t take politics as personally as some people do,” he says. “Part of what attracted me to the project is that I could read these guys whose politics I disagree with profoundly and just kind of not have my buttons pushed.” When he interviewed the two subjects who were still alive at the time of writing—Podhoretz and Horowitz—he anticipated heated discussions. Instead these conversations mostly affirmed his subjects’ personality traits, which he had already surmised. “Podhoretz, in person, at least if you don’t push his buttons, is in the more reflective, mellow phase of his life,” says Oppenheimer. “Horowitz is this incredibly intense guy and will be until the day he dies.”

Oppenheimer attributes much of his equanimous political temperament to an upbringing in a left-wing enclave in Springfield, Massachusetts. One set of his grandparents was communist; his father was a politically active left-winger. “To give you a sense of where my dad is politically, to him Time Magazine is this really conservative publication,” he explains. But his parents allowed him to make up his own mind about his politics. This childhood left him “of the left but free to wrestle with problems of the left,” as he says. Furthermore, he empathized with his subjects who spent large parts of their careers grappling with the orthodoxies of leftist politics.

In the November 15 issue of Kirkus Reviews, our reviewer praised Oppenheimer for his skillful handling of “the interplay between large historical movements and personal anguish” in his stories, which pit the personal struggles of the characters—lost friendships, depression, familial woes—against the great clashes of 20th-century ideologies, the identity crises of American communist parties and other left-wing groups, and the beginnings of neoconservatism. The necessarily conceptual and narrative leaps and hypotheses didn’t come easily to Oppenheimer, though; he learned how to be a critic of the critics from Christopher Hitchens. “He believed that you can kind of just say whatever you want. If I want to say that there was a little house in the back of Whittaker Chambers’ house that his brother built that was a psychological treehouse that enabled him to come in and out of the psychosexual drama that he had with his parents, I can just say it; I’m not an academic, nobody can stop me.”

Though Hitchens’ political transformation was the least stark of all of Oppenheimer’s subjects, except perhaps  Ronald Reagan, Oppenheimer’s account of it is the liveliest story in the book. As a critical biographer, Oppenheimer

found fruitful territory in the literary nature of Hitchen’s politics. And Hitchens’ fascination with the contradictions of  the left was something Oppenheimer could understand. Hitchens’ writing, in fact, led Oppenheimer to the stories of Burnham and Podhoretz, about whom Hitchens “had written such wonderfully nasty things,” he says.

Hitchens was not only the book’s biggest influence, but also its ideal subject, a political thinker for whom almost everything was personal. His best subjects, says Oppenheimer, “are the people whose lives, whose personal stories, intersect with their politics in really interesting ways.” Hot thinking is Oppenheimer’s siren call, not just because of the intrigue, but because it illustrates the sense of flux inherent in the relationship between our politics and our identities. Encapsulating this idea, Oppenheimer writes what might be the best line of the book: “A political identity is always a negotiation, between what it demands and who we are.”