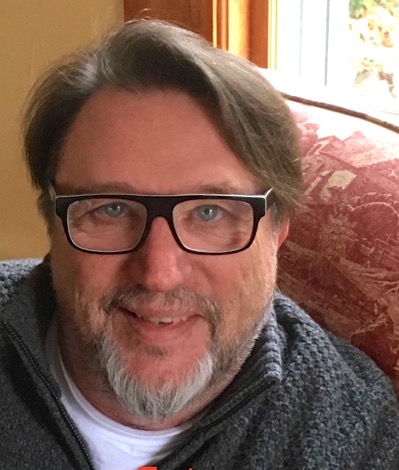 David Elliott admits that he was somewhat taken aback by the runaway success of Bull (2017), his retelling of the classic story of the Minotaur. “But people seemed to like it,” he says modestly. In particular, the reception of a novel in verse form was so enthusiastic that almost immediately Elliott began thinking of the next story to tackle in his uniquely lyrical fashion. Voices: The Final Hours of Joan of Arc was not where he thought he’d end up, though.

“In some ways, I am the least likely person to have written such a book,” he acknowledges. “In the first place, I knew almost nothing about Joan of Arc when I started this. Also, I have no real interest in facts.” But let’s consider the final product, which includes excerpts from the transcripts of the trials of Joan of Arc, both the one that condemned her in 1431 and the one in 1456 that nullified her death sentence. Something substantial must have taken place to shift Elliott so far from his ordinarily fact-free process. That something was awakening at 3 a.m. to see the words “Joan of Arc” emblazoned in fiery letters in the air above his bed. “Now this is my memory of what happened,” he clarifies. “Did it actually happen? I don’t know.” But from that moment he felt a sense of obligation to see Joan’s story told.

While Voices tells the story of Joan of Arc, of her spectacular victories and horrific demise at the stake, hers is not the only voice the reader encounters. In fact, it’s not even the most prevalent one. In a quite literal sense, with their words wrapping and contorting themselves across the pages, the story is woven together based on accounts of those who bore witness to her life. Her hair. Her sword. The fire. Her accusers. Her defenders.

Realizing how much people throughout history have used Joan’s life as a prism for telling their own stories—the suffragists used Joan in their campaigns, as did the Nazis in Vichy France and the French Resistance in WWII—Elliott says he felt honor-bound to try to project as little of himself onto his character. “I was really searching for not the saint, not the hero, but for this young girl who just happened to prefer men's clothes.”

While there were, of course, many different elements that came together to seal Joan’s fate (the geopolitics of the Hundred Years’ War, for one), it was the very human components that stuck with Elliott. Not only did Joan prefer to wear men’s clothing, but she was able to thrive in what was undoubtedly a man’s world of war. “To see the parallels,” he says,” from hundreds of years ago. I mean, we’re still punishing these people who are different. We can’t seem to learn. Why do people hate Nancy Pelosi? So much of it is that she's a woman. She's a strong woman. She's stronger than many of the men. Smarter than many of the men. More experienced than many of the men.”

Voices is a powerful, thoughtful novel that challenges the conventional parameters for young adult literature. Readers will be prompted to reckon with their attitudes toward verse and to embrace the malleability of the English language, which is part of what Elliott set out to do. “I also hope,” he adds, “that boys will read the book, young men. And I hope that when they come across a strong woman, a woman stronger or more capable than they are in certain areas, that they’ll be willing to take a step back.”