Barack Obama in the Viewfinder 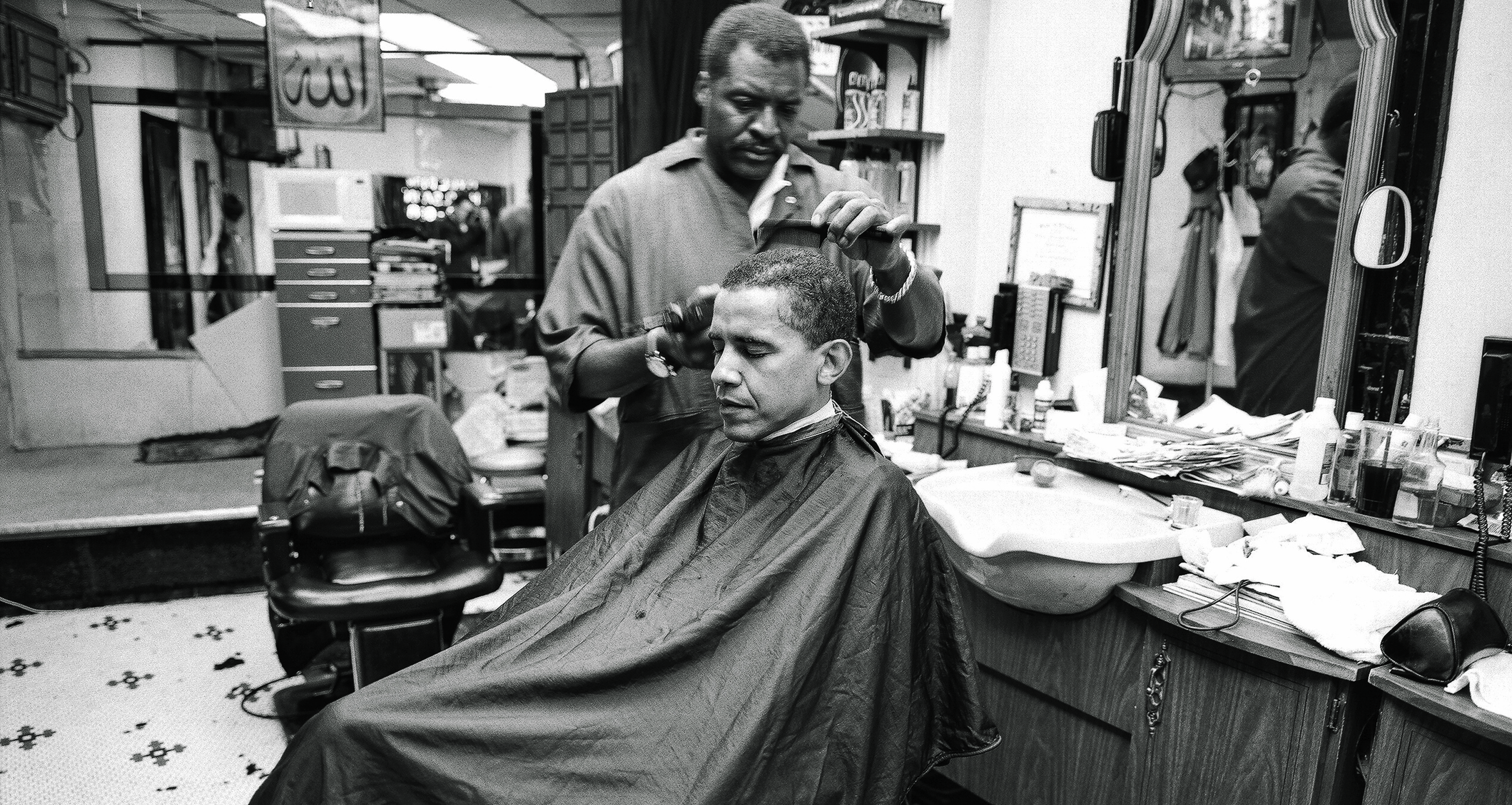 During his 2004 Senate campaign, Barack Obama gets a haircut from James Zariff Smith. Photo by David Katz from Barack Before Obama

Barack Before Obama: Life Before the Presidency (Ecco/HarperCollins, Dec. 1) is a visually arresting collection of photos that illustrate Obama’s trajectory from state politician to U.S. president. After college in 2004, David Katz spent months on the road with Obama and his team, serving as official photographer—and driver, aide, confidant, coordinator, and a host of other roles. After Katz graduated from Stanford Business School, the campaign brought him back to serve as the photographer for Obama’s 2008 presidential run. Our starred review called this beautiful book “a brilliantly photographed tribute to the rise of the 44th president.” I spoke to Katz via Zoom; the conversation has been edited for length and clarity.

When you started, did you have a sense of how high Obama could rise?

If I told you that I thought he was going to be president, I would be lying. When I joined him, he was in third place in the Democratic primary. In addition to photographing him, I drove him around the state for campaign events, so we spent a lot of time together in the car. At one point, I told him, “Someday, Ken Burns is going to do a documentary on you.” And he said, “Don’t be ridiculous. Ken Burns does documentaries on the Civil War. He does documentaries on baseball. He’s not going to do a documentary on me.” He was completely flabbergasted that I said something like that.

Tell me about the genesis of your position.

I was the photo editor of the University of Michigan newspaper, and after college, I was trying to figure out what I wanted to do: Photography was one route, or politics, or something in the newspaper business. It just so happened that Obama’s campaign was ramping up, and I wondered how I could contribute immediately. Looking at the website and the photos, I thought I could improve it right away. In January 2004, I went to the campaign office and was introduced to the manager, Jim Cauley. He liked my portfolio, offered me a volunteer role due to cash constraints, but said that if they won the primaries in March, he would hire me to be the campaign photographer.

At the beginning, you attended one of Obama’s speeches at a church, and you were struck by his ability to connect with a variety of generations and people of different backgrounds. Can you elaborate?

From the very beginning, I observed that he had a unique ability to talk to multiple generations and have it ring true. To see him in that environment—where he had different age groups in one place and was able to address their needs without alienating another group and really get them together around a few core values—that was unique and special. I’ve seen him give graduation speeches, sobering messages to young folks about the level of competition out there and the need to stay focused, and I’ve seen him give heartfelt speeches to seniors about challenges they face in their golden years. That ability to speak to such a wide variety of experiences drew me to him. Of course, everyone talks about how he connects across race. I’m half Chinese American and half Caucasian, so we shared a little of that connection—how we’re constantly having to code-switch or fit into different environments depending on the circumstance. He’s a natural at that. Obviously, there’s tons of pictures of him energizing young people, but I didn’t want people to forget that he had a strong connection to the older population as well.

His engaged demeanor feels authentic. Is that intuitive to him or something you and your colleagues had to consistently emphasize?

It comes natural to him. I included a quote by David Plouffe [Obama’s 2008 presidential campaign manager] about how Obama actually enjoys talking to people and listening to them. Plouffe said that most politicians are waiting until people stop talking so they can talk again, but Obama was actually interested in those conversations. That’s an important word, authenticity, and it came through with folks. They felt like they could trust him, and even though they may have had policy differences, they could respect him as a person, that they would be heard and taken into consideration. That comfort level is something I wanted to show.

Take me through your process of capturing a political candidate in such a wide variety of settings, from personal to professional. How do you navigate that?

David Katz He was remarkable at not getting distracted by a camera. There was only one time when he didn’t want me shooting: November 2004, the night he was elected as a senator and was preparing his speech for his supporters. He scolded me that one time. But I think the best political photographs come through when people don’t know that you’re there. During election night in 2008, I was literally lying sideways under the TV as they’re watching the results. No one in his family is looking at me; obviously, they’re looking at the TV, but I hope what comes through to readers is how they are feeling at that moment, that it just jumps off the page. Political photography is not just about the technical aspects and taking the picture. It’s about having a personal relationship strong enough that you almost blend in as a member of the family.

I can imagine it takes some time to develop that kind of comfort level.

Exactly, that’s a great point. Remember, we spent six out of seven days per week, 12 to 14 hours per day, campaigning outside of Chicago. We could do four to six events each day, and then we might drive five hours back to Chicago for a campaign fundraiser at 9 p.m. It was very hectic, and it was often just me, so we got a lot of one-on-one time.

Tell me about some of your favorite photos. Early on in the book, you point out a significant moment between Obama and his barber.

Yes, the barbershop one. I’ll just add one little bit on that. I actually grew up in that neighborhood in Hyde Park, and though this wasn’t my barbershop, I walked by this place all the time. The other special thing is that Zariff, the barber, would open the shop late at night because we were campaigning all day. Which meant we had an empty barbershop, and you rarely see that—so maybe his guard was let down a little bit.

Another series of photos I cherish is the one with Robin Williams and Stevie Wonder with Obama after a fundraising event. In one photo, Robin is doing an impersonation of Stevie, and it was just one of those great memories. And Williams’ son gave me a quote—“Three people at the top of their profession just being normal, joking around”—which I thought was a nice unguarded moment. The party was particularly meaningful for the Obamas because I think Stevie played a song that they heard on their first date. I left around midnight, and 40 minutes later, he played a concert for the 20 people who were left for another two hours.

Tell me about the timeline after Obama became president in 2008.

I worked in the administration for the first term, for the secretary of energy, and in the White House on the National Economic Council. Then I came back to California and have been in the business world ever since. I still see President Obama fairly frequently to play golf, and he is focused on his work with his foundation.