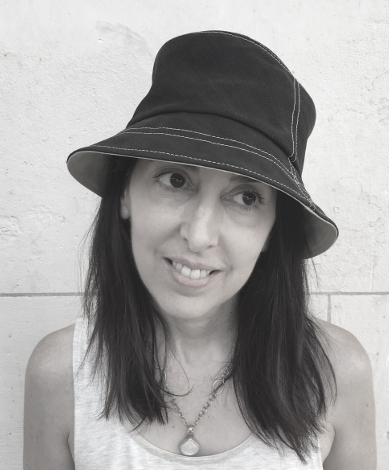 Deb Olin Unferth’s quirky-funny-brilliant collection, Wait Till You See Me Dance, features 39 short (and shorter) stories on the absurdity and magnificence of everyday life. And they give the impression—I mean, they at times make you wonder if—they’re directly drawn from her life.

“She doesn’t have any skills,” Unferth writes in “My Daughter Debbie,” a story narrated by a lovingly exasperated mother. “While she was growing up, I always encouraged her to learn how to do something. I told her she should become an X-ray technician. Then she would always have work and she could pursue her hobbies on the weekend. She did philosophy in college and I said she could be an X-ray technician and still read her philosophy books and have a good paycheck and a skill she could move around with, because she likes to move. I never saw anyone move so much.”

Unferth is the author of the story collection Minor Robberies; the novel Vacation, winner of the Cabell First Novel Award; and the memoir Revolution: The Year I Fell in Love and Went to Join the War, finalist for a 2012 National Book Critics Circle Award. Her work has appeared in Harper’s, The New York Times, McSweeney’s, Esquire, and The Boston Review; she won three Pushcart Prizes. She is an associate professor at UT-Austin’s Michener Center and the New Writers Program, and developed a two-year creative writing program for inmates at Texas state maximum security prison.

“In that story, ‘My Daughter Debbie,’ that is my mom’s voice,” says Unferth, who Kirkus reached by phone at home in Austin. “I wouldn’t publish it as a memoir because it’s not all she is—she’s a bigger, deeper person—but I don’t think there’s anything in there that she didn’t say.”

The stories in Wait Till You See Me Dance make ample use of personal experience: five years as an adjunct professor, an on-again-off-again relationship with a former boyfriend, a high-stakes job interview, extensive travels throughout South America—to name just a few. Nevertheless, Unferth maintains strictly distinct approaches to writing memoir and fiction.

“In the memoir [Revolution], I tried to be as precisely accurate at as I possibly could,” says Unferth, whose research included combing her old journals and steeping herself in Nicaraguan history, politics, and liberation theology. “With fiction, so much for me is about form and structure and building tensions—the content of course is super important, but I also want to create a certain effect.”

“It’s freeing to exaggerate for further effect,” she says, “to my own wild delight.”

One example is the titular story—from the experience of teaching at a specific Midwestern school (a place so recognizably rendered that, when the story was published, she says, she received emails like: “‘I know exactly the building you’re talking about! I was an adjunct there! It was horrible!”). There, Unferth had a student from a war-torn country who would have lost his visa had he not passed her class.

“But he passed!” Unferth says. “So that’s what happened. But [for the story] I had to imagine, what if I thought he wasn’t going to pass the class? Why would I fight to get that kid passed? What if I was feeling kind of in love with him? But why in the world would I be in love with someone [like him]?! Well, what if I thought of him as this great, unrecognized artist?”

And what if she needed a coworker’s compliance to change his grade?

“I had to invent this [other] person who could save this kid, who didn’t want to save the kid,” she says. “What could I do to convince that person? I’ll throw them in a hole! It just got crazier and crazier and then I had to think, how can I up the ante even more?”

(Answer: make the adjunct (kind of) a witch, with the ability to look into people’s faces and tell how long their lives will be. “I know when people will die,” she writes. “I meet them, I can look into their faces and see if they have long to last. It’s like having a knack for math or a green thumb, both of which I also have. People wear their health on their faces.”)

Ultimately, the carefully constructed worlds of Wait Till You See Me Dance point toward an empathetic tenet by which Unferth, a vegan, has always lived her life: that we have a responsibility to care for and about beings outside ourselves.

“In a lot of the stories, people are trying to help someone, often someone who’s not related to them,” Unferth says. “Our culture encourages us to think of ourselves as these small units ... but I feel like our actual responsibility is so much bigger than that. I don’t know if that’s a philosophy, but it’s important to me.”