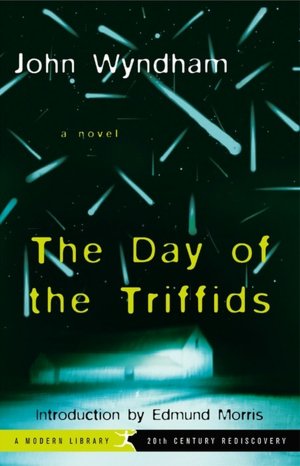 Science fiction often gets a bad rap for using hard-to-understand terms. Well...OK, guilty as charged. But just because science fiction has an occasional tendency to use complex language doesn't mean that it's impossible to understand—especially when you have the following glossary at the ready the next time you pick up a science-fiction book from the shelf.

In Part 1 and Part 2, we looked at scientific terms. Here, we look at words and phrases that are less scientific, but whose meanings are illuminated with a brief explanation.

What's so cozy about the end of the world? A so-called cozy catastrophe is a disaster or postapocalyptic story where the focus is not on the end of civilization, but rather on the characters who, no longer constrained by society's rules, may take advantage of it. It's "cozy" because the characters are usually not in any real danger from the destruction suffered by others.

RECOMMENDED READING: The Day of the Triffids by John Wyndham is nothing like the cheesy 1962 monster flick. Instead, this excellent classic is an unsettling depiction of the few survivors still left after a meteorite shower renders most of the world's population blind.

A pod person is not a real person, but an exact duplicate of that person generated by an alien plant-like lifeform. The process of creating a pod person kills the original, and the duplicate is programmed by the alien lifeform to do their bidding.

RECOMMENDED READING: Jack Finney's alien invasion story Invasion of the Body Snatchers (originally titled Body Snatchers, but renamed to coincide with film adaptations) features aliens that replicate humans as a means of conquest. The book, written during the Cold War, plays off the theme of Communist paranoia.

A "redshirt" is a fictional throwaway character whose main purpose is usually to be killed. The term originates from the classic television show Star Trek, specifically after the red shirts usually worn by the crewmembers who beamed down to a new planet to meet an untimely demise almost immediately. The term has since become something of a in-joke.

RECOMMENDED READING: The aptly-named Redshirts by John Scalzi pokes good-natured fun at the tropes that TV SciFi (particularly Star Trek) often employ that usually fly in the face of logic when put under the microscope of the discerning viewer.

A space marine is exactly what it sounds like, a marine in space. The only difference is that these marines travel in space to fight on alien worlds and use high-tech weaponry to accomplish their mission goals. Space marines can be found in the pages of military science fiction.

RECOMMENDED READING: The classic Starship Troopers by Robert A. Heinlein and the recent An Officer's Duty by Jean Johnson both feature space combatants on alien worlds.

A thoughtcrime is any thought deemed by an oppressive government to be criminal. These thoughts usually fall under the categories of unorthodox or (surprise!) anti-government.

RECOMMENDED READING: In Nineteen Eighty-Four by George Orwell, "Big Brother" did not take too kindly to thoughtcrimes and used mind control to keep its citizens in check.

Uplifting is the process of turning a nonsentient species into a sentient one. This artificial leap in evolution is usually achieved through the application of genetic engineering.

RECOMMENDED READING: Sundiver by David Brin (the start of his Uplift series) posits an intergalactic civilization where all intelligent species (except the originating one) were created thanks to the uplifting efforts of "patrons" to whom the species is indentured for millennia.

RECOMMENDED READING: vN: The First Machine Dynasty by Madeline Ashby features a protagonist that is actually a Von Neumann Machine.

A zombie is person that has been reanimated after death, usually harboring the single-minded goal of killing humans who are still alive. Although there are many reasons given to explain the cause of zombiism (viruses, chemicals, disease, witchcraft, etc.) they are mostly hand-waving and are not meant to be scrutinized. The zombie scenario simply adds another layer in which to tell diverse and original stories.

RECOMMENDED READING: Two recent zombie releases will get you started: Even White Trash Zombies Get the Blues by Diana Rowland and the short story anthology 21st Century Dead edited by Christopher Golden.

John DeNardo is the editor of SF Signal, a Hugo-nominated group science-fiction and fantasy blog featuring news, reviews and interviews. He also like bagels.