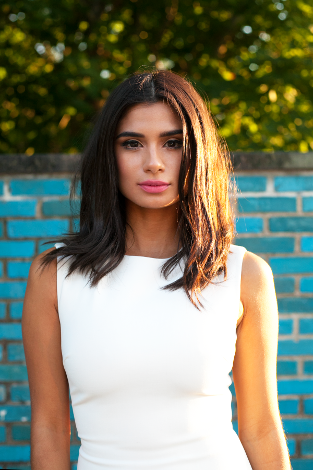 “Deported. Long before I fully understood what that word meant, I’d learned to dread it,” Guerrero writes in her debut memoir, In the Country We Love: My Family Divided. “With every ring of my family’s doorbell, with every police car passing on the street, a horrifying possibility hung in the air: My parents might one day be sent back to Colombia. That fear permeated every part of my childhood.”

In the Country We Love is the poignant, candid, and often shocking account of the challenges Guerrero faced as a citizen child of undocumented immigrants. Her parents, Maria and Hector, entered the United States legally, in 1991, but overstayed their 90-day visitor visa for a chance at a higher standard of living than their native country could provide.

“This is America!” Guerrero says over lunch in Midtown Manhattan, near the studio where she’s recording her memoir’s audiobook. “You can make something out of nothing. I’ve done it! Billions of people have done it! I see new jobs every day on social media—I’m like, how is this person making a living out of this?—but you can! There are a lot of obvious kinks in the system, but, regardless of all of that, this is a great place to be.”

Guerrero is a natural entertainer, funny and vivacious, who occasionally slips into accents or bursts into song. She was born July 21, 1986, in New Jersey—a fact that guaranteed her American citizenship under the 14th Amendment, despite her parents’ immigration status. The family soon moved to Boston, where her parents toiled at multiple low-wage jobs: cleaning office buildings, babysitting, factory work, dishwashing. They spent thousands of dollars and decades trying to forge a path to citizenship.

Then, one spring day in 2001, without warning, they were gone: their 14-year-old daughter returned to an empty house.

“My family suffered through a great trauma. I still wake up screaming, sometimes, calling out my mother’s name, and I’ll be 30 in July,” she says. “I’m sure lots and lots of other families are going through this, but I feel like the story is rarely told.

“Growing up, I never heard citizen children of undocumented immigrants speak out—kids who were left behind and their struggles with the immigration system,” she continues. “I would’ve loved for someone to share that story long ago. Maybe I wouldn’t have gone through some of the challenges I’ve had to face.”

On the day her parents disappeared, Guerrero, panicked and terrified, hid under the bed with a cordless phone until a family friend could come rescue her. Her mother and father were en route to separate prisons in New Hampshire; the neighbors, who’d seen them led away, were en route to pillage their refrigerator:

“ ‘What are you doing?’ I asked one of the women [who entered the house]. She was standing in front of our open fridge with a large plastic bag in her hand. It appeared she was packing up our fruits and vegetables.

“ ‘Your parents won’t need this food anymore,’ she snapped. ‘We might as well take it.’ ”

It was in that moment that Guerrero felt most alone, she writes. As far as the federal government demonstrated, she was: “When the authorities made the choice to detain my parents, no one bothered to check that a young girl, a minor, a citizen of this country, would be left without a family. Without a home. Without a way to move forward,” she writes.

Fortunately, Guerrero was taken in by family friends and was able to finish her education at Boston Arts Academy, a Fame-like high school for budding performers. Fearful of the perceptions of others and possible repercussions, she shared her story with no one. When asked about her parents by teachers, friends—and, later, interviewers—she said they lived abroad. Sometimes she said they were dead.

“The anxiety and the hurt of living [in the shadows] seeped into my being,” Guerrero says. In college, she struggled with her studies and finances. Self-loathing led to self-medication, excessive drinking and partying, deep depression, cutting, and contemplating suicide. She avoided calls from creditors and her parents alike.

“That was hard to share, because I always wanted to keep the ‘good girl’ image of myself alive,” she says. “I remember having to stay with all of these families in high school. I really tried to be quiet and good and wanted to show them that they didn’t make a mistake in taking me in and that I appreciated them—and I do, so much. So when speaking about some of my issues, like my mental health, I felt like I was going to disappoint everyone who’s helped me along the way.

With featured roles on smash series OITNB and the CW’s Jane the Virgin, Guerrero’s career is an inarguable success; and it is through that success that she found the strength to share her story with the world. On Nov. 17, 2014, Guerrero revealed her status as the child of deported parents in a Los Angeles Times op-ed, followed by an emotional interview on CNN’s New Day.

“I did it because I couldn’t breathe anymore,” she says. “I couldn’t be myself in the path I was taking, in this career of wanting to express myself and wanting to be an artist. When an artist can’t fully be themselves, what kind of art are they producing? People ask questions all the time, for interviews—tell me about your life! I could sit there lying to them, or just omitting so much, or I could tell the truth.”

Through In the Country We Love and her volunteer work for the Immigrant Legal Resource Center, Guerrero will continue to share her family’s story in the hope of inspiring immigration reform.

“Not another mother or father should be torn away from their loved ones—nor should a child be left trembling beneath a bed,” she writes.

Her mother currently lives in Spain; her father stayed in Colombia. But Guerrero dreams of bringing them back to the United States one day, legally and permanently.

Today, there are over 11 million undocumented workers in the United States—taxpayers who contribute $15 billion to Social Security a year—and, according to Gallup, 87 percent of citizens believe they should have a pathway to citizenship. Guerrero encourages readers to educate and engage themselves in the political process to effect change.

“For any person who’s felt like they weren’t important, or their story wasn’t good enough or their struggle wasn’t valid,” Guerrero says, “the main thing is to know that you have a purpose in life, your story is worthy, you should share it, and you should use it to help others who are in the same position be informed of the issues—both sides of the issues.

“You are a political human being,” she says. “Just because you feel like there are other people who are more informed doesn’t mean you can’t weigh in. That’s what I’ve learned: inform yourself.”