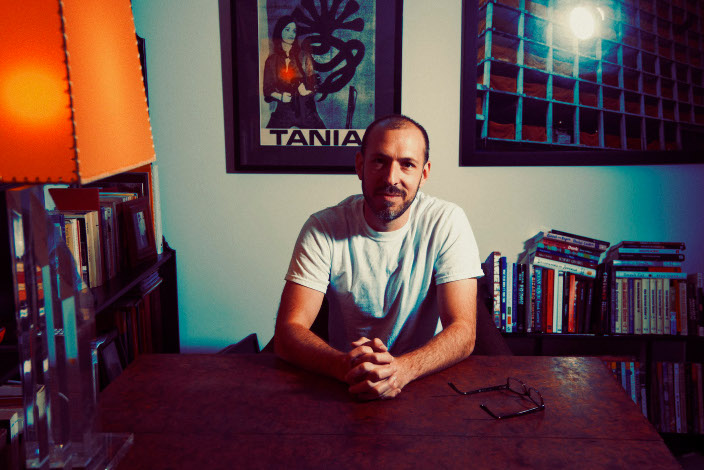 The gay bar is a sanctuary, we’re often reminded in the wake of the massacre in Orlando, a presumably inviolable place. Gay bars like Pulse are thumping, conspicuous, fearless; but there exists another kind of sanctuary for men who sleep with men, one subterranean, much lesser-known, and built on fear. It’s all dark hallways, cramped cubbies, anonymous faces, hushed voices, and sticky floors. And it isn’t the bathhouse; that’s far too gay. It’s the arcade—that red-lit labyrinth of tiny video stalls flanking the main floors of some XXX shops—and it is the choice sanctuary for deeply closeted men like Sam, the obsessive, sexually charged narrator in Drew Nellins Smith’s debut novel, Arcade.

It’s easy to wonder why in a post-marriage-equality world there’d be anyone so threatened by his own same-sex attraction that he’d feel the need to skulk through a place like the arcade, where, Sam tells the reader, “you could do something small on the outskirts of town that no one knew about but you.” But then again it would be naive to think Obergefell stamped out bigotry overnight, or suddenly liberated sexually repressed, desperate men who’d already built shiny, married-with-kids lives in the suburbs—a perfect target market for the arcade.

Sam doesn’t have a wife or kids, but he shares with the arcade’s clientele a fixation on the trappings of masculinity and certain brands of ostensible straightness: beards, bikes, blue-collar jobs, muddy boots, pickup trucks, wives. “The longer I was in a booth with some repressed, self-hating man in Wrangler jeans with the gold band on his left hand,” Sam confesses, “the more I wanted him.” Lisps, limp wrists, lightness in the loafers—already met with enough derision in the “masc4masc” precincts of mainstream gay dating—are boner killers in the arcade. “Dude,” “bro,” and “man” as direct addresses are the likely shibboleths here. But “gurl,” “hunty,” “mama”? Access denied.

How does a man have gay sex—a lot of it, not just experimentally and not just for cash—yet continue to identify as straight? Is cognitive dissonance that potent a drug? Are some men just that inherently good at quarantining their carnal inner lives from their romantic, straight-washed public ones? Is fear of thwarted societal expectations just that motivating a factor? Or is it that the arcade’s men actively resist categorization, binaries, gay-community assimilation, or typical heterosexual notions of marital-bliss monogamy?

There are no clear-cut answers, but luckily for us, Sam—when he’s not stalking a cop who’s rejected him, sorta kinda coming out to friends via spectacularly awkward dinner conversations (“I’m not really gay or whatever, but…I’ve fallen in love with a guy,” he says), or obsessing over being surveilled—spends a lot of time in the arcade, and, like a naturalist in the wild, develops a knack for profiling his environment’s inhabitants. “An incredible percentage of arcade goers were married or lived with women,” he explains. “Some of the men there genuinely were straight—not perfect ‘zeros’ on the Kinsey Scale, of course—but were unable to have their appetites met by their wives and girlfriends.” Or take this description of a man Sam meets online, who isn’t an arcade goer but is of similar ilk: “What he really wanted was a buddy, a friend with whom he could hang out and go golfing and camping and fishing and to sporting events, and of course with whom he could privately have sex because, as all of them will tell you, they prefer women, but there’s just something about playing with another guy. Not better, just different.”

The bottom line: “Whatever their actual orientations,” Sam says, “unlike in the gay community at large, most of the men at the arcade were trying their best to appear unmistakably straight.” Smith’s own research for Arcade seems to concur: “I placed ads on Craigslist to ask people to talk to me about their real experience at the arcade,” he says. “Almost every respondent was married to a woman and referred to themselves as straight.” And some, he adds, reported they just didn’t like to label themselves.

Some of Smith’s book research wasn’t exactly secondary—no surprise, readers expect a measure of autobiography in first novels—and thank goodness for that: it’s difficult to imagine a book as vivid, sexually frank, unflinching, and poignant as Arcade coming from an author who hadn’t to some degree been there, done that. “There’s so much of my life that is mixed in there,” Smith says of the book, but on the other hand—his mother might very well read this, he adds—“so much of the book is completely invented.” He’s resigned himself: “I really have to just accept it and say, ‘Okay, well, people can think of me whatever they want.’ ”

And what about the arcade’s future in a world of increasing LGBT acceptance? “I think those places are important,” Smith says. “For me, the arcade was, in a very weird way, an important part of my development and my self-acceptance and just gradually coming into my own. It was a life raft for me.” There’s a bit of theater to the arcade world, after all, a sort of drag, even: not men who dress as women, but rather gay, bi, or at the very least gay-ish men who dress as straight. Even in a hypothetical world of 100 percent understanding and acceptance and freedom, for many there’s something appealing about the forbidden, the taboo, even if it’s in pantomime. And for that reason, it’s not hard to understand why, Smith says, “cruising culture is here to stay.”

Matthew Patin is a book editor and a board member at Austin Bat Cave, a nonprofit writing center for kids and teens.