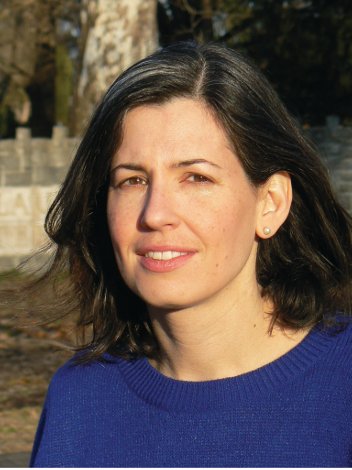 In Elisabeth Cohen’s clever debut, The Glitch, a Silicon Valley executive finds her perfectly optimized life derailed when she meets...herself? Shelley Stone is the CEO of Conch, a wearable tech company that sells a device that sits behind your ear and does everything from playing your favorite music to monitoring your heart rate to giving you directions. It’s the hottest thing on the market, due in no small part to Shelley’s stellar leadership. She’s famous for her Ted talks about how she changed her life after being struck by lightning as a young woman, an experience that, Cohen hints, might have rewired her brain a bit to make her the fanatically driven and work-oriented person she is now.

But was there more to the lightning strike than a freak accident? Almost 20 years later, Shelley meets a woman, Michelle, who claims to be a younger, pre-lightening version of Shelley. Sure, it sounds crazy, but Michelle has the same scar, the same childhood memories, and the resemblance is uncanny. Is Shelley’s untenable workaholic lifestyle finally taking its toll on her mind, or is something more magical going on?

While the mystery of Michelle’s identity is central to the novel, it’s only one part of an impressive story that is part thriller, part mystery, part feminist social critique, and part biting satire. Cohen started out writing a novel about encountering a younger self in a more metaphorical sense, but when the book wasn’t quite coming together, she looked to pop culture. “I was noticing all this woman-CEO stuff,” she says, referencing things like Yahoo executive Marissa Mayer’s Vogue photo shoot, Lean In, and a widely-read essay in the Atlantic by Anne-Marie Slaughter deconstructing all the ways in which our society is set up to keep female ambition fenced in.

“That article was hugely discussed in my social circle,” she says. Cohen had a lot of “unresolved feelings” about the article. She started thinking about the “odd cultural prominence” of women like Slaughter since the conversation about them isn’t “really ultimately about whether they’re good CEOs.” That’s when her husband told her she should write about women CEOs. “And I thought, ‘Yeah, I would read that book, I don’t know how I would write about it but that’s the book I would want to read.’ Unless I’m missing them, there aren’t that many books about women with hard power.”

Shelley has hard power in spades, along with all the sleepless nights, working vacations, and public scrutiny that goes with it. Cohen’s satirical depiction of Silicon Valley culture is both funny and disturbing. Shelley is proud of Conch’s many employee perks, like yoga classes out on the grassy campus and a ridiculously lavish cafeteria, but notes that the truly dedicated would never dare leave their desks to take advantage of them. Shelley, who takes a men’s multivitamin as a feminist statement, has mixed feelings about her young daughter’s attraction to the new pink-colored Conches, but notes that young girls are subjected to an onslaught of pink from birth and it’s hard to show them other options.

And of course there’s the Conch itself, a device that is both attractive and terrifying, innovative and useless. Shelley is the Conch’s biggest advocate, and yet she really only uses it to read her emails and texts. It’s such a close parody of real life wearable tech, Cohen worried that her fictional device would become a reality before the book finally came out. “I knew I wanted to write a book that involves tech but where the tech was much more the way tech is in my life,” she says. Cohen has an iPhone but Siri has “never once been able to help me with anything, she can’t pronounce the name of my town,” she says. “Tech is sort of interesting or funny or has possibilities, but then ultimately its value is unclear.”