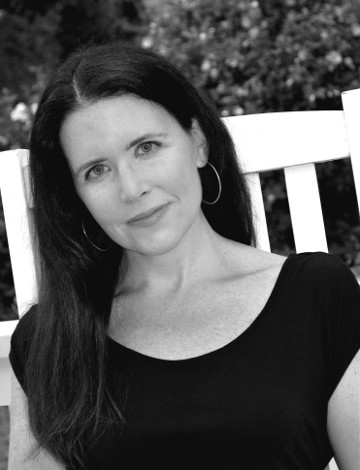 Elise Juska has tacked a copy of W.S.Merwin’s poem “To the Book” to her study wall—a reminder that the writer has an obligation to her work, or as the poet says, “…that the fault was all mine.” She has taken that commitment to heart, writing in isolation during the summer months in Maine, then editing her own work during the academic year while teaching fiction at the University of the Arts in Philadelphia. Juska is thoroughly a writer. ‘I am not good at relaxing,” she says, “but want to work every minute.” Her teaching reinforces that urge. Guiding students through their daily discoveries inspires her further and sends her home to mine new ideas.

The Blessings is Juska’s fourth novel, one she feels she has been writing for a good 20 years. It is the story of place and family, in this case an Irish-Catholic family named Blessing, in a time span from 1992 to the present. She has published an extensive catalogue of short fiction in literary journals over the years of her career and sees The Blessings as a novel in individual stories, forming each chapter to stand on its own in the progression of the whole.

“I wanted to get the sense of relationship of the individual to the clan, the rhythm of the big, extended family,” she says. So the structure created itself—each chapter focused on a family member, chronologically tying together the evolution of a family. The book is how they fit, how they see and interact with each other. That approach allowed Juska to explore “moments” and the “economy of vignettes” within the larger picture of how the collective family works with the challenges of modern life: “Great Acts. Is that how they saw it? These things aren’t great. It is what you did, what family did,” she writes.

The fabric of Philadelphia is woven into the book. Juska grew up there and was a voracious reader and writer as a child. “I had my father’s old typewriter from college and I would bang out stories one by one. In retrospect I was writing or rewriting the stories I was reading at the time.” Her mother kept playtime with friends to an hour so Elise could go back to writing, where she interacted with her “imaginary friends.” The characters in her stories and novels now always surprise her. They appear and form and do things on the page that she could not have imagined, letting the magic of the process occur. “There is a scene in the novel where Stephen punches an old man. It shocked me,” she says. “I was just not expecting something like that.”

Her annual writing months on an island in Maine, almost totally isolated, allow for purely creative time. The agenda is set: 5:00 or 6:00 AM rise and write until 4:00 PM. Then out for a hike and back writing more into the evening. “I need to schedule one time a week to go out and meet with another human being.” This is the process she describes as “joyous.”

The spark of The Blessings that tapped into a 20-year font of this family percolating within was in a short story discussion group she attends with other novelists in the Philadelphia area. They were reading James Joyce’s “The Dead” when something clicked and she had her first character sitting in a dorm room in 1992. “It didn’t take long for Abby to discover at college that most people did not have families like hers.” So begins the novel. And as we read through the individual character’s perspectives, the family members come alive, from Abby, that college freshman, to the stoic matriarch Helen, with aunts and uncles, cousins, sisters, all shouldering the load of strife, illness, success, births and funerals. We realize that yes, this is a closely knit family that knows much too much of each other’s business. In other words, it is any family.

Juska realizes that the little girl who sat in her room writing, though extremely happy and playful with her real school friends, was quite shy, and that is a disconnect from the very public world of publishing. Here you let it all out for critics to pounce and attend public readings on book tours that were nerve-wracking at first for Juska. She is more comfortable with it now and at work on another new novel and a collection of stories that will only bring her inner thoughts directly to the light of public scrutiny once again.  Regarding the creations she calls the Blessings, “I would love to see them all again. Have them go on and discover what happened in their lives,” she says. When I ask if there is any one of them that she would not like to meet at a party or a book signing she does not hesitate: “No, I really like them all,” she says.

Pete Warzel is a writer in Santa Fe, New Mexico.