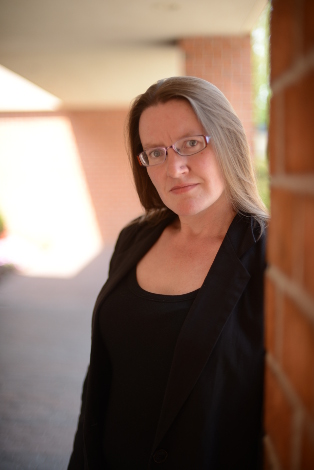 Elizabeth Bear’s epic space opera, Ancestral Night, has everything: pirates, far-future tech, strange alien species, amazing ships, and sentient AIs. You can feel her love of the genre and her enthusiasm for the story on every page. A lifelong fan of science fiction and fantasy, Bear jumped at the chance to write a space opera and says the hardest thing about it was keeping all the ideas she wanted to use limited to what would fit in one book; and this book is almost 500 pages long!

Bear cites C.J. Cherryh and Andre Norton as influences, particularly their ideas of deep time and space-faring civilizations that have been around for so long that there could be such a thing as deep space archaeology. To describe it too much would be to spoil the story, but suffice it to say that when an ancient technology is discovered, everyone from galactic governments to pirates might want to get their hands on it. Engineer Haimey Dz finds herself at the center of this conflict when she stumbles across a strange alien parasite that merges with her body in confusing and fascinating ways.

Haimey runs a salvage tug with her business partner, Connla Kuruscz, an AI called Singer, and a couple of cats who are surprisingly adept at navigating in zero gravity. And they aren’t the only ones. Working and living primarily without gravity obviously makes a big difference in how one’s body functions, and in a far-future setting, the body can be modified for zero-gravity optimization. For example, Haimey has “aft-hands”—quite literally, hands for feet.

If that idea makes you a little queasy, you aren’t the only one. There are subcultures in Bear’s world that find any practice of modification morally repugnant, but there are others who think it’s unreasonable to live any other way. Haimey even has tech in her body that can regulate her very emotions, and it’s so effective that she’s been able to, quite literally, flip off her sexuality. Which comes in handy when she keeps running afoul of a particularly alluring pirate who taps right into Haimey’s weakness for bad girls.

The level of technological advancement results in a culture that may seem far removed from our own, but when it comes to the human race, wherever we go, there we are: Even if Haimey’s world has evolved past the kinds of strict gender roles we have now, our times have not been forgotten. There is a scene toward the beginning of the novel in which Haimey, trying to kill time on a long trip, is reading lengthy British classics like Jane Eyre. She reflects on how sad it must have been for people to be locked into a specific and strict way of living and behaving purely because of their anatomy.

“One of the things for me that is fascinating is how constructed our ideas are of what gender and identity are, how based they are in our cultural assumptions,” says Bear. “[People ignore] the fact that they vary so widely culturally and historically and how much of them have to do with power dynamics.” Inspired by Octavia Butler and the current landscape of neurological study, Bear wondered if it would be possible for humans to engage in cultural growth as a species. And humans have plenty to grow past, but the abandonment of gender essentialism and draconian gender roles in the novel feels particularly good.

In any case, once you run into alien species who may not have any ideas of gender whatsoever, let alone hang-ups about it, it’s harder to pretend that fixed ideas of gender and gender roles make any sense. “Biological sex is crazy enough on Earth,” says Bear, “and then you bring aliens into the mix, what are you even gonna do?”