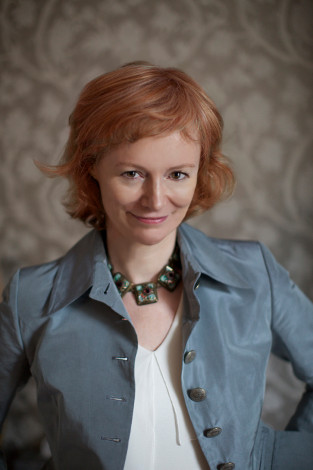 Best-selling romance author Eloisa James is also a Shakespeare scholar and English professor at Fordham University. Many elements of her life read almost like a novel, including her childhood; her marriage to a bonafide Italian knight; and a number of pivotal moments that, like turning points in fiction, moved her story forward in unexpected ways. Born and raised on a farm in Minnesota (real name: Mary Bly), she is the eldest daughter of short story writer and essayist Carol Bly and acclaimed poet and social critic Robert Bly. The family owned 5,000 books and no television, so the four children were great readers and also very creative, putting together puppet shows and plays in their home. Mary remembers being fascinated by romance from an early age, as well as having a strong desire to be a writer. In anticipation of her upcoming book, Three Weeks With Lady X, Eloisa and I had a sparkling phone conversation about romance, literature and life.

I have always been intrigued by love stories. They make me happy. I’m not sure I can exactly explain it, but reading a romance is rather like listening to music. When music moves you, you feel it. You experience a rush of emotion. And like music, there’s an architecture to a romance novel: a structure that underlies the story and carries the reader to the last page. Literary fiction, in my opinion, should make the reader feel unsettled, and challenge the way she thinks about life, perhaps disrupt her sense of equilibrium and well-being. Romance, on the other hand, confirms a promise that there is not only structure in the novel, but in life: that it is possible to have a thoughtful, sensual relationship with a beloved person.

You come from a very literary household. How did your parents respond to your romance career?

Well, let me back up from that a little bit. Before I was an author, I was a reader, and I became a romance reader at a fairly early age, when I discovered romance at the local library (you wouldn’t have found any romance novels on our family’s bookshelves!). My mother was very disapproving, but my father was more accepting. It became a point of fierce yet fun bargaining between us. I was allowed to read a romance novel after I’d read a certain amount of classics. But then I would argue that Harlequins were a lot shorter than, say, a Twain novel, so I’d negotiate an extra one or two considering page length. As my writing career moved along, I generally had the same level of support for my romance writing that I had in my reading. My mother continued to be disapproving, while my father was very proud and supportive.

Why do you think that is?

My parents were very literary people. They met when she was at Wellesley and he was at Harvard. My mother always wanted to be a writer and to marry a writer. She fulfilled those ambitions, but she had a very rigid definition of who could be a writer and what that meant. To her, romances were not literary, and people who wrote them were not truly writers. She basically felt like romances were beneath me, and that I should use my talent to write “real” books. (Carol Bly died in 2007.) My father, on the other hand, was a renowned poet and essayist. He won the National Book Award for Poetry, but what he became most known for was his wildly successful book, Iron John, which was considered cultural criticism. Once he’d written that book, his

poetry was often not taken seriously. My father has always been very supportive of me and both of my careers, but what I think his experience taught him was that it is very important not to shame people. Because that’s what happened to him. Literary types ridiculed Iron John and turned against his poetry because he’d written another kind of book. So he is proud of my writing career, but furthermore, he would never belittle anyone for writing or reading romance. (Robert Bly is still alive, but suffers from dementia. He does, however, still recognize Mary.)

So tell us about your romance-hero-worthy Italian knight husband.

Let me first say that I met my Italian knight husband on a blind date at Yale, and he did not want to meet me. He was only interested in a fling, and I had just come off a 10-year relationship, so he assumed I would want something long-term, which would involve his moving to America permanently. I didn’t think I wanted anything substantial, but when I saw him, with his curly dark hair and swimmer’s body, I might have changed my mind. And I guess he did too, because we’re celebrating our 20th anniversary this year. He became a knight a few years ago, after being honored for his services to the Republic due to research and writing on Italian literature. He really couldn’t care less, but I think it is very cool, and as a romance writer, I have a lot of fun with the fact that my husband is an Italian knight, or cavaliere.

Bobbi Dumas writes about the romance genre for NPR and is the founder of ReadARomanceMonth.com. You can also find her and some of her writing colleagues at HowToWriteShop.com, an online writers' resource.