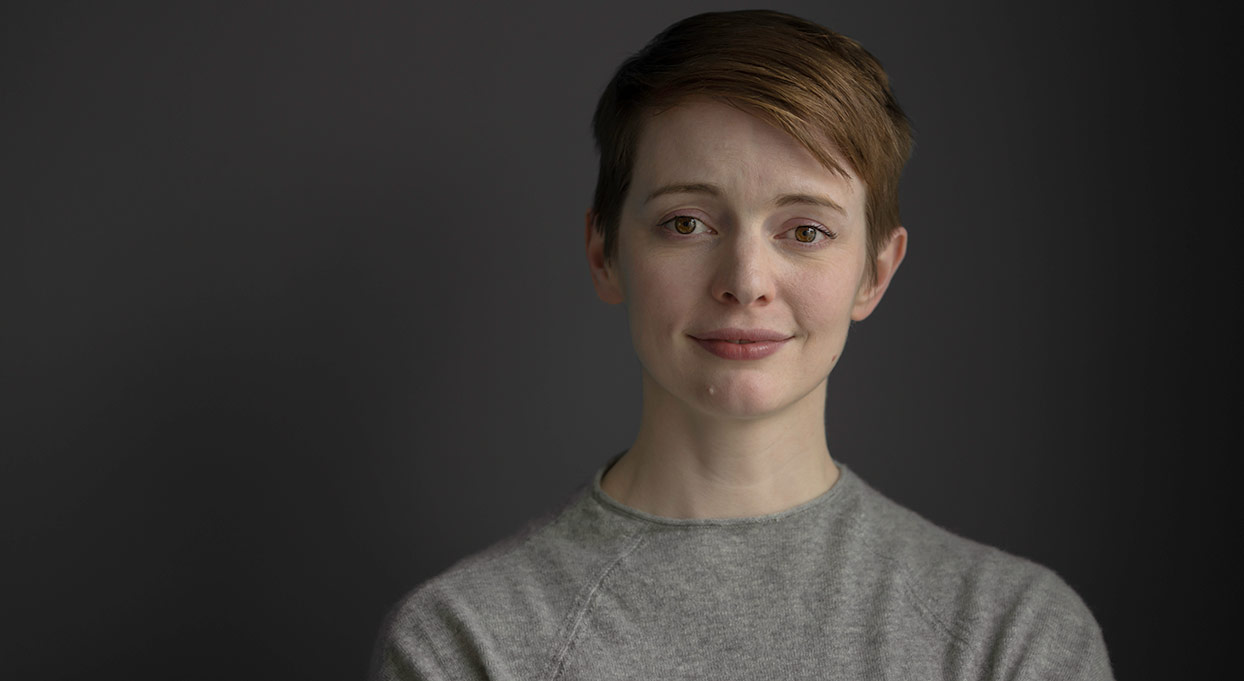 Emily St. John Mandel’s new novel, The Glass Hotel (Knopf, March 24), may dramatize large-scale financial fraud, but it’s definitely not about disgraced financier Bernie Madoff, the author cautions. Instead, a Madoff-like Ponzi scheme provides Mandel a point of departure for a much bigger—and stranger—novel about how the decisions we make affect not just our own lives, but the lives of everyone around us.

“I was fascinated by the Madoff story,” says Mandel. “What interested me about Madoff was that he had a staff who also went to prison. It takes a team to execute a massive financial crime, and I just found myself thinking, Who are these people?”

Mandel’s corrupt financial adviser, Jonathan Alkaitis, also has a team of enablers on his staff. As Alkaitis’ scheme unravels and the feds close in, we hear from his staff in a haunting Greek chorus of guilt, shame, and defensiveness.

But the real heart of this novel lies with Alkaitis’ companion, Vincent, a young bartender and filmmaker invited into Alkaitis’ “kingdom of money.” Unbeknownst to Vincent, Alkaitis’ kingdom is little more than smoke and mirrors.

Alkaitis’ fraud throws Vincent’s life—and the lives of countless others—into chaos. In prison, he is haunted by those who had the most to lose—their money, their reputations, even their lives. “Once I started writing this book, I realized that I always wanted to write a ghost story. It’s just a genre that I love,” says Mandel.

“We tend to think of ghost stories in a classical sense. You know, the hooded luminous specter looming down the hallway in the creepy Victorian mansion,” she says. “But it can be interesting to think about different ways of being haunted.”

“It seems to me every point in our life is some kind of inflection point,” she continues. “You could go one way or the other. We choose A instead of B, B instead of C. But, you know, you make a different decision, and you’re in a completely different life. And I like the idea of our lives being haunted by the ghosts of the lives we didn’t live.”

The kaleidoscopic structure of The Glass Hotel offers glimpses into these ghostly alternate realities, shifting backward and forward in time, in and out of the “real” world of the novel. Major characters recede into the background, and peripheral ones step into the spotlight. Like Station Eleven, it’s not clear how all the narratives will connect until the final pages.

Despite being a relatively fast novel writer, the structural feat of The Glass Hotel took Mandel years to pull off. “With Station Eleven, I had this inherently dramatic premise,” she says. “What if a flu pandemic wipes out most of life on Earth? You plug that into the plot machine and press go. With The Glass Hotel, it took me a really long time to find the heart of the book.”

Mandel also felt pressure to deliver a strong follow-up to Station Eleven, which won the Toronto Book Award and was a finalist for both the National Book Award and the PEN/Faulkner.

“This is the least sympathetic problem in the entire world,” says Mandel, her voice brimming with wry good humor as she describes an “awareness at all times of this invisible audience peering over my shoulder.” Even though Mandel knew her newfound self-consciousness was self-imposed, it slowed the prolific writer down.“People were waiting for this book in a way that they hadn’t been waiting for anything else I’d ever written,” she adds.

As publication day nears, Mandel is still unravelling the intricacies of The Glass Hotel. She’s currently writing the pilot of the TV series, which was picked up by NBCUniversal International Studios. In order to learn more about structuring her story for television, Mandel is working with veteran screenwriter Semi Chellas, who earned two Emmy nominations for her work co-writing episodes of Mad Men.

“Writing for screen, it’s just a completely different level of tension that you need to keep it interesting. Every scene has to have so much going on in it,” says Mandel.

“Another reason I wanted to write the pilot for The Glass Hotel goes back to your very first question about the pressure following Station Eleven,” she adds. “I thought it would be really nice to just be completely distracted by something else, like so distracted I couldn’t think about the book coming out. And, I gotta say, it’s working really well.”

Kristen Evans reviews fiction for Kirkus and writes about culture for BuzzFeed, the Los Angeles Times, the New Republic, NYLON, and others.