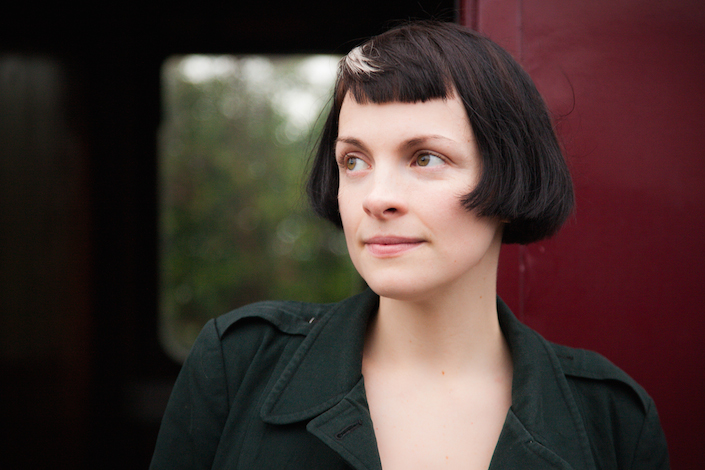 In Hollywood they’re called triple threats—those enviable individuals with so much talent that they not only do one thing and do it very well, they do many things and do them all well. Emma Hooper, with a biography full of commas, is a creative triple threat. She is a musician—a composer, a violin teacher, a viola player who performs as a solo artist and in bands; an academic, a teacher and a researcher in the field of musico-literary studies at Bath Spa University in England; and a writer whose debut novel Etta and Otto and Russell and James has received a Kirkus star.

For Hooper, creative cross-pollination is not just natural but necessary. “I guess it’s kind of like Leonard Cohen, who famously got into music to pay for his writing habits,” says Hooper. “I’ve always done both. Over the last 10 years, music has taken up more of my time, but now the book is coming to the forefront, so it will take over for a while. I’ll always be doing both.”

‘Doing both’ means finding time between lectures and gigs to jot down story ideas and stash them in a cardboard box (a refreshingly old-school way to store information in this era of cloud computing). “If I have an idea of any kind, I’ll throw it in the box,” says Hooper. “Then when I’m looking for things to write about, I go and look in the box.”

A few years ago, the box began brimming with notes centered on a single theme—the story of an old person walking across Canada. Hooper, a native Canadian whose family has lived for generations on the prairies of Saskatchewan, dug in. The result is a wholly original, deeply affecting novel about an 82-year-old woman (Etta) who leaves her Saskatchewan farm, her husband (Otto) and their best friend (Russell) behind to walk 3,232 kilometers east to see the ocean.

Etta’s journey begins as a solitary one, but company soon arrives in the form of a talking coyote (James) and a torrent of memories that whirl in and around Etta’s mind like dust blown across the prairie. As Etta walks, Otto stays behind, puzzling over stained recipe cards, making dots on his globe where he imagines his wife to be and beginning a new project to ward off his sorrow. Russell, whose love for Etta has been an open secret for 60 years, cannot bear the thought of Etta in the wilderness alone and decides to leave his farm for the first time in his life to go  after her.

Hooper’s characters have a noble, plain-spoken stoicism. It’s a hard-scrabble quality Hooper saw in friends and relatives from her rural childhood. “I remember my mother used to tell me, ‘If you pout, then a bird will come and shit on your lip,’ ” she laughs. “We were taught that the best way to get around any problem is to just deal with it and get on wi

th it. The rural Saskatchewan way is this quiet, stoic, on-we-go kind of living.”

The electricity of the novel comes as Etta, Otto and Russell, characters long tethered to the demands and disappointments of everyday life, find themselves suddenly cut loose, liberated by age and time, animated by the magical thinking of memory and stirred by the excitement of one last great adventure.

The musicality of Hooper’s language seduces like a song. A rock is described as “so ocean-smooth it’s almost soft.” The sound of the word toxemia, Etta thinks, “starts so harsh and ends so gently.” The way Russell walked after his tractor accident was “like he was waltzing with himself.”

Hooper’s influence as a musician can be felt in the novel’s feel and structure as well. “I get really hung up on rhythm, how often a word is repeated. I’m very sort of OCD about that,” says Hooper. “Then there’s the white space, which I feel really strongly about. There has to be breathing room, which is a big part of music—the time between movements. Likewise, on the page I think it’s important to have downtime in between your words.”

This downtime—imposed by frequent page breaks—gives the novel an expansive, generous feel echoed in the landscape of the Saskatchewan prairie. And though Hooper admits it was hard to try to channel the openness of the Canadian sky from the low, grey skies of her new home in England, she thinks the book is stronger for the distance. “Being away from Canada helped me identify it more in an objective way. I could storify it.” Still, Hooper goes back to Canada as much as she can to see family and to cross-country ski.

As for Hooper’s next projects, she and her husband, a concert pianist, recently bought an old English schoolhouse (circa 1836) that they plan to turn into a home. Then there is music to compose and perform. There is teaching and research at the university. And there is a new book she is writing, this one set on an island off the coast of Newfoundland. The cardboard box must be getting full again. For Hooper, this is the creative life. “There is always something in the works,” she says.

Kirk Reed Forrester is a freelance writer based in Houston.