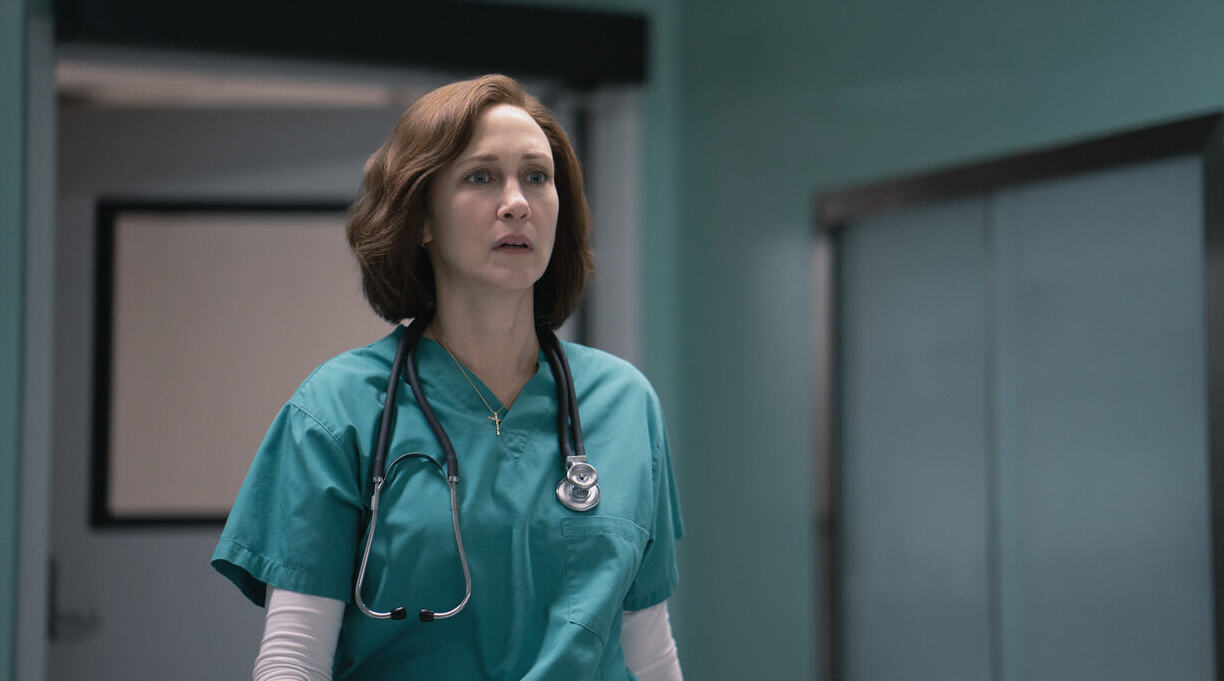 There’s a difference between a disaster movie—something like The Towering Inferno or Armageddon—and a fictionalized version of a real-life disaster. One can freely give oneself over to the excitement and drama of a made-up calamity, as imaginary heroes confront chaos, wreckage, and death. It’s far less easy to enjoy something like Five Days at Memorial, a new miniseries adaptation of Sheri Fink’s Kirkus-starred 2013 nonfiction book about the hellish events that took place at New Orleans’ Memorial Medical Center during and immediately after Hurricane Katrina. It premieres on Apple TV+ on Aug. 12.

The book examines what happened at the healthcare facility from Aug. 28 to Sept. 1, 2005, as the cataclysmic storm and subsequent flooding cut power, rendered backup generators useless, and left patients and staff with limited resources and no air conditioning in brutal heat. As doctors, nurses, and administrators—cut off from communication with the outside world—hoped for boats and helicopters to evacuate them, the most critical patients suffered terribly. More than 40 people died before rescuers arrived, and it was soon alleged that some medical personnel took it upon themselves to euthanize the sickest patients without their or their families’ consent—apparently under the mistaken assumption that they’d have to be left behind. A surgeon, Dr. Anna Pou, who denied any wrongdoing, and two others were arrested on charges of second-degree murder.

Fink’s book draws on hundreds of interviews with medical staff (including Pou), patients and their family members, law enforcement officials, and many others, as it follows the events of the fateful five days, the investigation, and a grand jury proceeding. Along the way, it also delves deeply into the spotty history New Orleans disaster readiness, accounts of similar situations at other hospitals, and the ethics of euthanasia. It’s a comprehensive exploration of the facts of the case, and one that raises intriguing issues, although its resolution may be disappointing for many readers—a long buildup to an anticlimactic conclusion that leaves basic facts about what happened unanswered. This isn’t Fink’s fault; it’s the nature of real-life stories, which don’t follow the rules of drama or cater to audiences’ expectations.

Miniseries are different. They are expected to tell a good story, to heighten drama, to designate heroes and villains. Apple TV+’s Five Days at Memorial attempts to do all these things, with limited success. Each of its first five episodes are devoted to the events of a single day, as conditions worsened, supplies dwindled, and stress and anxiety threatened to overwhelm medical staff. These five installments focus, in large part, on two characters: Pou, played by Vera Farmiga, and the nursing director and head of the hospital’s emergency preparedness committee, Susan Mulderick, portrayed by Cherry Jones. It’s a straightforward and surprisingly unambiguous account of what happened, considering the many contradictory real-life reports from people who were actually there; if any miniseries cries out for a Rashomon-style approach, it’s this one. But the writer/directors of this TV production—Oscar winner John Ridley (12 Years a Slave) and Carlton Cuse—opt instead for one-damn-thing-after-another disaster-movie storytelling, complete with a breathtaking shot of New Orleans being swallowed up as a levee breaks. It also very clearly pins responsibility for what happened on Pou and Mulderick—which makes it all the more confusing when Mulderick disappears from the story.

The remaining three episodes follow the criminal investigation and mainly involve two operatives of the Medicaid Fraud Control Unit: assistant attorney general Arthur “Butch” Schafer (played by the fine character actor Michael Gaston) and special agent Virginia Rider (Happyish’s Molly Hager). The miniseries switches genres at this point, becoming something akin to an extended Law & Order episode—but not a particularly good one. Indeed, the structures of disaster films and police procedurals feel inadequate for telling the story of Hurricane Katrina. It’s a drama that’s simply too big, too horrifying, to be contained by the old tricks of these genres.

Five Days might have worked better if the investigation itself was used a framing device—showing flashbacks of the five days at Memorial from different perspectives as the investigators grill various witnesses. Instead, the miniseries sputters along chronologically, slowing to a stop at the end. Cuse’s mastery of the flashback as the former showrunner of Lost is unfortunately wasted here; so, too, are the talents of the always-brilliant Jones. Farmiga gives an intriguingly chilly performance, but it’s never clear how the writers intend her to be perceived; why spend so much time on Pou’s warm, loving relationship with her supportive husband, for example, only to paint her a clear-cut villain later on?

The most powerful aspect of this work may be its implied criticism of the hospital’s, and the city’s, inadequate disaster preparedness. (Certainly, the stupidity of putting emergency electrical equipment in the basement of a building in a flood zone is made clear enough.) But these issues are dissected far more thoroughly in Fink’s book, which isn’t trying to craft a nail-biting suspense tale of natural disaster at the same time. Some stories simply work better on the page, where one can slow down, take one’s time, and think about what went wrong—without having to deliver a new riff on Twister.