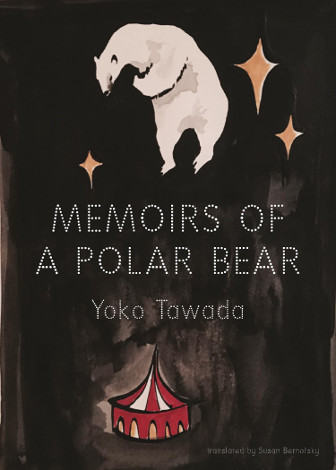 In this quirky novel, Tawada examines alienation, exile, and artistic endeavor through the bears’ lives, which are rooted in the very real contexts of Soviet censorship, East German totalitarianism, the fall of the Berlin Wall, and the Berlin zoo in the 21st century. The perspective of polar bears who talk at political meetings, attend cocktail parties, worry about how pale and flabby they are, and develop close relations with humans is satirical, whimsical, touching, and sometimes-revealing. Born in Japan, Tawada has lived in Germany since the 1980s and writes in both German and Japanese.

Cusk’s Transit is a follow-up to her previous novel Outline (2015) and features the same narrator, Faye, a divorced writer with two sons

who are not with her in either story. In Outline, Faye was teaching a course in creative writing in Greece; here, she is in London renovating a disastrously dilapidated new apartment and dealing with awful downstairs neighbors. She is trying to change her life but is afraid that nothing will change. The novel recounts the stories of those she meets in the everyday course of her life: a Polish builder who is working on the house, the hairdresser who is coloring her hair to disguise the gray, and a student obsessed with an American painter. Writing in the Guardian, Helen Dunmore compared Cusk’s “layering of minute comic and observational touches” to the novels of Evelyn Waugh.

A brutal journey through the 19th-century Argentine wilderness brings Ema, a young mother and captive, to a fort city on the edge of the

civilized world, where she is kept as a concubine. A deft negotiator with considerable seductive powers, she eventually founds a successful pheasant-breeding business. Yet despite the exotic setting and dramatic events, the characters in this novel are a leisurely, lethargic bunch; both Indians and soldiers spend most of their time drinking, smoking, and playing dice. Ema switches easily from one lover to the next with little apparent interest. In a reader’s note at the end, Aira describes his second novel as a reaction against the wildly passionate Gothic novels he was forced to translate as an impecunious young man—it is, by contrast, a study in indifference.

Forget cucumber sandwiches and polite clapping on the village green. Cricket is a global sport; no wonder that the potential for social advancement, wealth, match-fixing scandals, and sponsorship battles accompany it. It is a national craze in India, where a new format,

called Twenty20, has given rise to the Indian Premier League. In the novel Selection Day, the father of two cricketing brothers moves from rural India to Mumbai and takes on an unrewarding job as a chutney seller to focus on ensuring his sons become the No. 1 and No. 2 batsmen in the world. Adiga, whose debut novel won the Man Booker Prize in 2008, investigates how the sport is being corrupted and reflects on social mobility, religion, and sexuality in modern India.

Catherine Hickley is a Berlin-based arts journalist. Her first book, The Munich Art Hoard: Hitler’s Dealer and His Secret Legacy, was published by Thames & Hudson (except in North America) last year.