Froth in a Dangerous Time: An Interview with Michelle Cooper 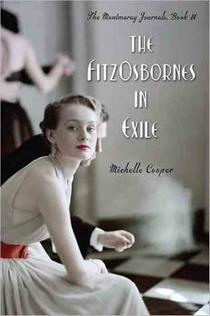 Australian author Michelle Cooper's first book to be published in the United States was A Brief History of Montmaray and took the form of a fictional diary written by the miniscule island kingdom’s Princess Sophie, sister to the heir. Her account is by turns hysterical and tragic as she writes of her family’s increasingly desperate financial straits and the island’s invasion by treasure-hunting Nazis. Its sequel, The FitzOsbornes in Exile, picks up in 1937 after the family's hasty retreat to England and finds Sophie chronicling her wealthy aunt’s increasingly desperate attempts to marry her and her cousin off even as the threat of war looms nearer and nearer.

Find more great books for exploring the past among our 2011 Best Books for Teens.

Montmaray is a tiny island kingdom off the Bay of Biscay founded by a Cornish Baron on the run from Henry VIII. Where on earth did it come from?

I wonder that myself, sometimes! It all began with an image of a girl sitting on a castle wall, writing in her diary. The castle suggested a kingdom, which led to the notion of an impoverished royal family with a turbulent history. Then I started doing some research, and whenever I discovered a fascinating fact, I threw that into the mix. Moroccan pirates raiding Cornish villages, Tudor kings beheading their adulterous wives, Portuguese water dogs getting tossed overboard as the Spanish Armada scuttled home, Basque fishermen and brandy smugglers and whalers—they all ended up as part of Montmaray’s “history.”

You pack an awful lot of history into your books, from the Spanish Civil War, early 20th-century communism and the rise of Nazism to the destruction of Guernica and the failed British policy of appeasement. Do you ever worry about leaving your teen readers behind?

I don’t expect my books to appeal to every teenager—what book does? I do believe that most teenage readers are smart and curious and passionate about their beliefs and eager to question authority. They may not always be drawn to nonfiction, but if complex political ideas are explored as part of an engrossing narrative, then that can be very appealing to teenagers.

So, when I write, I try to focus on my characters and their personal journeys, and I only discuss the Big Serious Topics if it’s natural for a character to be thinking about those issues. The political exposition is fitted in around Sophie attending debutante balls and house parties and going shopping and worrying about her love life, as well as moments of intrigue and adventure and humor, so hopefully, the novel never feels like a history textbook. It’s just a story that happens to be set in a time of political upheaval.

In a similar vein, many of your secondary characters are real people, like Kathleen “Kick” Kennedy. How did you approach folding them into the story of the very fictional but totally vibrant FitzOsbornes?

Oh, the Kennedys! Once I discovered they’d lived in London in the late 1930s, I couldn’t resist introducing them to the FitzOsbornes. It did help that my fictional characters were rich, charming and aristocratic and got invited to loads of parties. Even then, the plot required months of research and planning. I had to ensure the real people looked and talked the way they really did look and talk, and each of their interactions with the FitzOsbornes needed to advance my story. Fortunately, for me, not them, most of the real people are dead now, so they’re not very likely to complain if they disapprove of anything I’ve written.

Even as you tackle the big and dark themes of pre–World War II Europe, you also bring in issues that will feel very contemporary to readers, like Toby's sexual orientation.

I really don’t think of homosexuality as either “contemporary” or an “issue,” so I was rather bemused the first time someone mentioned that. Toby’s sexual orientation does create problems for him, partly because he’s expected to get married and provide an heir, but mostly because he’s in love with someone who doesn’t love him back in quite the same way. I think many readers, contemporary or otherwise, could relate to that (sadly).

Besides, I don’t regard “history” as “way back then, not relevant to now.” For example, as I was planning The FitzOsbornes in Exile, the newspapers were full of The Axis of Evil and The War on Terror, and the question of how democracies and the United Nations should deal with totalitarian regimes that might, or might not, be a threat to other countries but were certainly trampling on the human rights of their own citizens. There were such strong parallels with the appeasement of Fascist Italy and Nazi Germany in the 1930s and the failure of the League of Nations to prevent war. So, really, quite a lot of the book’s issues are “contemporary.”

Even though your story is set against this very serious and scary backdrop, one adjective Kirkus has applied to it is “frothy.” How did you prepare for walking this tightrope?

I love that adjective, thank you. I like “serious” history, but I also love reading about debutante gowns and wedding customs and what people ate for breakfast. The story’s told by Sophie, who’s an ordinary teenage girl in many respects. She’s interested in clothes and boys, she often finds her family embarrassing or exasperating, she has a sense of humor—and all of that is reflected in her diary. It would be very boring for me, and for my readers, if the books were unrelentingly serious. I do try to write in layers, and I hope the froth on top tempts some readers who usually avoid dark, dense concoctions.