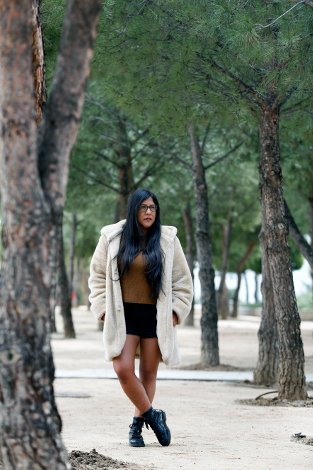 Few things scare men more than women—especially women writers—discussing sex. In this sense, the title of Gabriela Wiener’s Sexographies  seems like a taunt. Wiener, a journalist from Peru who now lives in Spain, understands this. “People looked at me in a strange way,” she tells me, “as if I wasn’t supposed to talk about sex—because I’m not ‘hot,’ I don’t get to talk about my body.” Her work—wide-ranging journalism and essays that deal with, among other things, dominatrixes, domestic and sexual violence, pornography, and sex gurus—has become a rebuke to this notion. She doesn’t want to sensationalize and doesn’t even want to necessarily scare. Rather, she wants to disrupt.

Because Wiener prefers to speak Spanish, and because I’m a dunce who speaks only English, she talks to me through a translator (Efrén Ordóñez, author and founder of the publishing house Editorial Argonautica), and I’m aware of the different levels of translation at work here: words from a writer being translated to me, on the subject of a collection of translated essays, essays that themselves translate personal experiences, now collected in a book that itself translated two earlier books—Sexografías and Llamada perdida—into a volume that puts into English the best of Wiener’s work (written over the course of ten years). They're the pieces that exemplify the writer she currently believes herself to be; there are levels of translation here, the final and most important being that this is Wiener translating herself and the scope of her career for a new audience.

But first, let me back up. If Sexographies sounds like a collection of personal essays, that’s not precisely true. In Sexographies, Wiener embeds herself with a polyamorous sex guru and a dominatrix, writes about transgender relationships and a camp for people faking their own deaths, and performs literary analysis on Isabel Allende, all with the same level of devotion to immersion. She knows her subjects, however and wherever possible. Wiener’s training was in the world of magazine writing. “I was reading the New Yorker and feeding off of that,” she tells me, though at the same time she and her peers were “developing our own ways of writing journalism.” And what was this way for Wiener? “It had to do with rupture.” While she found long-form journalism appealing, it was a different form she was after, something that put herself at the forefront, almost as the central character; after all, why establish a facade of distance? Distance is not what Wiener ever has in mind, not then, and not now.

But a strange thing happened to her along the way. Whatever Wiener was writing about—whether sexuality, or the body, or the outsiders she profiled—she felt that immersion was the journalistic point. But readers began to see something else. “I hadn’t labeled my work as feminist or political,” she says, but eventually Melusina, a publishing house in Spain, collected some of her work in an anthology. Her work began to find a new categorization beyond what she’d expected. “I always thought my work was more narrative,” she says, “so I was surprised to see it categorized as ‘gender studies.’ ” She has found new readers—in the United States, in South America, in Spain—who have now identified in her work something feminist, something political. “It’s empowering to see readers get now something I was writing about years ago.”

She mentions one piece in particular, one not actually collected in Sexographies: a profile of Nacho Vidal, a pornographic filmmaker in Spain. “I immersed myself in the world of Nacho. I wanted to get to know him, his entire world.” She did this as a journalist—one who never aims to make a subject seem weird or sensationalistic, or to write about sex for its own sake (“some people think I’m a sex columnist or a sex therapist,” she says, a bit bemused)—but contained in this piece were thornier subjects: “It questioned the idea of macho guys: Why do we like porn made for men? Why does machismo exist?” She describes to me a moment when Nacho Vidal ejaculated not on her face but instead on her shoes. “Does this suggest a different kind of pornography?”

To state it bluntly: It’s hard to imagine many writers putting themselves in a situation like that, where the ejaculate of their subject becomes a key philosophical underpinning of the piece. Yet it would also sound like a cliche to call Wiener “fearless”: for her, she plows into the world she’s writing about, whatever it is, as a journalistic imperative.

The last piece in Sexographies, titled “Impossible Interview with My Abuser,” is emblematic of this approach. In writing about the epidemic of domestic and sexual violence, she isolates a subject—an abusive relationship of her own—and dives in by actually involving the abuser in the piece: She interviews him, years after the fact. She places herself at the center of the piece but, in so doing, explores something much broader. “My intention,” she writes, “was to settle our mutual pending debts, to have a conversation where two people who desired, loved, and hurt each other when they were very young come together after many years and analyze their relationship in the light of everything they have since learned and processed. To me, that new light is feminism.”

“My book,” she tells me, “is my body, and the text is my body. Each story is a testimony.” For Wiener, “it’s important that I tell my stories with my face, my body, my skin color.” Wiener may not have started as a political writer. But now? “Literature used to just be white men writing, but now it’s about the rest, not just women, but everyone, everyone who can tell their stories and show themselves”—an immersion in the political.

Benjamin Rybeck is the author of a novel, The Sadness, and general manager of Brazos Bookstore in Houston.