George Bristol: 'On Politics and Parks' 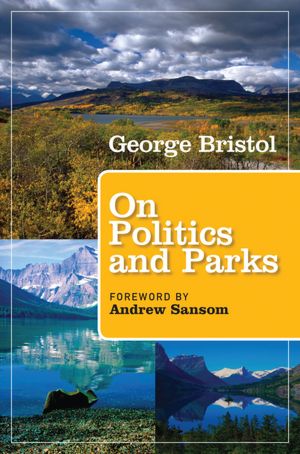 In 1961, 20-year-old Democratic activist George Bristol began the journey of his lifetime. The young man took a long train journey from his home in , to work for two summers in the wilds of . “Can you imagine awakening in the middle of paradise, going to breakfast with beautiful women and new friends, hiking through forests and around glacial lakes, climbing mountain trails into the clearest blue sky to work?” he asks in his new memoir, On Politics and Parks. A lifelong advocate for our nation’s National Park Service, recalls his influential career in politics and his heartfelt advocacy for ’s natural wonders.

Why did you decide to write this memoir?

First, I wanted to write something for my children and grandchildren. As I began to make notes, I saw the connections and threads come together. In early 2010, I got a call from the Thinking Like a Mountain Foundation. They offered me a two month writer-in-residence opportunity at . They wanted me to write about my conservation years. I agreed within the context of a broader memoir because I think it’s important to see how I and others get to the point where fate has us going in the first place.

You worked on many Democratic campaigns for the Presidency. Which one do you think was most pivotal, and why?

In hindsight, I think the Humphrey/Nixon election in 1968 was critical. I think if the country had any inkling of how tortuous the Nixon years would be, Hubert Humphrey would have been elected. Knowing what we know of history now, he should have been elected. He was certainly one of my favorite politicians, and he was a kind man. Even though he was tough on civil rights, he was a gentle man and the country needed that after the turmoil of the war and the Johnson years. I’d have to put the 1968 election as the most pivotal moment, even though it was a losing effort.

You were working at the Democratic National Party Headquarters when the Watergate burglary occurred, and later figured out that you met Howard Hunt. Did you realize at the time how significant that moment was?

Not at all. One of my jobs, among many others in the Treasurer’s Office, was to critique all the salespeople and pitch artists. In any given day at the DNC headquarters or our headquarters, I saw or talked to four or five idea peddlers of one kind or another. It was only after the fact, when I was watching the Watergate hearings on television and saw Hunt that it rang a bell. It wasn’t a monumental subject that he was selling, so it just came and went. But it was an interesting side note for me that I actually met the guy who broke into headquarters.

It’s my place of the heart. I feel strongly that the most fortunate people on Earth are those that find a place of the heart that is different from their home. and are awfully important to me, too, but Glacier was somewhere special. I always went back for my own renewal, but my family loved it, too. Eventually, I had to build a hotel or two just to make sure we had a place to stay. Even if I hadn’t built hotels, I would always make my way back to Glacier. Eventually, one thing led to another and I became one of the founders of Glacier National Park Foundation, which supports the park in various and sundry ways.

Why are parks such an essential part of American culture?

Wallace Stegner said the parks were, "the best idea we ever had. Absolutely American, absolutely democratic, they reflect us at our best rather than our worst.” He also said they speak to our better angels. The parks demonstrate a willingness by people great and not so great to buy or give lands, or set out with a group of people to protect various parts of this great and beautiful country.

I also think it’s one of our most original ideas. While education and public transportation and other issues are important, they came to us from and other cultures during The Renaissance. The idea of a country coming together and gifting itself great tracts of natural beauty or historic sites is an American ideal.

What did it mean to you to be appointed to the board of the National Park Foundation in 1994?

It is the only job that I ever sought. I really wanted to be on the board of the National Park Foundation. Even though I was offered other positions, I never wanted them. It took me more than a dozen years to get that position. It’s the best job I ever had, period. Someone once said that if you wake up every morning and feel good about what you’re doing, it’s the best job to have. It really was the fulfillment of my life’s goals.

What do you hope other activists learn from reading your story?

First, if you keep plugging away at something, the chances are that you’ll wind up with a positive result. You might not get everything you wanted, but the more you organize the more positive change you will create. Secondly, you have to have patience. It took six years just to get to first base on funding within the state parks here in . It took a lot of time and effort, but it was a worthwhile cause and the support is growing every day. Finally, particularly in this day, this work takes a sense of compromise, which is almost a curse word in politics today. There is no way we could have gotten the parks bill through without meeting others halfway. Learning to reach across the aisle and compromise where necessary is one of the purposes of this book. I hope, in some very small way, it will allow others to work together with some degree of purpose and civility.