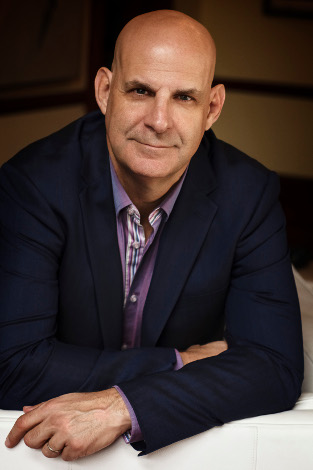 For mere mortal men, 28 novels would be the work of a lifetime spent crafting eerie tales of familial peril and sudden reversals. But for New Jersey-based bestselling novelist Harlan Coben, it’s just what’s on the way to number 29.

We’ve connected to talk about his new stand-alone novel, Fool Me Once, a twisty and surreally dark suburban drama with one hell of a shock waiting for readers at the end of it. Our portal into Coben’s world is Maya Burkett, a jaundiced former spec-ops pilot who has been released from service following a violent skirmish with enemy troops. She walked away; they did not.

If that’s not enough tragedy to visit on one person, Coben piles it up on Maya—not long after her sister Claire was murdered, her husband Joe is gunned down in Central Park, essentially dying in her arms. But things get weird when Maya looks in on the nanny cam she uses to keep an eye on her two-year-old daughter, Lily, and sees her dead husband resurrected from the grave.

With tight plotting, blinding reversals,. and devious storytelling, Coben spins a tale that is sure to pull the rug out from under even the most well-read thriller fans. In our review, Kirkus says, “Once again, Coben marries his two greatest strengths—masterfully paced plotting that leads to a climactic string of fireworks and the ability to root all the revelations in deeply felt emotions—in a tale guaranteed to fool even the craftiest readers a lot more than once.”

Usually Coben’s plots emerge from his own backyard in suburban New Jersey but for this novel, inspiration came from a trip to Kuwait.

“This one is a little different,” Coben says. “A couple of months ago, I went on a USO tour. They used to send Marilyn Monroe and now they get me, which is a crime. In this case, I met a longtime reader who was a female combat pilot. She’s nothing like Maya, being gregarious and outgoing, but she stuck in my head as someone who might be interesting to put in a situation where she comes home and something bad happens to her.”

Since Coben started focusing more time on stand-alone novels since 2001’s bestselling Tell No One, the books more and more often focus on families in peril.

“You know, I’m a suburban dad living in Ridgewood, New Jersey with four kids,” he laughs. “Partially, it’s writing what you know. I grew up in the suburbs outside of New York City and I write in the suburbs outside of New York City. I find it a really compelling place to write about. It’s funny because we think of living in the suburbs as an American experience and it really translates worldwide. I think it’s because we all get this idea. We all want to live in peace and harmony and raise our families with some degree of comfort and we don’t realize how quickly all that stuff can be taken away from us.”

Classically, most thriller writers fall into one of two camps: the obsessive planner who curates the plot like a museum exhibit, and those who live vicariously through their characters, discovering all manner of conspiracies along the way. I’m pleasantly surprised to discover that Coben is a bit of both.

“It’s probably more about finding my way,” he says. “I know the beginning and I know the ending. I compare it to travelling from my home state to California. I may head west on Route 80 but chances are I’ll go through the Suez Canal or make a stop in Tokyo. I never really know where the path is going to take me but I’m making sure we end up in California.”

Maya is a hard person in the original sense of the word, so I’m wondering how Coben captured her character.

“She’s not really classically maternal, nor did I want her to be,” Coben says. “You kind of start with a base about where she’s been and what her experiences have been. Once you get into that sort of skin, you start to react how she would react. I’m not a huge researcher but in this case, there were things I had to get right. I’ve been kind of shocked and pleased by all the

soldiers who have read it and said that I nailed what it’s like when they come home but also in the way the book portrays posttraumatic stress. A lot of times, it’s that silence when they don’t want to talk about something. It’s those scenes in the novel when Maya says, ‘You people just don’t get it.’ ”

Fans of Harlan Coben always have a new book to look forward to, but this spring they’ll get an additional treat in the British drama The Five, which starts April 15 on Sky TV in the United Kingdom. It’s the first original television series penned by the prolific author, and unfolds in 10 parts as it follows a group of friends united by a terrible event.

“I’m excited about it,” says Coben. “It was something I was going to write as a novel and I saw as more of a television series. I just saw it visually and wanted to try it. It’s a new way of storytelling for me. I’ve been sitting in a room working by myself my whole life so it’s really great to collaborate with directors and writers and actors and crew to create something as a team.”

“I still want to fool you,” he says. “I still want to change it up. I’m always trying to play with your expectations. I always want this book to be better than the last one. I have a great appreciation for the reader. For someone not only to walk into a bookstore and spend their hard-earned money but also commit to spending six or 10 hours with me? That’s a responsibility I take seriously.”

Clayton Moore is a freelance writer, journalist, book critic, and prolific interviewer of other writers. His work appears in numerous newspapers, magazines, websites and other media. He is based near San Francisco, California.