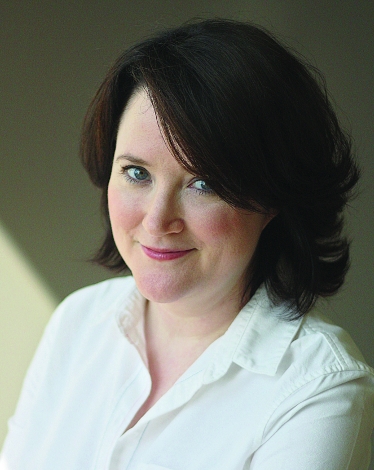 When Helen Ellis was in the eighth grade in Alabama, an algorithm determined she was destined to become a writer. Or, you know, something like it.

“When I was in the eighth grade in 1983, we were all doing the What Color Is Your Parachute? what-you-should-be test, and my result was I should be a writer or a mortician,” Ellis says. “I’m creative and I enjoy being alone, which also makes me a really good housewife.”

Today, Ellis is a housewife in the fabulous pre-war Upper East Side apartment building where her husband grew up. It’s a bit of good fortune that seemed to beget some bad manners from family and friends, at first.

“People kept asking me, What do you do all day?” Ellis says. “So I started the Twitter account @WhatIDoAllDay, and the first thing I wrote, which still applies today, was ‘crosswords.’ So I do crosswords, because that’s better than bran,” scatologically speaking, “—that is so foul, excuse me!—and then I live a lovely life. I will admit that I do do some writing. I take care of the house. I’ve taken up bridge. I play a lot of cards, you know. I see friends. I am a lady of leisure.”

Ellis is marvelously modest. “Play a lot of cards” means she’s a professional poker player who’s won big on the national circuit. (She mentored Colson Whitehead when he played in the World Series of Poker, as memorialized in The Noble Hustle.) “Some writing” means two unpublished novels, one published novel, and the funniest short story collection of 2016, American Housewife.

The collection’s first story, “What I Do All Day,” opens with stomp: “Inspired by Beyoncé, I stallion-walk to the toaster. I show my husband a burnt spot that looks like the island where we honeymooned, kiss him good-bye, and tell him what time to be home for our party,” she writes.

And a page later, the party is in full effect:

“I say, ‘My breath is the Pinot Grigio-est.’

“I say, ‘I am perfectly happy not being a Kennedy.’

“I say, ‘I’d watch a show called Ghost Hoarders. Why is that not a show?’”

(Why isn’t Ghost Hoarders a show? And if Ellis were to produce it for a mid-level cable network—another fine job for a creative type—what production problems might she plan for?

(“I would plan for boring ghosts,” she says. “People who are dying in their homes today, I mean, what are you going to see their ghost doing, texting in the corner? I feel like ghosts aren’t going to be as exciting as they once were, they’re just going to be on their little ghosty phones or sitting there with a cup of ramen noodles. So I would plan for that.”)

The stories in American Housewife are the stuff of typical Upper East Side days: planning parties, playing cards, occasional murders, ghosts, book clubs, reality television, writing, cats, wainscoting and Tory Burch tunics. Ellis writes like she talks, and the results are as effervescent and intoxicating as champagne punch. In “Southern Lady Code,” for example, she enumerates the differences between what one says in polite company and what one means:

‘You are so bad!’ is Southern Lady code for: That is the tackiest thing I’ve ever heard and I am delighted that you shared it with me.

‘She has a good time,’ means slut.

‘Hmm’ is Southern Lady code for: I don’t agree with you but am polite enough not to rub your nose in your ignorance.

‘Nice talking with you’ is code for: Party’s over, now scoot.

A fluency in high society doublespeak isn’t lying, per se—Ellis just happens to excel at bluffing and inventing the truth.

“All poker is is lying,” she says. “It’s very natural to me,” she says—especially when it comes to poker, where a supermajority of her competitors are male. “They don’t think that I’m going to lie to them, whereas every other situation in life I think men think women are lying to them.”

Writing fiction provides another outlet to exercise her creativity. “There’s of course a little truth in everything—the three novels in a drawer that really are in a drawer—but I love to lie [in fiction],” she says. “I don’t get the opportunity, or I don’t take the opportunity, in any other aspect of life than writing or poker.”

“It’s true! It’s true! I really can’t think of the last time I lied outside of poker or writing,” she says. “Instead of lying, I’ll just sort of state the obvious like, Oooe! Look at that baby! instead of What a beautiful baby!”